"We Have Come to Stand With You"

Today, fourteen American activists with the grassroots group Witness Against Torture are holding a vigil outside Guantánamo prison in a gesture of solidarity with the dozens of Muslim men who remain imprisoned there after nearly fourteen years without charge. Their message is simple: “We know you are suffering; we have come to stand with you.”

In a place designed to dehumanize everyone it touches, this simple act of compassion has real power. My colleague Omar Farah saw it firsthand when he told our client Tariq Ba Odah that a group of activists from America would be spending Thanksgiving Day on the other side of the prison wires, fasting and sharing poetry to protest the injustice and cruelty of his detention. 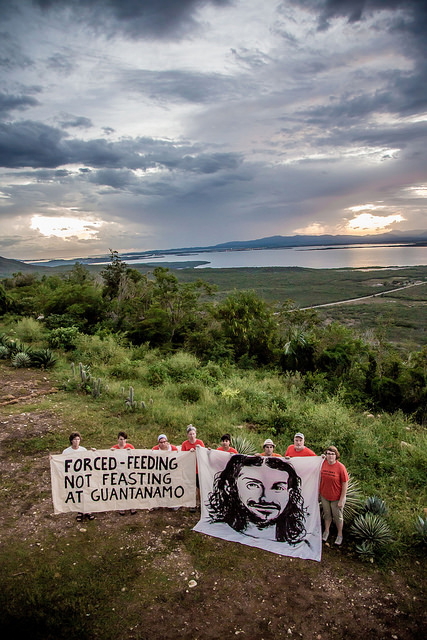 Witness Against Torture activists hold a banner of

In the loud and ill-informed public debate about the closure of Guantánamo, the suffering and anguish of those who remain trapped in its limbo are largely ignored. Even allies who advocate for the prison’s closure cling to political reasons or self-serving myths about American morality: Guantánamo is a recruitment tool for terrorists, a waste of taxpayer money costing an average of $3 million per detainee per year, “it is not who we are.”

For Witness Against Torture, compassion for those unjustly detained at Guantánamo and recognition of their torture, despair, and separation from their families, have always been the force that drives their activism. Founded in 2005 after 25 activists travelled to the city of Guantánamo, Cuba, and attempted to visit the prison, Witness Against Torture has played a key role in keeping the spotlight on the cruelty and injustice of Guantánamo. Through demonstrations and vigils, weekly fasts for justice, street theater, and art, their tenacity and creativity has brought their Close Guantánamo campaign to all corners of the United States and directly to the White House, Supreme Court, and Congress.

Today, ten years later, they are back outside the prison, standing under the banner “Forced-Feeding, Not Feasting at Guantánamo,” to protest the continued forced-feeding of hunger strikers like Mr. Ba Odah and the cruel reality that most of the men there do not know when or if they will ever see freedom. In the absence of their own homecoming, these activists are bringing humanity to the prisoners.

The protest comes at a significant moment. The Obama administration is finalizing its plan to close Guantánamo, which will likely involve bringing a number of prisoners to the United States for continued detention without charge. Like us at CCR, the activists with Witness Against Torture know that it is the barbaric practice of indefinite detention, the selective denial of due process for Muslim men, that needs to end. And just yesterday, President Obama gave in to political opponents by signing into law the 2016 National Defense Authorization Act (NDAA), preserving Congressional restrictions on detainee transfers.

With the Obama administration entering its last year, we are coming to a critical juncture in the history of the prison. It is not just the President’s legacy that is on the line; the lives of men like our clients Tariq Ba Odah, Fahd Ghazy, Mohammed Al Hamiri and Ghaleb Al-Bihani hang in the balance. Today, as I gather with friends and family, I will give thanks for not being alone in this effort, for having allies like Witness Against Torture who will continue to stand up to the injustice of indefinite detention no matter where it takes place.