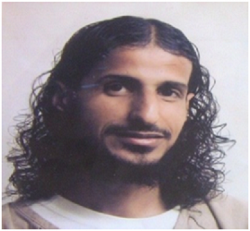 Tariq Ba Odah was born in 1978 in the Shabwah district of Yemen where he lived until the age of one. He spent his adolescence and early adulthood in Jeddah, Saudi Arabia, surrounded by his loving parents and many brothers and sisters. Like so many others at Guantánamo, Ba Odah was picked up in Pakistan by local authorities and turned over to the United States military, which hooded and shackled him and sent him to Guantánamo. Ba Odah reports that, to this day, he still does not know the true justification for his initial arrest. In early February 2002, when Ba Odah arrived at Guantánamo, he was only 23 years old. Those early years of his imprisonment were marked by what Ba Odah describes as merciless psychological and physical torture.

Over the course of his imprisonment at Guantánamo, Ba Odah lived on just the memory of his childhood. According to Ba Odah, he enjoyed an idyllic, peaceful upbringing. His father’s priority was to ensure a happy and peaceful living for the family by providing for them and enabling them to receive an education in the local schools, and his mother “was always a symbol of love and giving.” His childhood within a tight-knit family is his most treasured memory because it is the only part of his youth that he was able to live freely. “We lived a wonderful life, full of happiness and respect,” Ba Odah remembers when thinking about his life before Guantánamo, “but all this changed since my capture.”

In 2007, Ba Odah began a hunger strike to peacefully protest his indefinite detention, vowing to continue his hunger strike until he is allowed to return to his family. Dreaming of that moment, Ba Odah said he would kneel and thank God for the blessing of freedom and then embrace his smiling mother. On April 16, 2016, he was released to the Kingdom of Saudi Arabia.

"A captive does not possess any realistic means to send his messages to the world other than to strike. There is nothing greater to a human being than his religion and his freedom. And for it all dangers become small." Tariq Ba Odah, Guantánamo Bay, Cuba