CCR and Palestine Legal are advocating on behalf of Fordham students who were denied permission to start Students for Justice in Palestine (SJP) at the university and then disciplined for protesting...

Bronner v. Duggan is a case filed by four American Studies Association (ASA) members against the ASA and ten individuals following the organization's passage of a resolution to endorse and honor the...

Accountability for International Crimes in Palestine

On January 2, 2015, the State of Palestine acceded to the Rome Statute of the International Criminal Court (ICC), and, on April 1, 2015, Palestine became the 123rd Member State of the ICC . Palestine...

Jordahl v. Brnovich is a case that challenges Arizona’s 2016 anti-BDS law that forbids the state from contracting with companies that boycott Israel. The Center for Constitutional Rights and...

Arkansas Times v. Waldrip is a case that challenges a 2017 Arkansas anti-BDS law that requires companies that contract with the state to pledge not to boycott Israel or reduce their fees. The Center...

The US Campaign for Palestinian Rights (USCPR) is a national coalition of hundreds of groups working for freedom, justice, and equality, and one of the oldest and largest Palestine solidarity...

Representing current and former Olympia Food Co-op board members who are being sued over their decision to boycott Israeli goods.

Amawi v. Paxton and Pluecker, et al. v. Board of Regents of the University of Houston System, et al. are two consolidated cases that challenge the 2017 Texas anti-BDS law that forbids the state from...

A federal class action lawsuit against Avi Dichter, former Director of Israel's General Security Service (GSS), on behalf of Palestinians who were killed or injured in 2002, when a one-ton bomb was...

CCR submitted an amicus brief in this case on behalf of the parents of Furkan Doğan , who was killed in the 2010 attack on the Gaza Freedom Flotilla . The flotilla, which carried more than 700...

A lawsuit against the University of Illinois at Urbana-Champaign for firing Professor Steven Salaita from a tenured position over his tweets critical of Israel’s summer 2014 attack on Gaza.

An effort by CCR and allies on behalf of descendants of those buried in the Mamilla Cemetery to stop its destruction to make way for the Simon Wiesenthal Center’s “Museum of Tolerance.”

Mr. Abdel-Muhti was a stateless Palestinian born in the Ramallah district of the West Bank in August 1947. Because he left the West Bank before the Israeli takeover in 1967, he could not receive...

In the Matter of Hamide and Shehadeh

These two deportation cases involve two Palestinian activists, Khader Hamide and Michel Shehadeh, whom the government have attempted to deport since 1987. They argue that Hamide and Shehadeh’s lawful...

CCR has long challenged impunity for the Israeli government’s violations of international law related to its illegal occupation of Palestine, U.S. support that enables Israel’s violations, and efforts to punish activists for speaking out in solidarity with Palestine. We have sought transparency and accountability for Israel’s deadly attacks on a 2010 flotilla that sought to break the blockade on Gaza and the U.S. knowledge of and response to the attack; sued Caterpillar for providing bulldozers to Israel, knowing they would be used to unlawfully demolish Palestinian homes; and litigated to hold Israeli officials responsible for war crimes. We have also litigated to protect speech in the U.S. on this critical issue; challenged the selective enforcement of immigration laws in defense of Palestinian activists singled out for deportation because of their political beliefs; and partnered with Palestine Legal to document efforts to silence advocates for Palestinian human rights and provide them with legal support and advocacy. This work fits into the Center’s longstanding commitment to international accountability for human rights abuses wherever they occur; to protecting the right to dissent; and to speaking up for what is right, even before it is popular.

Eugenics and Ethnic Cleansing: The Values that Unite the US and Israel

... A “progressive” Jewish organization that calls attention to such issues, Bend the Arc fails to make the connection with Israel’s treatment of Palestinians, also genocide as defined by the Center for Constitutional Rights. ... Read the full piece here .

... The decision on June 19, 2020 , by two Republican appointees and one Democratic appointee, continues a string of victories for the ASA in a case it has defended since April 2016 . Thomas C. Mugavero of Whiteford, Taylor &amp; Preston L.L.P. argued the cause for appellees with counsel on the...

From Silwan to DC, the Jewish National Fund is enabling Israeli annexation

... Many Americans thankfully cherish our right to free speech, which includes our ability to criticize Israel, our own U.S. government, and others around the world. This is why the Center for Constitutional Rights has filed a motion to dismiss the JNF’s lawsuit on the grounds that it makes...

...But 20 groups including IfNotNow, CODEPINK, Jewish Voice for Peace Action, Defense for Children International-Palestine and the Center for Constitutional Rights expressed their support for the letter. "As the people rise up across this country in protest of systemic anti-Black racism and demand...

Tlaib, Ocasio-Cortez and others sign letter amid calls on Israel to cease annexation of West Bank

...“We write to you to express our deep concern over the planned annexation of occupied Palestinian territory by the government of Israel,” says the letter signed by Tlaib. “Prime Minister Benjamin Netanyahu has said annexation could begin as early as July 1, 2020. “Should the Israeli government...

Tell Your Lawmakers to Have No Association With ALEC!

Coalition Letter: 100+ organizations call on ICC States Parties to demonstrate support for an independent ICC and impartial international justice in the face of U.S. and Israeli attacks

END_OF_DOCUMENT_TOKEN_TO_BE_REPLACED

Three Things You Should Know About Airbnb Business decisions play an important role in the protection of human rights. In situations of ongoing and grave human rights violations, businesses that claim neutrality serve to uphold the unjust and often deadly status quo. This is as true for Airbnb's...

Originally published by TomDispatch. I never intended to run a marathon, but when I realized that I would be on hand for the 2019 Palestine Marathon, I registered. I did so in solidarity with the goals of the aptly named Right to Movement, the global running community founded in 2013 to organize...

We've sued the Israeli settlers suing Airbnb The booking platform Airbnb recently decided to remove listings for Israeli settlements in the West Bank in the occupied Palestinian territory. Dual Israeli-U.S. citizen settlers whose listings are to be removed and potential renters sued Airbnb,...

“Concerted attempts to silence criticism of Israel in the U.S” Maria LaHood 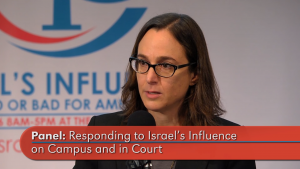 Detained and Then Deported: U.S. Human Rights Lawyers Barred from Entry into Israel