Stop and Frisk: The Human Impact

The Stories Behind the Numbers, the Effects on our Communities
January 15, 2009 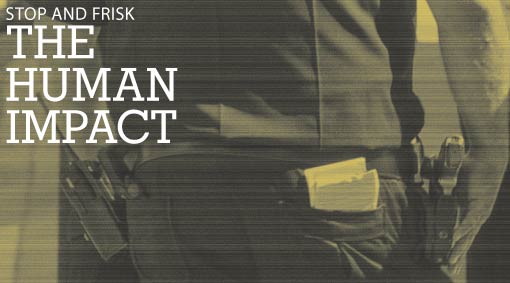 On July 26, 2012, the Center for Constitutional Rights (CCR) released, “Stop and Frisk – The Human Impact: The Stories Behind the Numbers, the Effects on our Communities,” a report documenting the human impact of the New York Police Department’s (NYPD) stop-and-frisk practices.

The New York City Police Department’s (NYPD’s) aggressive stop-and-frisk practices are having a profound effect on individuals, groups, and communities across the city. This report, released in 2012, documented some of the human stories behind the staggering statistics and shed new light on the breadth of impact this policy has had on individuals and groups, in neighborhoods, and citywide.

The Center for Constitutional Rights conducted a series of interviews with people who have been stopped and frisked by NYPD and heard testimonies from a wide range of people living under the weight of the unprecedented explosion of this practice. These interviews provide evidence of how deeply this practice impacts individuals. The report also documented widespread civil and human rights abuses, including illegal profiling, improper arrests, inappropriate touching, sexual harassment, humiliation, and violence at the hands of police officers. The effects of these abuses can be devastating and often leave behind lasting emotional, psychological, social, and economic harm.

The NYPD stop-and-frisk program affects thousands of people every day in New York City, and it is widely documented that an overwhelming majority of those people are Black or Latino. This report shows that many are also members of a range of other communities that are experiencing a devastating impact from this program, including LGBTQ/GNC people, non-citizens, homeless people, religious minorities, low-income people, residents of certain neighborhoods, and youth. Residents of some New York City neighborhoods described a police presence so pervasive and hostile that they felt as if they were living in a state of siege.

What these stories describe are widespread and systematic human and civil rights violations against thousands of New Yorkers on a daily basis.

This report accompanies CCR's advocacy and organizing efforts to address discrimination, misconduct, and abuse by the police through the Communities United for Police Reform campaign, and our legal challenge, Floyd, et al. v. City of New York, et al., a federal class action lawsuit against the NYPD and the City of New York that successfully challenged the NYPD’s practices of racial profiling and unconstitutional stops and frisks.

Stories of Stop and Frisk

Listen to audio of people telling their stories about being stopped by the New York Police Department (NYPD).
Read More

A federal class action lawsuit against the City of New York that challenges the NYPD's practices of racial profiling and unconstitutional stop and frisks.

Joint Remedial Process in Floyd v. City of New York: What You Need to Know

Overview: In August 2013, a federal judge found that the New York Police Department (NYPD) had engaged in a widespread practice of unconstitutional and racially discriminatory stops and frisks and...

“My Badge Number Is `F*ck You’”: Why New Yorkers Need the Right to Know Act

When Laverne I. and her husband were stopped by the NYPD while simply walking down the street, she asked one of the officers for his badge number as they began to search her husband’s pockets. The...

This page contains summaries and transcripts from each day of the Floyd v. City of New York trial. The transcript is at the end of each day’s update. #NYPDonTrial ul.drawers,ul.drawers ul{...
Read More