“My Badge Number Is `F*ck You’”: Why New Yorkers Need the Right to Know Act

When Laverne I. and her husband were stopped by the NYPD while simply walking down the street, she asked one of the officers for his badge number as they began to search her husband’s pockets. The officer told her, “My badge number is `fuck you.’” Stories like Laverne’s were extremely common among New Yorkers I interviewed for CCR’s report “Stop and Frisk: The Human Impact”— stories of people who had been unlawfully stopped by the NYPD, who had no idea why they were stopped, who were tricked into consenting to otherwise unlawful searches, and who did not know the names of the officers who stopped them. 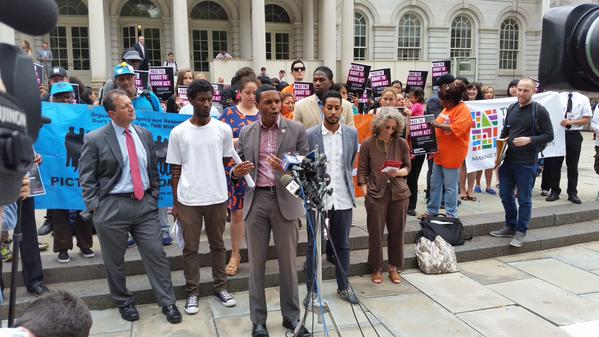 City Council Members and activists speak during a press conference in front of City Hall.

This Monday, the New York City Council held a hearing on the Right to Know Act, a package of legislation comprised of two bills that would protect the civil and human rights of all New Yorkers during everyday interactions with the NYPD. This common-sense legislation would require NYPD officers to explain why they are stopping someone, identify themselves to the public, document consent to a search, and provide information to those they stop and search about how they can file a complaint about police conduct.

During Monday’s hearing, community members, advocates, and experts testified about the importance of the legislation and described how the Act will promote communication, transparency, and accountability during police encounters. The Act was also recently endorsed by President Obama’s Task Force on 21st Century policing.

The bills within the Right to Know Act build upon the 2013 Community Safety Act (CSA), which created an office of the Inspector General of the NYPD and enacted a comprehensive ban on profiling. It aims to increase the accountability of the NYPD and curtail bias-based encounters with officers. Though former Mayor Bloomberg attempted to block the CSA, coordinated efforts for many months by Communities United for Police Reform successfully ushered the bills into law.

Along with the Joint Remedial Process that came out CCR’s landmark case against the NYPD’s stop-and-frisk practices, Floyd v. City of New York, legislation like the Community Safety Act and the Right to Know Act will help create a city in which the rights of all New Yorkers are protected.

Laverne and all New Yorkers have the right to know why police officers interact with them, the identities of those officers, and the ways to complain when they feel they have been subjected to misconduct or unlawful or unconstitutional police activity.  With the Right to Know Act, that day may finally come.