On September 9, 2008, the United States District Court in Manhattan ordered the New York Police Department (NYPD) to provide all of its UF-250, or “stop-and-frisk,” 1 data from 1998 through the first half of 2008 to the Center for Constitutional Rights (CCR). Judge Shira Scheindlin ruled that the NYPD failed to prove that the law enforcement privilege protects the NYPD from having its questionable stop-and-frisk practices exposed to public scrutiny and further, that all of the data, other than personal identifying information of police officers and persons stopped, could be made available to the public.

The order was the result of a discovery request, served on the City of New York in April 2008, seeking production of the data as part of an ongoing civil rights lawsuit filed on January 31, 2008. CCR filed the lawsuit on behalf of plaintiffs who allege they were illegally stopped and frisked on one or more occasions by NYPD officers without reasonable suspicion and because of their race. The lawsuit, Floyd, et al. v. City of New York, et al., filed, alleges that the NYPD engages in racial profiling and suspicionless stop-and-frisks of law-abiding New York City residents. The named plaintiffs in the litigation - David Floyd, Lalit Clarkson, David Ourlicht and Deon Dennis - represent hundreds of thousands of New Yorkers who over the past several years have been stopped on the way to work, in front of their homes or just walking down the street without any cause, primarily because of their race or ethnicity. In a preliminary review of the data provided by the City, CCR made the following findings:

The proportion of stops-and-frisks by race does not correspond with rates of arrest. Arrest rates during the period of 2005 through the first half of 2008 were low for all racial groups at between 4 and 6 percent of all NYPD-initiated stops during that period. 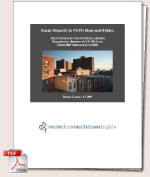 The UF-250 data provided by the NYPD plainly demonstrate that Black and Latino New Yorkers have a greater likelihood of being stopped-and-frisked by NYPD officers at a rate significantly disproportionate to that of White New Yorkers. That NYPD officers use physical force during stops of Blacks and Latinos at an exceedingly disproportionate rate compared to Whites who are stopped, and that this disparity exists despite corresponding rates of arrest and weapons or contraband yield across racial lines, further supports claims that the NYPD is engaged in a pattern of racial profiling in its stop-and-frisk practices. The findings of this preliminary review of the data are presented in greater detail therein.

NOTE: The data and statistics used to produce this report are available as a Microsoft Excel spreadsheet using this download link. If you are interested in having the entire 2005 - 2008 data set produced by the NYPD (on 1 DVD), please send a request email to stopandfriskdata@ccrjustice.org. A database program such as Microsoft Access will be helpful in reading and interpretting the information.

Floyd, et al. v. the City of New York, et al. stems from CCR's landmark racial profiling case, Daniels, et al. v. City of New York, et al. - filed in the wake of the Amadou Diallo shooting – that led to the disbanding of the NYPD's infamous Street Crime Unit and a settlement with the City in 2003. The Daniels settlement agreement required the NYPD to create and maintain a written anti-racial profiling policy that complies with the United States and New York State Constitutions, as well as to provide stop-and-frisk data to CCR on a quarterly basis from the last quarter of 2003 through the first quarter of 2007. A prior analysis of the data revealed that the NYPD engaged in stop-and-frisks without suspicion and based on race. While CCR was in possession of the UF-250 data for these years, all the data and the analysis of it were under a protective order that prohibited release to the public.

The UF-250 data was produced to CCR as database files for each year required under Judge Scheindlin's Order. Each file contained data from the stops-and-frisks recorded by NYPD officers for the given year. Each database file contains approximately 250 fields, corresponding with fields from the paper-based UF-250 forms that NYPD officers are required to complete each time a stop is initiated. This report includes an analysis of key data fields relevant to the Floyd litigation. Fields analyzed include stops, frisks, arrests, summons, weapons and contraband yield, use of physical force and combinations of these. Non-integer percentage numbers, e.g. 32.72 percent and 32.49 percent, were rounded up by the hundredths decimal to the nearest integer. For example, 32.99 percent is calculated as 33 percent, as is 32.49 percent.

In order to view this chart or graph, it appears as though you need to upgrade your Flash Player. Please use this Adobe website: Adobe Flash Player

The number of frisks conducted by the NYPD continues to increase. In 2007, although the NYPD made 34,000 fewer stops than in the previous year, nearly 28,000 more frisks were conducted for a total of 245,033. During the first half of 2008, the NYPD made 145,323 frisks; based on this trend, it can be projected that over 290,000 frisks will have been conducted by the end of 2008 – a record number of NYPD-initiated street encounters resulting in frisks for any single year of publicly available data.

Already, individuals stopped had a 42 to 43 percent likelihood of being frisked by the NYPD in 2005 and 2006, respectively. Since 2007 however, this likelihood increased by 10 percent. This denotes a steady increase in stops resulting in frisks by the NYPD. This is true even for Whites, of whom approximately 28 percent were frisked in 2005 and 2006 and 41 percent were frisked in 2007 and the first half of 2008.

You need to upgrade your Flash Player Regardless of race, an average of 97.6 percent of stops made by the NYPD from 2005 through the first half of 2008 resulted in neither weapons nor contraband yield. The UF-250 form describes the use of physical force, as the use of the following weapons and tactics: Between 2005 and June 2008, the mean percentage of stops involving the use of physical force by the officer leading to an arrest was 12 percent. In other words, 88 percent, or 328,589 of the 373,233 encounters in which physical force was used, did not result in arrest. See Figure 8. As illustrated in this preliminary report, the NYPD's UF-250 data plainly demonstrate that Black and Latino New Yorkers have a significantly greater likelihood of being stopped and/or frisked by NYPD officers than White New Yorkers. The racial disparity in the rate at which NYPD officers use physical force during stops-and-frisks further substantiate Floyd's claims of racial profiling. The disparity is even more distressing when compared to corresponding rates of arrest and weapons or contraband yield by race. CCR seeks judicial remedies through the Floyd case, which will be defined through the course of the litigation. At the same time, CCR advocates for a range of institutional and community-based changes that may overlap, but are independent from, the litigation remedies.

B. INDIVIDUAL AND COMMUNITY RESPONSE

An initial review of the data provides plain evidence that the NYPD has continued to stop, question and frisk an alarmingly high number of New Yorkers each year. The NYPD claims that initiating and conducting nearly 1,600,000 stops-and-frisks over a period of almost 4 years is an effective and legitimate means of crime reduction. The NYPD's own stop-and-frisk data, however, does not support its aggressive stop-and-frisk practices.

While Blacks and Latinos are far more likely than Whites to be frisked during an NYPD initiated stop, the percentage of frisks resulting in arrests is correspondingly low across race. This provides strong evidence that the NYPD is not only exceedingly indiscriminate in its frisks of Blacks and Latinos, but also conducts such frisks without reasonable suspicion, raising legitimate concerns that such frisks may be racially pretextual.

The remarkably low rates of NYPD initiated stops-and-frisks that result in arrests, summons, weapons and/or contraband yielded make evident the ineffectiveness of this unconstitutional practice. In addition to the illegality and unconstitutionality of unwarranted stops, the racial disparity exhibited in the NYPD's aggressive stop-and frisk practices only serve to strain an already complex relationship between the NYPD and communities of color. The excessive use of physical force in nearly 1 out of 4 stops - particularly when the majority of stops-and-frisks of Latinos and Blacks do not result in arrest - promote continued mistrust, doubt and fear of police officers in communities of color already scarred by major incidents of police brutality.

Racial profiling is a violation of fundamental rights and protections of the United States Constitution and the Civil Rights Act of 1964. CCR seeks judicial remedies through the Floyd case, which will be defined through the course of the litigation. At the same time, CCR advocates for a range of institutional and community-based changes that may overlap, but are independent from, litigation remedies, both with the common goal of restoring and protecting the constitutional rights and quality of life for all communities.

1“Stop-and-frisk,” also referred to as “stop-question-and-frisk,” is a practice by which an NYPD officer initiates a stop of an individual on the street. Frisks are legally permitted only when the officer believes the individual poses an immediate threat to the officer or people in the immediate area. Stops may result in arrest or the issuance of a summons to the individual. Stops-and-frisks are often used in “quality of life” policing models.

2This analysis of the data does not necessarily reflect the conclusions, evidence and arguments that will be presented by plaintiffs in the Floyd litigation.