Joint Remedial Process in Floyd v. City of New York: What You Need to Know

In August 2013, a federal judge found that the New York Police Department (NYPD) had engaged in a widespread practice of unconstitutional and racially discriminatory stops and frisks and ordered a collaborative, joint remedial process (JRP) to develop a set of reforms to help bring the NYPD’s stop-and-frisk practices into compliance with the Constitution. The JRP was envisioned to solicit ideas for additional reforms from communities most impacted by stops and frisks. In addition to community stakeholders, the process included  the City, members of law enforcement, local elected officials, organizations with expertise in policing, and criminal justice attorneys representing the plaintiffs. This process echoes a similar process successfully implemented in Cincinnati, Ohio over a decade ago to address systemic abusive and biased policing practices. The JRP was led by the court-appointed facilitator, Hon. Ariel Belen. The JRP was designed to ensure that communities who were directly affected by these practices had direct input into shaping the future of stop and frisk in New York. Judge Belen issued his final report and recommendations in May 2018.

What Is the Joint Remedial Process?

In August 2013, after a nine-week trial, the court found that the NYPD’s practice of stop and frisk was unconstitutional and racially discriminatory and ordered the NYPD to engage in this Joint Remedial Process. In its ruling, the court specifically wrote that meaningful and lasting reform requires the support and involvement of the people most affected. As the court emphasized:

The purpose of the Joint Remedial Process, as stated by the court, was to develop a set of reforms with the direct input of the people most affected by the NYPD’s discriminatory stop-and-frisk practices. Those reforms were aimed to supplement the reforms to policies, trainings, supervision, discipline, and monitoring being developed by the plaintiffs, the NYPD, and the court-appointed monitor in the Floyd v. City of New York lawsuit.

What Did the JRP Final Report Recommend?

This landmark community input process, ordered by the court to address the NYPD’s constitutional violations, was conducted over a three-year process, confirming a significant number of experiences of affected New Yorkers. Judge Ariel Belen outlined 14 specific reform recommendations based on the community input, and a series of policy reforms that merited further consideration. After he issued the report, we asked the court to order the NYPD to implement his suggested changes.

Since the final report was issued, three of the JRP recommendations have been ordered by the court (including a pilot to activate body-worn cameras at lower level encounters; the documentation of level 1 and level 2 stops, and creating permanent structures for officer feedback), and another 11 remain to be considered. These oustanding recommendations include but are not limited to: publishing a monthly NYPD discipline report; the development of a discipline matrix; improving access to stop reports for the public; developing a community body to help implement reforms and assess compliance with the reforms; developing SQF (Stop Question Frisk) training related to interactions with people with disabilities; implementing more training around LGBTQI communities and adherence to the 2012 Patrol Guide revisions; and issuing civil summonses for trespass offenses, among others. The Floyd facilitator also made a number of related policy recommendations.

The JRP final report also included reforms for two related cases known as Davis and Ligon. Both the Davis and Ligon cases challenged NYPD practices beyond stop and frisk.

Throughout the JRP, the Center for Constitutional Rights, as lead counsel for the Floyd plaintiffs, worked diligently with the facilitator to ensure a meaningful and robust process.

How Did the Facilitator Design the Floyd Joint Remedial Process and Receive Community Input?

The JRP included a series of consultations, including:

(1) focus groups of those most affected by the NYPD’s unlawful stop-and-frisk practices;

The committee was comprised of JRP stakeholders including Floyd plaintiffs; representatives from affected communities, including members of Communities United for Police Reform; NYPD leadership; and religious and academic leaders, and was convened to advise Judge Belen and his staff on how to structure the JRP.

Forty focus groups, each comprised of eight to ten members from communities across the city, were convened by Judge Belen and his staff in collaboration with several grassroots organizations around the city to elicit input on potential reforms. The Floyd focus groups were conducted through February 2016.

Participants were selected in collaboration with community organizations. We worked to ensure that the focus group participants represent a cross-section of those most affected by the NYPD’s practices, including young Black men, LGBTQI youth of color, homeless people, immigrants, public housing residents, and people recently released from prison. We reviewed and analyzed transcripts from each focus group as well as common themes for recommended reforms.

Nearly 30 community forums were held throughout New York City in order to afford the public the opportunity to weigh in on proposed reforms and comment on themes and findings from the focus groups. Nine of these forums were organized by Communities United for Police Reform.

Judge Belen and his team held a series of informal “leadership” meetings with representatives from some of the JRP stakeholder groups as well as organizations with expertise in criminal justice and/or policing to solicit additional ideas for potential reforms.

The facilitator issued a final report with recommended reforms compiled from the input gathering process.

Learn more about how we got here: 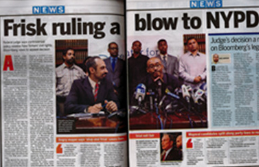 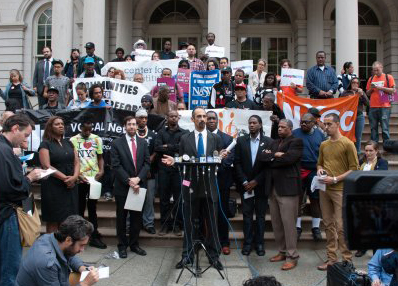 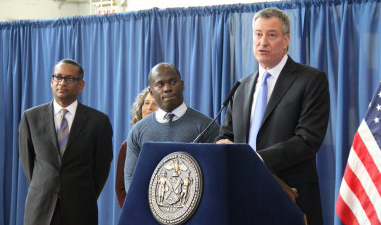 CCR meets with the monitor and facilitator to discuss immediate reforms and the collaborative Joint Reform Process (JRP).