CCR News: On the march against white supremacy

On the march against white supremacy 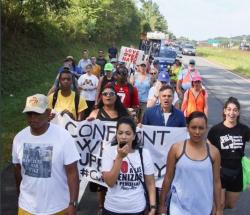 CCR joined our allies from the Movement for Black Lives, Color of Change, the Women’s March, and many other organizations and people of faith for the 110-mile “March to Confront White Supremacy” from Charlottesville, VA to Washington, D.C. CCR’s Stephanie Llanes wrote on day one, “we will march to the White House to confront white supremacy’s presence, that which runs deep in both our present government and our past history. In doing so, we demand that President Trump be removed from office.”

CCR spoke out against Trump’s plan to lift limits on the provision of military gear to local police departments, issuing a statement decrying the many ways this administration has declared it open season on people of color. We stand with communities who are resisting the terror of escalating state violence and the militarization of communities of color. Together, we will continue to affirm that Black lives matter. 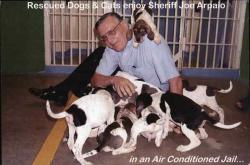 Joe Arpaio openly defied the law, the courts, and the Constitution, racially profiling and terrorizing Latinx communities in his fiefdom in Maricopa County for decades. He also plied his own brand of twisted cruelty, forcing the people he locked up to use only postcards of his own design to communicate with family and loved ones. The most grotesque bears an image of Arpaio surrounded by puppies with the text, “Rescued Dogs & Cats enjoy Sheriff Joe Arpaio in an Air Conditioned Jail…” On the back of the card, in small lettering, it continues: “While inmates live in the desert’s Tent City, rescued dogs and cats enjoy the air conditioned comfort of a converted jail.”

CCR’s Ian Head wrote on our blog about “Arpaio's Postcards from Hell” and the hundreds we’ve received over the years from people seeking copies of the Jailhouse Lawyer’s Handbook we publish with the National Lawyers Guild. Dedicated activists on the ground in Arizona finally pushed their white supremacist sheriff out. Together, we’ll do the same for Trump!

CCR client Djamel Ameziane was held without charge at Guantanamo for nearly 12 years, tortured, and forcibly repatriated to Algeria despite having fled violence and persecution for belonging to an ethnic minority. On Thursday, CCR and our allies at the Center for Justice and International Law (CEJIL) will represent him at a major hearing before the Inter-American Commission on Human Rights, requesting that the commission establish the United States’ responsibility for the serious human rights violations committed against him and recommend reparations. 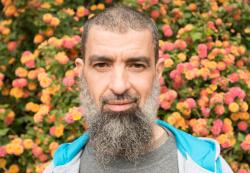 Djamel is unable to travel from Algeria to Mexico City to give testimony in person to the Commission, but he will certainly be following the hearing. You can, too. It will be livestreamed on the Commission’s website. And you can show your solidarity  by writing a message of support for Djamel, who has demonstrated tremendous courage by continuing to fight for justice. Your words mean a great deal, and will remind Djamel that he has a community of supporters around the globe, and that so many of you continue to stand up against indefinite detention and torture at Guantánamo.This is the first time the Trump administration has been invited to brief an international human rights body on its policies regarding a former Guantanamo detainee and the detention center, which Trump has vowed to not only keep open, but fill up again. With you, CCR will fight him every step of the way!

Meanwhile, Djamel is unable to travel from Algeria to Mexico City to give testimony in person to the Commission, but he will certainly be following the hearing. You can, too. It will be livestreamed on the Commission’s website.