Stories of Survival: Surviving the post-9-11 human rights crisis and reclaiming rights for all 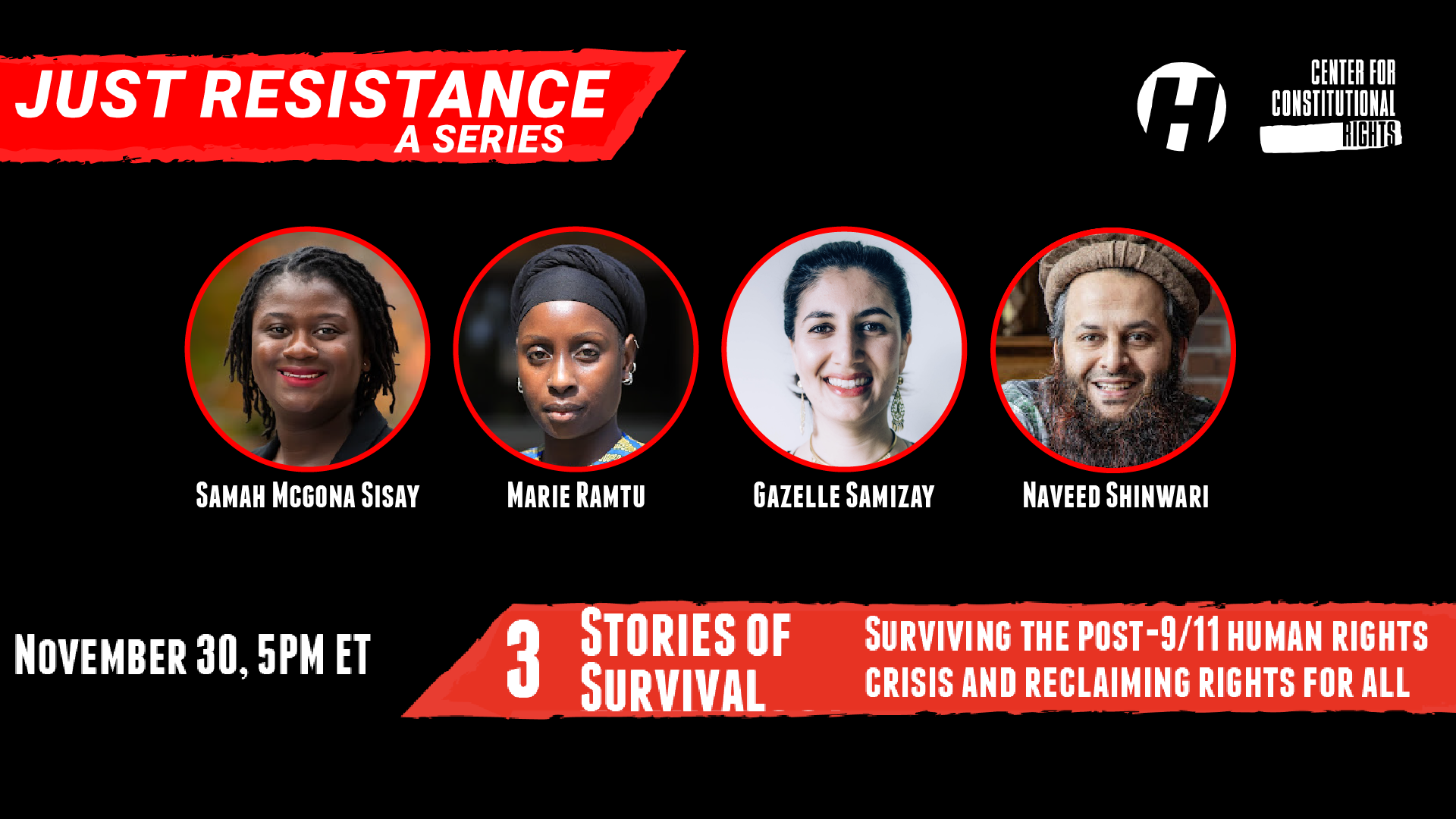 Join us on November 30th at 5:00 p.m. ET for the third event in a four part series by the Center for Constitutional Rights and Haymarket Books marking the 20th anniversary of 9/11. In “Stories of Survival: Surviving the post-9/11 human rights crisis and reclaiming rights for all,” we are honored to hear from survivors of the U.S. government’s so-called “War on Terror,” who have resisted the U.S. campaign of human rights abuses, from endless wars in Iraq and Afghanistan, to the global export of the nebulous and discriminatory “terrorism framework” and the proliferation of domestic policies of surveillance and detention that reinforced existing systems of oppression. From Kabul, and Mombasa to Omaha, panelists will share the impact of the harms and together demand accountability and imagine a world repaired.

Register through Eventbrite to receive a link to the video conference on the day of the event. This event will be recorded. ASL translation and live captioning will be provided.

Marie Ramtu holds a master’s degree in Peace Studies and International Relations from Hekima University College. She’s a lobbyist with grassroots, regional, and international niches. Her experience in humanitarian, the human rights and social justice sectors spans at least 14 years. Marie has operated to safeguard the rights of the marginalized refugees and asylum seekers. She has also had a specific focus in influencing a shift in attitude, policies, and practices in the specific protection on the rights of sexual and gender minorities. Before joining Muslims for Human Rights (MUHURI) as the Executive Director, Marie worked with regional and international non-governmental organizations that include the Coalition for the Independence of the African Commission (CIAC), the Network of African National Human Rights Institutions (NANHRI), and Church World Service.

Born in Kabul, Afghanistan and raised in rural Washington state, Gazelle Samizay’s work often reflects the complexities and contradictions of culture, nationality, and gender through the lens of her bicultural identity. Her work in photography, video, and mixed media has been exhibited across the U.S. and internationally, including at Whitechapel Gallery, London; Los Angeles Municipal Art Gallery; the California Museum of Photography, Riverside; the de Young Museum, San Francisco; and the Slamdance Film Festival, Park City, UT. Her pieces are part of the permanent collections of the Los Angeles County Museum of Art; the Center for Photography at Woodstock, NY; and En Foco, NY. In addition to her studio practice, her writing has been published in One Story, Thirty Stories: An Anthology of Contemporary Afghan American Literature, and she is a founding member of the Afghan American Artists and Writers Association. Samizay has received numerous awards and residencies, including from the Princess Grace Foundation, NY; Craft Contemporary, Los Angeles; the Arizona Community Foundation, Phoenix; Level Ground, Los Angeles, the Torrance Art Museum, and Side Street Projects, Los Angeles. She received her MFA in photography at the University of Arizona and currently lives in San Francisco. www.gazellesamizay.com. @gsamizay.

Naveed Shinwari is a plaintiff in Tanvir v. Tanzin, a case brought in 2013 on behalf of American Muslims who were placed or kept on the No-Fly List by the FBI for refusing to spy on their Muslim communities. He was repeatedly questioned and harassed by the FBI as they attempted to recruit him to spy on others. As retaliation for his refusal to do so, Naveed was placed on the No-Fly List and unable to travel to Afghanistan to visit his wife and daughters for two years. His fight to hold government officials accountable for their abuse of power continues.

Samah Mcgona Sisay is a Bertha Justice Fellow at the Center for Constitutional Rights, where she specializes in international human rights and challenging inhumane immigration policies and abusive police practices. Prior to coming to the Center for Constitutional Rights, Samah worked as an Equal Justice Works Fellow at African Services Committee. During her two-year fellowship, Samah provided legal representation on immigration matters to undocumented Black immigrant women, both transgender and cisgender, impacted by gender violence. Samah was born in Liberia and immigrated to the United States with her family at a young age during the country’s civil war. This experience informs her work as an attorney and propelled her to become the first person in her family to attend and graduate college. Samah earned a B.A. in International Affairs at the George Washington University and is a 2018 graduate of New York University School of Law, where she was an Arthur Garfield Hays Civil Liberties Fellow. During law school, Samah served as a student advocate for two years in the Immigrant Rights Clinic representing individuals in deportation proceedings. Samah was also awarded an International Law and Human Rights (ILHR) fellowship to work for Defence for Children International in Freetown, Sierra Leone, where she monitored the juvenile court and detention centers and advocated for the release of juvenile survivors of sexual violence.

To mark the 20th anniversary of 9/11, the Center for Constitutional Rights, Haymarket Books, and our partners are pleased to present a 4-part series, "Just Resistance: 20 years of global struggle against the post-9/11 human rights crisis." The series is an opportunity to bring together our colleagues and comrades from impacted communities across the world, to center stories of survival, and to contextualize the last two decades of U.S. policy within a history of imperialism, domination, and impunity. Over the course of the series, we will also invite audiences to imagine the next twenty years of demilitarization and decolonization.