The closure of Gaza is persecution

“Israel’s closure of the Gaza Strip has been disproportionate, discriminatory and not justified by military purposes: in fact, the current restrictions on movement of goods and persons into and out of the Gaza Strip are not imposed for security reasons or military necessity; they constitute punitive and persecutory measures.”  – Palestinian human rights organizations to the ICC

As the submission states:

“The Gaza Strip, a constituent part of the State of Palestine, is frequently described as the world’s largest open-air prison. This is not exaggeration: for the last nine years, approximately two million Palestinians have been effectively locked inside the tiny coastal territory, denied access to the remainder of the occupied Palestinian territory – and the outside world.” 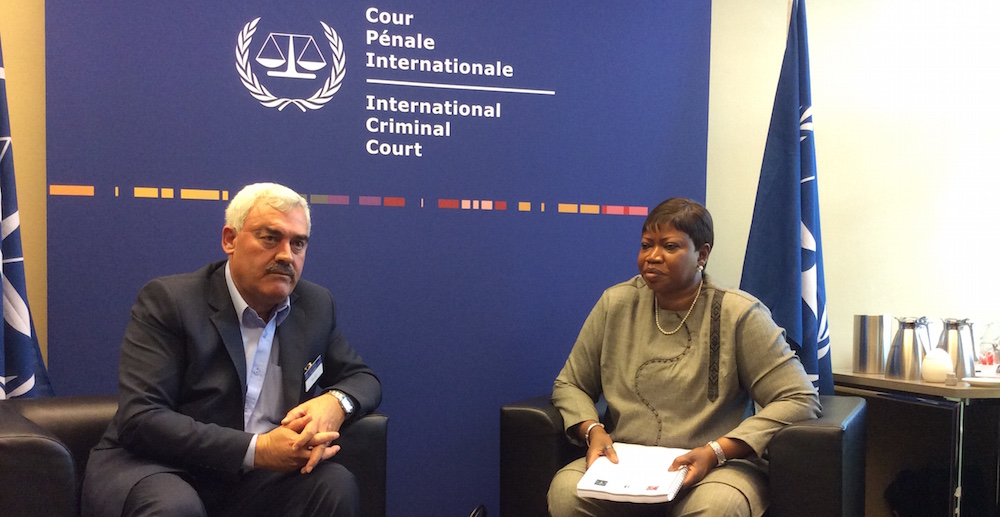 “The ICC prosecutor has a golden opportunity to bring an end to the suffering of the entire Palestinian population,” said Shawan Jabarin, Director of Al-Haq, pictured with ICC Prosecutor Fatou Bensouda.

Indeed, since 2007, Israel’s illegal closure of the Gaza Strip has prevented freedom of movement for people and goods, with devastating consequences for the Palestinians who live there. The closure has destroyed the economy, separated families, limited employment and educational opportunities, prevented Palestinians in Gaza from accessing medical care, and decimated public infrastructure.

Adding to the severe hardship of the closure are the three Israeli military offensives against Gaza since 2008, including so-called “Protective Edge” in 2014, which left more than 2,200 Palestinians dead, including 551 children.

This is not only a human-created humanitarian crisis; it amounts to a crime against humanity under international law, namely persecution. Persecution is defined as the intentional and severe denial of fundamental rights on discriminatory grounds.

The submission sets out a range of fundamental rights that Palestinians are being denied because they are Palestinian, including: the right to work; to health; to obtain an education; to freedom of movement’ to life and physical security; to adequate food, water, and housing; to family life; to self-determination; and ultimately, the right to dignity. The groups also asked the prosecutor to investigate the crime of other inhumane acts, stemming from the collective punishment of the civilian population as a whole.

The ICC is effectively the only court that can investigate and prosecute the architects of the Israeli closure policy. Having granted the ICC jurisdiction over war crimes, crimes against humanity and genocide committed in Palestine (or by Palestinians), there is an opportunity to end the era of Israeli impunity. CCR joins the Palestinian human rights organizations in urging the ICC prosecutor to act promptly to investigate this ongoing crime, and ultimately, for Israel to lift the siege on Gaza.