The United Nations Human Rights Council is underway in Geneva, with diplomats and experts covering such important topics as the rights of indigenous peoples, enforced disappearance, and the critical human rights situations in Burundi, Ukraine, and Yemen. Too often, though, the voices of those most directly impacted by the policies of the powerful – whether States, corporations, or other non-State actors – are not part of the discussion.

This session, though, the voices and accounts of two survivors of torture at Abu Ghraib echoed through the Palais des Nations, as the faces of some of the Iraqi detainees graced the walls. The two survivors, Salah Hassan and Ali Shallal Abbas, traveled to Geneva at the invitation of the UN Working Group on Mercenaries to share their accounts both of the cruel treatment they suffered at the U.S.-run detention center and their efforts for justice and accountability. 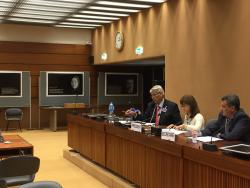 They also spoke at the opening of a multi-media exhibition curated by the Working Group that sought to show the human face of contractor abuses; photos of Abu Ghraib torture survivors  (and CCR clients) featured in photographer Chris Bartlett’s “Detainee Project” were prominently featured at the UN.

Both Salah and Ali have both brought cases against private contracting companies that provided interpreters and interrogators implicated in their torture. I have had the privilege to represent them and other victims as part of the legal team and joined them in Geneva to discuss their litigation efforts in the U.S. Unfortunately, Ali’s case, Saleh v. Titan, ended in 2011, when the Obama administration urged the Supreme Court to decline review of a 2-1 dismissal by the D.C. Court of Appeals – Judge Merrick Garland wrote a forceful, lengthy dissent. We are awaiting a decision by the Fourth Circuit Court of Appeals to determine whether Salah’s case, Al Shimari v. CACI, can proceed; this is the third time the case has gone to the appeals court in eight years. 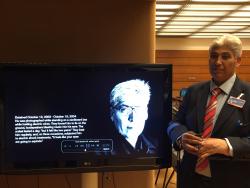 Salah and Ali said that their participation in the UN events is a continuation of their accountability efforts. First and foremost, both men wanted their stories – and by extension, the stories of the hundreds, the thousands of other detainees – to be heard and the weight of their words felt by audiences who might be able further the cause of justice for Abu Ghraib survivors and to do something to ensure that such abuses are not committed with impunity again. Twelve years on from the release of the notorious Abu Ghraib photos, their suffering is too often forgotten or simply unknown to younger generations.

“To me, it was no surprise that the American CBS network uncovered the scandal of Abu Ghraib prison in late April 2004. It was about five months after my release from that prison. They are ugly and humiliating images roaming my head before being aired on the media. To me they were moving images and voices that I could hear. Yet, my testimony was biased and was not sufficient for uncovering the scandal.”- Salah Hassan

They also hope that by sharing their accounts, they will contribute to ongoing efforts to clarify and codify the legal obligations of corporations, including private government contractors, for human rights abuses.  Their message is clear: no one, and no entity, should be beyond the reach of the law.  Let their voices be heard. 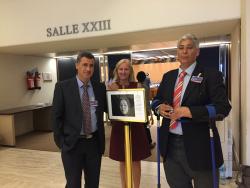 Below are excerpts of the remarks Salah Hassan delivered at the United Nations. Hassan, a journalist, was covering a bomb explosion in Baghdad for Al Jazeera at the time of his arrest. Like Ali, he was released without any charges being brought against him:

In short, entering the Abu Ghraib prison was an unprecedented shock. I would never forget the first minute I entered the prison. How would I, when it is a turning point in my life. I vividly remember when the prison guard pushed me, saying, take off your clothes. Before rejecting his order, he added, you have no option but to execute my orders.

Today I stand before you and the memories of the Abu Ghraib detention center are imprinted in my imagination as a movie played every time I see images of a prison, or a torture, or if I hear of violations of human rights anywhere in the world.

When I entered the Abu Ghraib prison, my only fault was being a journalist looking for truth and defending human rights. In prison, I heard the guards singing, happy birthday Al Jazeera on my first night at Abu Ghraib prison.

During two months, torture took different forms, including undressing, being caged like animals, using dogs for intimidation, banning food and drinks, hand and foot cuffing, physical humiliation, sexual implications and many others. […] My body was like a machine, responding to all external orders. The only part I owned was my brain, which could not stopped by the black plastic bag they used to cover my head. The most important question to which I could find no answer at the time is: what is all this for? […]

Being forced into stripping off my clothes was strange, ugly, oppressive, and shocking. Moreover, the pleasure from the torture to which I was exposed was horrifying. I asked myself several times, could the American army do something like this? Which army, especially this one known as a great army, would do this? Later I knew the answer; the army detached itself, and the alternative was the actor. The alternative that was ready to do such dirty work is the security companies.

The security companies at Abu Ghraib prison were hiding behind [the] absence of a law that can hold them accountable for their acts. Today, and after the passage of more than 13 years since the scandal of Abu Ghraib prison, these companies are yet to be penalized and are acting freely, while their victims are left without due justice.

I believe that the international community must take a serious position by exploring the possibilities of setting an international framework organizing the activities of private military and security companies. This is in addition to monitoring them and imposing oversight on their actions so that [this] catastrophe would not be repeated and human rights would not be violated anywhere.