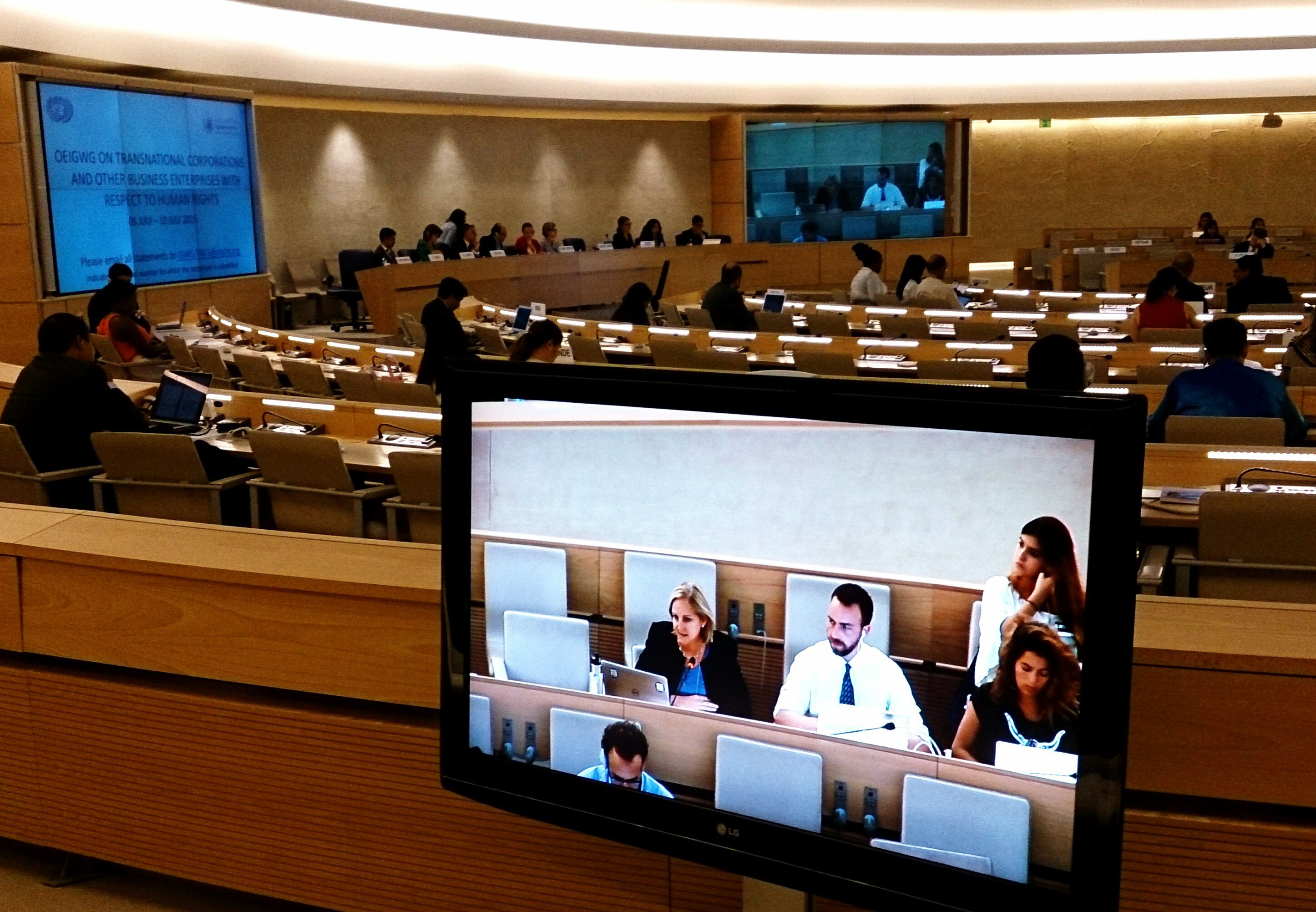 I’ve just returned from the inaugural session of a United Nations inter-governmental working group in Geneva tasked with drafting a treaty to address the accountability gap for human rights abuses involving corporations. The U.N. Human Rights Council established this group last year with an eye to the impunity enjoyed by too many U.S. and European corporations, especially those operating in the Global South. In my capacity as both a staff attorney at the CCR and a board member of the International Federation for Human Rights (FIDH), I shared some of our clients’ stories with the working group and made recommendations, including how a future treaty should address particular challenges for accountability in the context of human rights abuses committed by private military/security contractors (PMSCs). We believe this unique context can provide useful insights to strengthen an international legal framework governing corporate actors.

For decades, FIDH and its member organizations, including CCR, have documented case after case underscoring the need for a robust international treaty to address corporate human rights abuses. Ranging from abuses in conflict situations to supply chain issues, violations have included extra-judicial killings, arbitrary detentions, torture, child labor, environmental pollution, deprivation of means of subsistence, and the repression of social protests. In many cases, human rights defenders documenting and denouncing these abuses have been under threats of harassment and assassination, and their activities have been criminalized. Victims of these human rights violations are too often left without a remedy.

CCR has worked for the last two decades to hold corporations liable for serious human rights violations under the Alien Tort Statute in the U.S. and to ensure our federal courts remain open to victims. National courts and legislatures have primary responsibility for regulating corporate behavior and providing a forum for remedy – a responsibility made all the more pressing in the absence of an international venue to seek justice in these cases. We have had some measure of success, with settlements reached in the case of Unocal’s complicity in the  rape, murder, and forced labor of Burmese villagers connected to the company’s laying of a gas pipeline; in the case of Iraqi victims of Blackwater’s Nisoor Square; in the case against Royal Dutch/Shell for complicity in the murder of Nigerian activists and other serious violations against activists fighting for human rights and environmental justice in the Ogoni area of the Niger Delta; and in the case of 71 Iraqis tortured and otherwise seriously mistreated at Abu Ghraib with the participation of private military contractor L-3’s employees.

But in recent years, U.S. courts have increasingly let corporations off the hook for the serious harms they have committed or facilitated.  Some courts have accepted arguments by multi-national corporations that, while they have rights, they have no responsibilities when it comes to respecting and protecting human rights – that corporations can’t be held liable for human rights violations.  And in 2013 in the case of Kiobel v. Royal Dutch Petroleum, the U.S. Supreme Court raised the bar for holding corporations – including U.S. corporations – accountable for their role in even the most serious violations when they occur beyond U.S. borders. (CCR filed multiple amicus briefs with the Supreme Court in Kiobel).

Despite the challenges, CCR has continued to insist that victims must have the right of redress against for-profit corporations, most notably in Al Shimari v CACI, brought on behalf of four Iraqi alleged torture victims at the “hard site” of Abu Ghraib. I brought their case – and the larger issues related to accountability for private military contractors and corporations operating transnationally – to the attention of the working group as it illustrates some of the gaps an international treaty can address. As I explained in my statement to the working group:

For more than a decade, the Center for Constitutional Rights … has represented Iraqis bringing claims of war crimes and torture in litigation against private military/security contractors (PMSCs), including Blackwater, CACI and Titan/L-3, in US courts. Although two cases have resulted in financial settlements, this litigation has not been easy. One case, Al Shimari v CACI… has just entered the eighth year of litigation. The plaintiffs' claims have been found to satisfy the Kiobel “touch and concern” test, and satisfied the threshold questions of corporate liability and extra-territorial jurisdiction, but is now on appeal, again, following dismissal two weeks ago under the political question doctrine.

We urge the Working Group to clarify, and indeed, affirm the liability of PMSCs for their participation in human rights violations. That the corporations are hired by States  ̶  or the United Nations  ̶  must not serve as a shield to liability. Any immunities States  ̶  or the U.N. ̶  might enjoy must not be imputed to these for-profit actors and must not be permitted to serve as a barrier to victims of human rights violations right to a remedy, particularly in circumstances where the violations in question have been affirmed in treaty and customary law as unlawful, and thus cannot be considered as official State acts.

I hope the U.N. working group will clarify and, in a future treaty, codify the responsibilities of corporations operating transnationally, affirming that indeed, they, and domestically-operated corporations, can be held liable when they breach human rights. CCR and FIDH will continue partnering with individuals and communities bearing the brunt of corporate abuses to press the U.N. – and national courts – to ensure that they have a voice when future business ventures are proposed and access to a remedy in the case of breaches, whether in the home state of the corporation, the host state where the violation occurred, or in the absence of either, in a jurisdiction where the business operates. Together, we will work to bring the era of corporate impunity to an end.