This Sunday, June 26, is the UN International Day in Support of Victims of Torture. On this day, and every day, CCR recognizes the courage and resilience of our clients, allies, and movement partners with whom we continue to fight for justice.

It was on June 26, 1987 that the UN Convention against Torture and Other Cruel, Inhuman or Degrading Treatment or Punishment (CAT) entered into force. This international human rights treaty makes clear that there can never be a justification for torture—ever—and that it is the responsibility of every state to prevent it from happening, and punish it when it does. Yet it is a cruel reality that torture continues with impunity all over the globe, often at the hands of those at the highest levels of governments – including our own.

At the heart of the Convention is the recognition of the inherent human dignity of all individuals, which torture seeks to destroy. That, too, is the bedrock of our own work. Opposing torture has long been a signature issue for CCR. We’ve challenged laws, policies, and the cultures of power, secrecy, and fear that have allowed torture to take place and go unpunished. And in all of our efforts, we’ve sought to make space for and uplift the experiences of torture survivors.

CCR has fought against long odds, on behalf of and in partnership with some of the most marginalized and vulnerable communities against some of the world’s most powerful individuals. We sued Emmanuel “Toto” Constant, leader of a Haitian paramilitary death squad, for the brutal torture of three women in Haiti, Bosnian Serb war criminal Radovan Karadžić for multiple human rights abuses including sexual violence as a form of torture and a tool of genocide, and Argentine General Guillermo Suarez-Mason for abductions, disappearances, and torture during the military dictatorship in the 1980s. Much of this work follows in the path set by our 1980 landmark victory under the Alien Tort Statute in Filártiga v. Peña-Irala, in which the court declared torturers hostis humani generis – enemies of all humanity.

Our current anti-torture efforts span a range of issues. Here’s a snapshot:

Challenging the torture of solitary confinement in U.S. prisons

CCR client George Ruiz is 72 years old. For 30 years, he spent every day alone — locked in a cramped, windowless cell inside the Security Housing Unit (SHU), first at California’s Pelican Bay State Prison, then at Tehachapi prison. He was only allowed out for one hour a day to exercise in another concrete cell. Ruiz was not in the SHU for breaking any prison rules, but because prison officials claimed he was “affiliated” with a prison gang.

As the UN Special Rapporteur on Torture has made clear, prolonged solitary confinement is a form of torture, prohibited under international law. On September 1, 2015, in a landmark settlement in our lawsuit, Ashker v. Governor of California, CCR ended indeterminate solitary confinement in California, dramatically reducing the number of people in isolation, including Mr. Ruiz.

When CCR client Salah Hasan Al-Ejaili, an Al Jazeera journalist, was on assignment in Iraq in November 2003, he was arrested and imprisoned in the notorious U.S.-run Abu Ghraib “hard site” for approximately four months. "The worst was the first day I arrived in Abu Ghraib, how they forced me to strip … naked in front of everyone," Al-Ejaili recently recounted in a piece by Al Jazeera. "They placed a black hood on my head and left me hanging all night."

Al-Ejaili is a plaintiff in Al Shimari v. CACI, a federal lawsuit brought by CCR in 2008 on behalf of four Iraqi torture victims against U.S.-based government contractor CACI Premier Technology. The lawsuit asserts that CACI directed and participated in illegal conduct, including torture, at the Abu Ghraib prison in Iraq where it was hired by the U.S. to provide interrogation services. While Al-Ejaili was imprisoned, CACI and its co-conspirators stripped him and kept him naked, threatened him with dogs, deprived him of food, beat him, and kept him in a solitary cell in conditions of sensory deprivation. This case is part of CCR’s efforts to secure accountability for human rights abuses committed by military contractors, an issue of critical importance in light of the United States’ expanding reliance on military contractors. 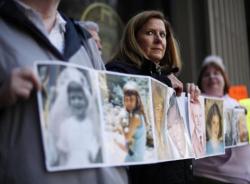 When she was in 8th grade, Barbara Blaine was abused by a Toledo, Ohio priest who taught in the Catholic school she attended. Years later, her pleas for help from Toledo’s bishop fell on deaf ears. In 1988, Barbara and a small group of survivors founded the Survivors Network of those Abused by Priests (SNAP). Today, the group has grown to more than 18,000 members in 79 countries, with support group meetings in 65 cities.

Ongoing revelations of pervasive and serious sexual violence against children and vulnerable adults by priests and others associated with the Catholic Church in different parts of the world have shown that the crisis is not one of isolated random sexual assaults but is widespread and systemic. In the wake of scandals around the world, experts and investigators have identified policies and practices of the Vatican and high-level officials of the Catholic Church that have covered up and enabled the sexual violence to continue. In response, CCR and SNAP have worked together to hold the Vatican accountable in various efforts in international fora, including at the International Criminal Court and the United Nations. Due in large part to the success of our campaign, in 2014, the UN Committee Against Torture called the widespread and systematic sexual violence within the Catholic Church what it is: torture. The Vatican has yet to comply with the UN recommendations and adequately address the ongoing global crisis, and so CCR and SNAP’s efforts continue to demand that it does. 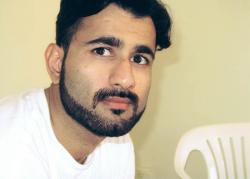 In March 2003, CCR client Majid Khan, a citizen of Pakistan with political asylum status in the United States, was captured, forcibly disappeared, and tortured by U.S. officials at overseas “black sites” operated by the CIA. Majid Khan was sent to Guantánamo Bay in September 2006, at the age of 26.  CCR has represented Majid Khan since 2006, first in his habeas case in federal court and now before military commissions. CCR had to fight for more than a year just to meet with Khan, as the government objected because of the “unique circumstances” of his case, which CCR argued was an attempt to conceal illegal conduct and acts that would embarrass the United States.

Many harrowing details of Khan’s treatment have since been made public. His torture is described at length in the Senate Select Committee on Intelligence report on the CIA’s post-9/11 detention and interrogation program, key findings of which were released on December 9, 2014. In the last year, further details of the CIA’s cruel treatment and torture of Khan continue to surface. In June 2015, unclassified information was made public for the first time by Reuters, and just last week, the CIA declassified and released the transcript of Khan’s own testimony from his 2007 Combatant Status Review Tribunal (CSRT) hearing.

Despite the United States’ obligation under international law (like the Convention Against Torture) to investigate and prosecute those responsible for torture, there has yet to be any steps taken towards accountability by the Obama administration since the Senate Torture Report was released. This is why CCR continues challenging the US torture program in other countries under the principles of universal jurisdiction