Tea and the power of conversation

Beauty does not typically come to mind when you think of Guantánamo, but it’s a central theme in artists Aaron Hughes and Amber Ginsburg’s Tea Project, a collection of narratives that surface moments of absurdity and tenderness in the rubble of war and detention. Last week, CCR Legal Director Baher Azmy and I travelled to Chicago to participate in a series of Tea Project events, presented by Links Hall.

In addition to Aaron and Amber, we shared the stage with an incredible group of people presenting a wide range of perspectives: Ben Thompson, a former Abu Ghraib prison guard; Larry Siems, writer and editor of Guantánamo Diary; allies at the Council on American-Islamic Relations (CAIR); poets from the Chicago Poetry Center; our friends at Witness Against Torture; James Yee, former Muslim chaplain at Guantánamo; and formidable teens from the Inner-City Muslim Action Center (IMAN)’s youth group. It was a unique and impressive convergence of artists, activists, lawyers, and writers, all of whom shared personal stories intended to disrupt the numbing effects of never-ending war and build connections between different systems of oppression. Here at CCR, we have always had a deep appreciation for and reliance on the transformative power of art and culture to fuel social justice movements by opening hearts and minds to new possibilities. 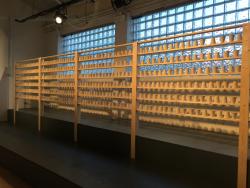 779 porcelain cups, one for every man held at Guantánamo since 2002

Serving as a backdrop for the Tea Project events were 779 porcelain cups made by Aaron and Amber: one for every man held at Guantánamo since 2002. On the bottoms are the names of each individual and his country of citizenship, and carved into the cups are the national or native flowers of that country. The Tea Project draws inspiration from a story of former Guantánamo guard Chris Arendt, who was stationed at Guantánamo from 2004-2005. There he was enamored with the beautiful flowers and designs that detainees etched on to the Styrofoam cups they were given during mealtime. It was that beauty—and the human spirit it represented—that resonated with Chris, who eventually became an outspoken critic of the treatment of detainees in the prison. “The war on terror has resulted in so many ridiculous, ugly actions and unacceptable breaches of ethics,” Chris once said. “Those who can think and express themselves artistically have a duty to do so while we have the chance. Art may not be able to end the war, but it can bring people together.” 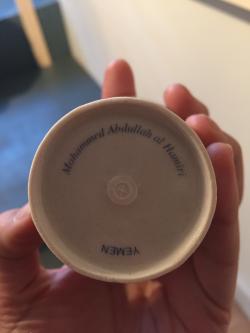 A tea cup for Mohammed Al-Hamiri

The Tea Project is described as “an ongoing dialogue that traverses a variety of landscapes. From the tea sipped at a family gathering, to a cage in Guantánamo Bay, to a motor pool in Iraq; tea is not only a favored drink but a shared moment that transcends cultural divides and systems of oppression.” The 779 cups are not only a visual, an exhibit unto themselves, but also an opportunity: guests are invited to take one of the cups for tea and begin a conversation.

While we were in Chicago, Baher, Amber, Aaron, and I also discussed the Tea Project with Radio Islam.

Baher and I brought to the conversation stories of our clients’ unjust detentions at Guantánamo, and, for some, their stories of life after. After spending years visiting CCR clients in Guantánamo, I continue to be amazed by the glimmers of beauty that manage to exist in such a dark, inhumane place. Ghaleb’s Al Bihani’s rich pastel drawings, Mohammed Al-Hamiri’s haunting prose, and Tariq Ba Odah’s peaceful protest through his hunger strike have important lessons to teach us all: despite over fourteen years of detention within a system bent on trying to break them, and strip them of their humanity, they persevere. Guantánamo was created to isolate and dehumanize the men who were trapped inside. It is powerful to be able to share their stories, through which they become sons, brothers, and fathers with dreams and hopes for a more just world, which are inextricably bound up with those of the individuals sitting in the audience. Our clients may not have been physically present in that room, but they were there. And it was beautiful.