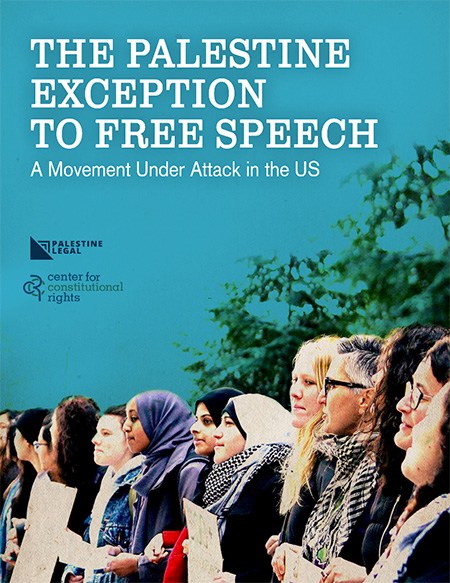 This report, released by the Center for Constitutional Rights and Palestine Legal in September 2015, documents for the first time the widespread and growing suppression of Palestinian human rights advocacy in the United States. Between January 2014 and June 2015, Palestine Legal responded to nearly 300 incidents of suppression; 85% of those incidents targeted students and professors, on a total of more than 65 US college campuses. This trend has significant implications for both the First Amendment and democratic principles like academic freedom, not to mention the mission of higher education to help develop critical thinking. The report outlines the tactics – including event cancellations, baseless legal complaints, administrative disciplinary actions, firings, and false and inflammatory accusations of terrorism and antisemitism – that Israel advocacy organizations, universities, government actors, and other institutions have used against activists. It also contains testimony from advocates who have been targeted for their speech or expression, and includes an appendix documenting more than 50 campus-related case studies.

Students and scholars discuss the backlash, censorship, and punishment they have experienced for engaging in Palestine advocacy.

Palestine Legal - The Palestine Exception to Free Speech: A Movement Under Attack in the US

Jewish Voice for Peace - Stifling Dissent: How Israel's Defenders Use False Charges of Anti-Semitism to Limit the Debate Over Israel on Campus

A lawsuit against the University of Illinois at Urbana-Champaign for firing Professor Steven Salaita from a tenured position over his tweets critical of Israel’s summer 2014 attack on Gaza.

Representing current and former Olympia Food Co-op board members who are being sued over their decision to boycott Israeli goods.

July 2, 2015
By Ella Baker Summer Interns Ruhan Nagra and Thomas Power The opinions of internationally recognized torture experts will be considered in the Sixth Circuit appeal of 67-year-old Palestinian American...

The Center for Constitutional Rights (CCR) and Palestine Solidarity Legal Support (PSLS) are pleased to announce the publication of a Know Your Rights booklet for Palestinian rights activists, Legal...

May 14, 2013
May 14, 2013, New York -- Today, the Center for Constitutional Rights and seven other rights groups sent letters to the Department of Education (DOE) raising concerns about the use of Title VI of the...

Letter: CCR and Partners Inform Over 140 Universities That There is No Civility Exception to the First Amendment

CCR and its partners – including Palestine Solidarity Legal Support, the National Lawyers Guild, Advancing Justice – Asian Law Caucus, and others – submitted a letter to over 140...

The Center for Constitutional Rights (CCR), the National Lawyers Guild (NLG) and the Council on American-Islamic Relations-USA (CAIR-USA) sent members of the House of Representatives Committee on...

January 21, 2014: The Center for Constitutional Rights (CCR) and Palestine Solidarity Legal Support (PSLS) today responded on behalf of the American Studies Association (ASA) to a “cease and...

FAQ: What to Know About the New York State Human Rights Law’s “Boycott” Provision New York human rights activists are increasingly advocating for boycotts to pressure Israel to comply with...

Today, the Center for Constitutional Rights, the South Florida Chapter of the National Lawyers Guild, and the American-Arab Anti-Discrimination Committee (ADC) wrote to administrators at Florida...

US and Compliance with the ICCPR

CCR has a strong practice of engaging with international human rights bodies to bring attention to our issues and uplift the experiences of those most impacted by the U.S. government’s failures to...
Read More