The purpose of the FOIA request and lawsuit is to obtain information for the public about federal agencies' policies of imposing fines and monetary penalties on individuals, specifically immigrants...

A FOIA lawsuit seeking records of any NSA surveillance gathered on 23 attorneys who represented men detained at Guantánamo.

The Trump administration has been dedicated to closing all avenues for immigration, from blocking asylum-seekers at the border to ending protections for Dreamers to constricting the availability of...

This case involves a corporate trade group's challenge to 40 years of precedent limiting the government's ability to withhold information requested under the Freedom of Information Act (FOIA). On...

Color of Change v. Department of Homeland Security and Federal Bureau of Investigation

In July 2016, Color of Change (COC) and CCR filed a Freedom of Information Act (FOIA) Request seeking information from the U.S. Department of Homeland Security (DHS) and the Federal Bureau of...

Freedom of Information Request with DHS and ICE seeking information related to ICE’s home raids policies and arrest data in general as well as the particulars of a December 2011 ICE warrantless home...

A lawsuit that charges the Department of Defense and other government agencies with illegally withholding records concerning the abuse of detainees in U.S. military custody.

Freedom of Information Act Requests to various U.S. government agencies regarding the 2009 military coup in Honduras.

A FOIA request for documents relating to the NSEERS registration program.

Rahim v FBI is a federal Freedom of Information Act (FOIA) lawsuit against the U.S. Department of Justice and the Federal Bureau of Investigation filed in the District Court for the Eastern District...

The Freedom of Information Act (FOIA) is a federal statute that enables anyone in the United States to request records from federal agencies such as the Federal Bureau of Investigation or the Department of State. The act was signed into law by President Lyndon Johnson in 1966, the same year as the founding of the Center for Constitutional Rights. States also have their own open records laws, many of them enacted after the passage of FOIA.

FOIA and other public records requests have long been critical tools at the core of the Center for Constitutional Rights’ social justice work in support of communities and movement partners. Our unique approach to FOIA is not just about transparency. We center our allies’ vision for accountability and social change in our legal and advocacy work. 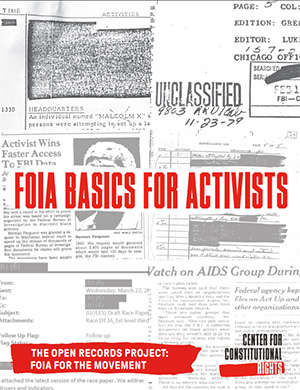 FOIA has been essential in defending activists facing government surveillance and repression, uncovering gross human rights violations, and arming movements with the information they need to fight powerful interests. Through FOIA requests, litigation, and advocacy, we expose the actions of both government and private actors who have gone to unprecedented lengths to bury information about official conduct and wrongdoing.

Through the Center for Constitutional Rights’ new Open Records Project: FOIA for the Movement, we bring our history and expertise to bear, with FOIA trainings and resources that will assist movement partners and the legal community to use FOIA more effectively in their work to challenge oppressive systems of power.

...The Center for Constitutional Rights has just launched the Open Records Project: FOIA for the Movement . The project is coordinated by Ian Head, senior legal worker at CCR, co-editor of the Jailhouse Lawyers Handbook and a former executive vice president of the National Lawyers Guild. He joins...

...Government actors have, it seems, endless reasons to shroud their actions in secrecy; that’s why tools like the Freedom of Information Act and state open records laws are so critical. But it turns out it isn’t journalists who are making the most of FOIA, for instance, but other people—and...

Versión en Español a continuación Groups File Lawsuit to Hold ICE and DOJ Accountable, Seek Documents and Transparency Regarding Targeting of Sanctuary Seekers and Activists With Excessive, Retaliatory Fines February 26, 2020, New York, NY – Amid a week of action lead by a collective of immigrants...

The DHS Office of Intelligence and Analysis (“I&A”) produced several emails sent in early 2017 between their personnel concerning a document they referred to as the “Race Paper.” Each email attached a separate version of the document, and some emails contain some feedback from DHS personnel on...

ICE, like any other law enforcement agency, must have a judicial warrant in order to enter a home without consent. But they rarely do. In the absence of a judicial warrant authorizing entry, ICE agents have taken to gaining access to residences through deception, or a "ruse," a tactic that many...