Rights or Rightlessness? The Lives of Men Imprisoned at Guantánamo 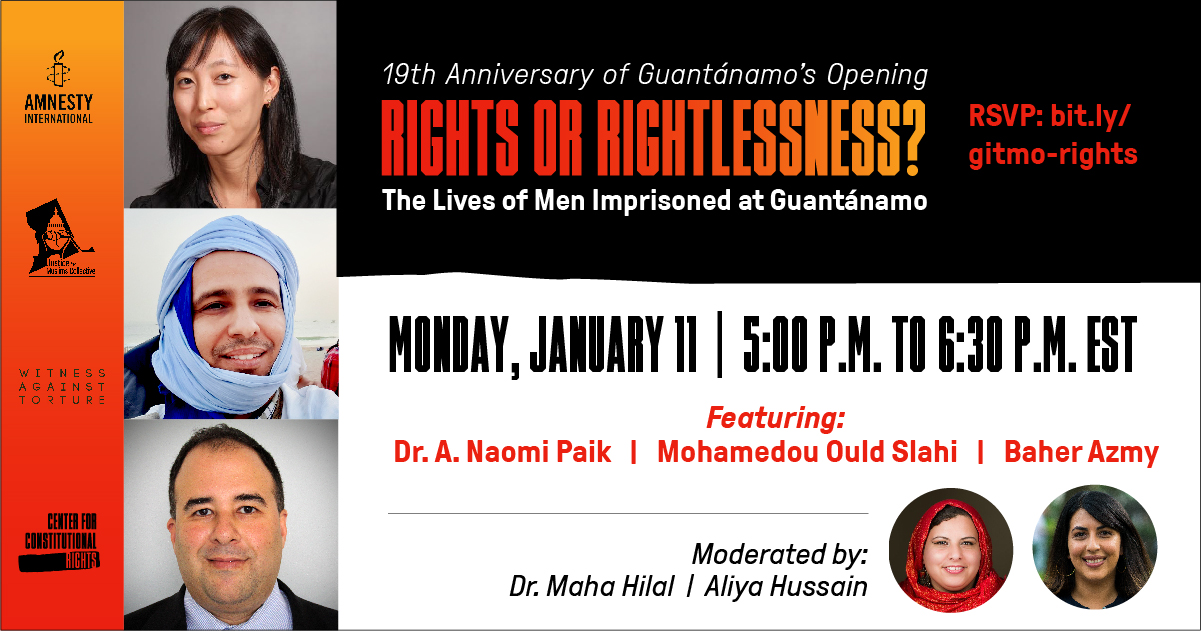 Join the Center for Constitutional Rights, Justice for Muslims Collective, Witness Against Torture, and Amnesty International USA for a virtual conversation on the 19th anniversary of the opening of the Guantánamo Bay prison.

On January 11, 2002, the first “War on Terror” suspects landed in a plane at Guantánamo Bay, Cuba, for detention in a military prison designed to be outside the law and beyond public scrutiny. Immediately, a movement of lawyers and advocates fought hard to assert the rights of the hundreds of Muslim men and boys, and in 2008 the Supreme Court upheld their right to challenge their detention. Throughout the last two decades, hundreds of men have been released, but without any vindication or measure of justice. Forty men currently remain imprisoned, and their rights continue to be contested in and out of the courtroom.

Dr. A. Naomi Paik outlines the concept of “rightlessness,” a framework that helps explain the power the U.S. government wielded to torture, render, and detain hundreds of citizens of other countries to an offshore camp, as well as the resistance—and insistence—of the Muslim men detained there and their effort to create community within and outside the prison walls.

Guantánamo, extreme as it is, can and must be situated in a broader history of U.S. detention camps and harms of the carceral state. What lessons can we learn from Japanese-American camps during WWII, the detention of Haitian refugees at Guantánamo in the 1990s, and the last two decades of the military prison itself, to work towards the closure of the prison?

ASL Translation and live transcription will be provided for this event.