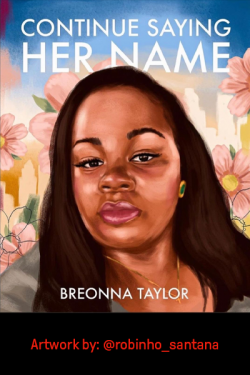 March 13 marked the one-year commemoration of the killing of Breonna Taylor, a 26-year-old Black woman who, at the height of what we now know is the worst pandemic of our lifetime, was working as an emergency medical technician —an essential worker.  Forgive me if I do not classify this first year since her killing as an anniversary. I am from the school of thought that anniversaries should be reserved for more pleasant memories, relationship celebrations, weddings, retirement after a long career—but not the cold-blooded murder by police officers of a Black woman asleep in her own home, in her own bed.

Most of us are familiar with the details: Breonna Taylor and her boyfriend, Kenneth Walker, were asleep when the Louisville Metro Police, under a no-knock search warrant, conducted a botched police raid and fired a barrage of bullets into the home.  When it was over, Breonna lay dead. Trumped-up charges brought against Kenny, who fired a single shot to protect his home and allegedly struck one of the police officers, were permanently dismissed last week.

One year later, we are still waiting on justice for Breonna. The firing of three of the police officers, two who stormed her home and one who was responsible for the faulty search warrant, resulted in charges against only one of the officers—not for killing Breonna, but for endangering the safety of her neighbors. It is no wonder that protests erupted throughout the country then and now. There has been no justice for Breonna.

Over the last year, these protests have called for criminal justice reform. Make no mistake—criminal justice reform is needed and is extremely important. Yet, during this Women’s History Month, let’s also demand that Black women and Black trans women are protected and treated with humanity and dignity throughout this country. All women, regardless of race, need to imagine Breonna as their daughter, their sister, their niece, their mother. Say her name and remember her as a human being  and one of us.  Only then can we understand real justice and support true reform. When hundreds, if not thousands, of killings of Black women and Black trans women are ignored and go unresolved and unchallenged, there can be no justice, and certainly “no peace.”

During this first year commemorating Breonna’s killing, let us remember that Breonna was a Black woman, a Black woman with a loving family who did not deserve to die. She deserved to live a long, vibrant life of her choosing, and she deserved to wake up. During this Women’s History Month, let us commit to being our sisters’ keepers, recognizing each other’s humanity by calling for and supporting justice for Breonna Taylor.  #SayHerName.