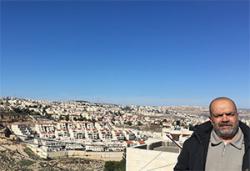 The booking platform Airbnb recently decided to remove listings for Israeli settlements in the West Bank in the occupied Palestinian territory. Dual Israeli-U.S. citizen settlers whose listings are to be removed and potential renters sued Airbnb, claiming discrimination under the Fair Housing Act. But the listings that would be removed under the new policy are on land stolen by settlers from Palestinians, and in Israeli settlements from which Palestinians are barred—through their lawsuit, these settlers have turned the Fair Housing law on its head. So last Monday, the Center for Constitutional Rights stepped in, representing a Palestinian-American and two Palestinian villages whose properties are the very properties that settlers have listed on Airbnb, and a user of Airbnb who cannot access  the properties because they are in Jewish-only settlements and she is a Palestinian-American resident of the West Bank. We've brought counterclaims against the settlers for war crimes, crimes against humanity, trespass, unjust enrichment, and their discriminatory postings. It is hardly the settlers who are being discriminated against, but the Palestinians who have had their land stolen, off of whose land the settlers have profited, and who are barred from accessing these properties. Read more about the case on our case page.

Frontlines of Justice readers know about our case on behalf of the Ramapough Lenape Nation against the township of Mahwah, NJ and the Ramapo Hunt & Polo Club. The case argues that the township and the Hunt & Polo Club have coordinated to harass the Ramapough by claiming that as few as two Ramapough praying on land that they own is a zoning violation, and by levying millions of dollars in fines over prayer, tepees, tents, a sweat lodge made of small branches, trash cans, and even bicycles placed on the land. The Ramapough have conducted prayer and community cultural assemblies on their land, which abuts the property of the Hunt & Polo Club, for many years. Through our lawsuit, we are making clear that the real reason for these supposed zoning violations is racial and religious discrimination and the Hunt & Polo Club's desire to increase property values. Now, the Department of Justice has stepped in to support our case. Last week, the DOJ filed a statement of interest supporting the Ramapough’s claims under the Religious Land Use and Institutionalized Person's Act. As Center for Constitutional Rights Legal Director Baher Azmy told press outlets, "We welcome the Justice Department's strong statement in support of the [Ramapough's] religious discrimination claims… Their attention is essential given the ongoing harassment of the Ramapough… The law clearly entitles the Ramapough to pray on their land without continued interference." 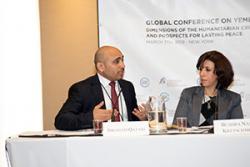 Earlier this month, the Tawakkol Karman Foundation and the Center on National Security at Fordham Law organized the Global Conference On Yemen: Dimensions Of The Humanitarian Crisis And Prospects Of Peace. The conference sought to raise awareness about the root causes of the civil war in Yemen, address the resulting humanitarian catastrophe, engage civil society and key stakeholders to help Yemen restore peace and democracy and to rebuild, and highlight the essential role of women in potential solutions to build a lasting peace. Center for Constitutional Rights Senior Legal Worker Ibraham Qatabi was the lead organizer of the conference. Among other cases and projects, Ibraham has worked on the Center for Constitutional Rights report with Yale Law School, "Window Dressing the Muslim Ban," which documents the impact of Donald Trump's Muslim Ban on Yemeni nationals applying for immigrant visas to the U.S. and which was cited by Justice Breyer in his dissent from the Supreme Court decision upholding the ban, as well as our lawsuit challenging the State Department's refusal to issue already-approved visas to the spouses and children of Yemeni-Americans. This month’s conference was the latest in Ibraham's tireless efforts to keep Yemen at the forefront of human rights efforts. Watch videos from the conference here, including talks by four Nobel Peace laureates, policy makers, experts, academics, journalists, and activists.