"Protect the Protest" coalition launched to fight back against SLAPPs

CCR is excited to be part of a new coalition launched yesterday, called Protect the Protest. PTP brings together civil liberties, human rights and environmental groups to push back against Strategic Lawsuits Against Public Participation, or SLAPPs. SLAPPs are civil litigation filed, usually by large corporations, against those who have spoken out on an issue of public concern. The goal of a SLAPP suit is not winning in court, and the legal claims in the case are often meritless. Instead, those who file SLAPP suits aim to scare or so heavily burden the defendants with litigation that they cease their advocacy and activism.

Over the last year, several SLAPP suits have been filed against environmental activists and organizations for their efforts opposing corporate destruction of the planet. Energy Transfer Partners, the company behind the Dakota Access Pipeline, and Resolute Forest Products, a Canadian logging company, have filed massive lawsuits, arguing that Greenpeace and other environmental organizations and activists have been operating, not campaigns, but unlawful racketeering enterprises. The lawsuits were filed under the RICO—or Racketeer Influenced and Corrupt Organizations—law, which was enacted to bring down the mafia, but has also long been used to target political organizing.

The allegations are sprawling and outlandish. According to ETP, these organizations have engaged in “outright lies” about the effect of pipelines on the environment and communities (i.e. fossil fuel extraction is driving climate change, and pipelines threaten clean water), all for the purpose of duping donors into giving money to their organizations. What’s more, ETP says:

“At the center of the illegal enterprise is Greenpeace, which worked in concert with radical eco-terrorist organizations—such as Earth First!—to fund, direct and incite acts of violence and terrorism… [T]hese events were organized, funded and produced by the Enterprise to create sensational media attention and drive donors to their website.”

These claims, of course, are preposterous. But again, winning a SLAPP suit is not the point. Burying the activist in litigation is. For example, CCR has long represented former members of the board of the Olympia Food Co-op, after they were sued in a SLAPP for their decision to boycott Israeli goods. The lawsuit has now been going on for seven years—merely for the decision to engage in a peaceful, First Amendment-protected boycott. A similar case against the American Studies Association for passing a Resolution endorsing a boycott of Israeli academic institutions is now in its third year, with new defendants recently added.  The never-ending attempts to recast or amend the initial allegations in the Resolute and ETP cases show that dragging things out serves the fundamental purpose of a SLAPP: to make your political opponents labor under a constant burden of defending against litigation.

The ETP case casts collective political activity as an unlawful conspiracy, but it also attempts to rewrite indigenous people out of the history of the DAPL protests.  In the words of CCR Senior Managing Attorney Shayana Kadidal, who spoke at yesterday’s rally: 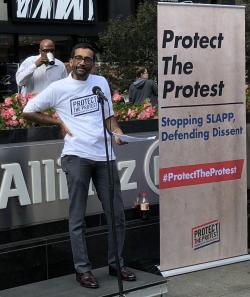 "In some ways [these lawsuits are] an entertaining window into the anxieties of the group of rich lawyers and executives behind this suit… But on top of being not even marginally plausible, the very premise of the lawsuit is offensive: their tall tale about a conspiracy of international nonprofits and faceless outside agitators is an attempt to take all the agency away from the indigenous activists who actually led the protests, brought them to international attention, and shook an Earth-destroying $26 billion dollar company to the bone."

We hope that the judge will sanction Kasowitz Benson Torres —the law firm that filed the case, which also just happens to be Donald Trump’s go-to law firm—enough so that they are deterred from filing SLAPPs in the future.

But we cannot rely solely on courts to deal with SLAPPs. That’s why Protect the Protest was formed. The coalition launched yesterday with events and actions in New York City, in front of Kasowitz’s office, San Francisco, and Dallas. PTP provides resources, including more information on what SLAPPs are and who is vulnerable to them, information on your constitutional rights and civil liberties, resources for defending against a SLAPP suit, and updates on pending SLAPPs. PTP also provides information on how to get involved in the effort to end SLAPP suits, including efforts to enact anti-SLAPP laws.

SLAPP suits are powerful squelchers of dissent. But we can be just as powerful pushing back. Visit Protect the Protest and join the effort today!

I say corporations are Destroying the Planet. So Sue Me?

The #NoDAPL movement was powerful, factual, and Indigenous-led. Lawsuit lies can’t change that.

CCR News: No one is above the law