Earlier this month, hundreds of people from across the country made a 118-mile trek from Charlottesville, Virginia to Washington, D.C. to confront white supremacy – and CCR Bertha Justice fellow Stephanie Llanes was among them. 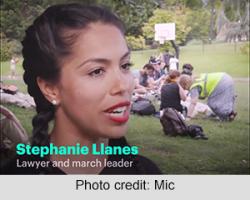 The march emerged in response to the violent white supremacist and neo-Nazi march last month in Charlottesville and the president’s failure to condemn it, but the broader goal was to bring people together “to reckon with America’s long history of white supremacy, so that we can begin to heal the wounds of our nation.”

As Stephanie commented to a Mic reporter along the march, “White supremacy within our government, as a tool to enact policies, has been reigning for many years. To start getting at dismantling white supremacy in this moment, it is absolutely necessary to take down Donald Trump and his administration.”

Check out Mic’s in-depth coverage of the march’s finale, including the short documentary they put out, both featuring Stephanie.

“We will have our day in court and the story of Abu Ghraib will be told by me and other men who lived – and – survived it.” –Salah Al-Ejaili, Plaintiff

This Friday marks an important hearing in the long-running effort accountability and redress for Iraqi torture survivors. Our case, Al Shimari v. CACI, was filed in 2008 on behalf of victims of torture and other war crimes at the “hard site” at Abu Ghraib against U.S.-based private contractor CACI Premier Technology, Inc. The lawsuit asserts that CACI directed and participated in a system of torture and other serious abuses at the Abu Ghraib prison in Iraq where it was providing interrogation services under contract with the U.S. government.

The case was filed under the Alien Tort Statute (ATS), which allows non-U.S. citizens to sue for human rights violations committed abroad that “touch and concern” the United States. In June 2017, the district court judge affirmed that war crimes, torture, and cruel, inhuman and degrading treatment are well-recognized and definable norms and thus fall within the court’s jurisdiction under the ATS, and ordered both parties to brief whether the record supports a finding that the plaintiffs suffered these violations. Shortly after, CACI moved to dismiss the case.

This will be the first hearing in the course of the case that CCR will present in detail the torture and serious mistreatment our clients suffered at Abu Ghraib, in support of our argument that the case should move forward. If you’re in the Alexandria, VA area, please join us Friday, September 22 at 10 am.

Applications now open for the 2018 Bertha Justice Fellowships at CCR!

In 2012, CCR launched the Bertha Justice Fellowship to deepen our work training the next generation of “people’s lawyers.” The fellowship is a two-year program for emerging lawyers (0-2 years out of law school) who are interested in gaining both practical experience working on CCR cases and a theoretical understanding of how legal advocacy can create social change. CCR will host four Bertha Fellows, starting in September 2018, who will work alongside lawyers in one of our three docket areas: (1) Guantánamo Global Justice Initiative; (2) Government Misconduct/Racial Justice; and (3) International Human Rights.

Applications are due by October 9, 2017. Check out the full announcement here and please spread the word with your networks! 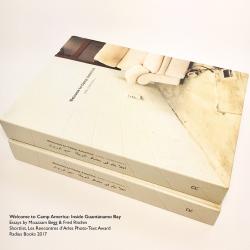 Renowned documentary artist and longtime CCR ally and collaborator Debi Cornwall has released a new multimedia book titled Welcome to Camp America: Inside Guantánamo Bay. As she told the New York Times, her goal in making the volume “was to invite people to look at Guantánamo again after almost 16 years. Most of us have stopped looking.”

Welcome to Camp America is described as “a vivid and disorienting glimpse into the U.S. Naval Station in Guantánamo Bay, Cuba, and its growing diaspora, through photographs, once-classified government documents, and first-person accounts. . .The book seeks common ground while asking provocative questions about compromises made between humanity and fear in the post-9/11 era.”