The State Department should advocate on behalf of U.S. citizens denied entry by Israel

On July 23, Lufthansa Airlines prevented five members of an interfaith delegation to Israel and Palestine from boarding their flight from Washington, D.C., to Tel Aviv, reportedly following instructions from the Israeli government. The delegation of peace activists planned to meet with interfaith organizations, grassroots activists, and human rights groups in Palestine and Israel. CCR condemns the Israeli government’s effort to silence these human rights defenders, which is consistent with a longstanding pattern of crackdowns on human rights defenders from Palestine, the U.S., and even the United Nations. This blatant disdain for freedom of expression is part and parcel of broader efforts to suppress Palestinian rights advocacy in the U.S. and Palestine/Israel. 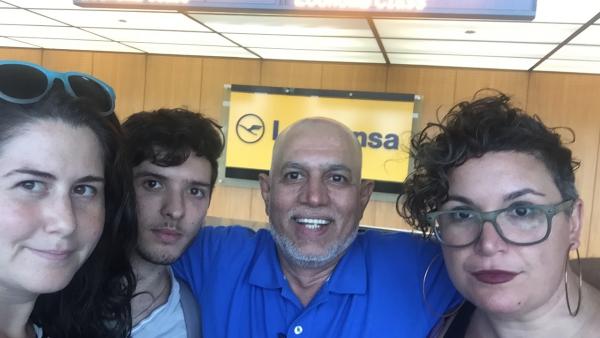 The five delegates are from Jewish Voice for Peace, American Muslims for Palestine, and the Presbyterian Peace Fellowship. It is suspected that they were not allowed to fly to Israel because of a law Israel passed in March that denies entry to someone who has (or works for an organization that has) called for a boycott against Israel, or who has committed to participate in such a boycott. Having long banned Palestinians from returning home and denied entry to people because they are, or are perceived to be, Arab or Muslim or because their political opinions conflict with official Israeli government policy, this is nevertheless apparently the first time Israel has prevented people from even boarding a plane to the country due to their political expression.

When asked about Israel’s law in March, a U.S. State Department spokesperson said, “[W]hile we oppose boycotts and sanctions of the state of Israel, we also support firmly freedom of expression.” While the State Department was asserting its commitment to freedom of expression, Congress introduced the Israel Anti-Boycott Act, which would impose severe penalties on constitutionally protected boycotts. Meanwhile, legislation in various states and localities threatens mobilization in support of Palestinian rights.

As Israel’s occupation of Palestine continues indefinitely, mobilization for Palestinian human rights is accelerating. The situation is especially dire as Gaza’s humanitarian crisis deepens, with recent electricity shortages highlighting the devastating impact of a decade-long closure that has prevented rebuilding in the aftermath of major military offensives, including “Operation Cast Lead” in 2008-2009 and the 51-day assault in 2014. Additionally, protesters have been injured and killed by Israeli forces in recent efforts to oppose the installation of security equipment—since removed—at Al-Aqsa Mosque in Jerusalem.

Efforts to promote human rights should be welcomed and encouraged, not impeded, particularly at this time of increasing disregard by the U.S. for human rights engagement. Indeed, as a signatory to human rights treaties including the International Covenant on Civil and Political Rights and the International Convention on the Elimination of All Forms of Racial Discrimination, the U.S. has an obligation not to contribute to discrimination or the denial of fundamental rights. CCR calls on the U.S. State Department to advocate on behalf of its own citizens who are working to defend Palestinian rights and to challenge Israel’s discriminatory actions.