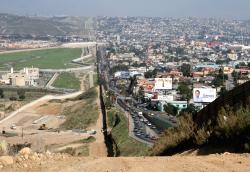 “I don’t know if you’ve heard yet, but the U.S. is no longer accepting asylum seekers from Mexico.” That’s one of the many egregious lies that our clients were told when they presented themselves at the U.S. border. As we reported earlier this month, CCR, together with Al Otro Lado, anonymous asylum seekers, and the American Immigration Council and Latham & Watkins as co-counsel, filed a class action lawsuit against U.S. Customs and Border Patrol (CBP) officials for their unlawful practice of turning away individuals seeking asylum at the U.S. southern border.

Staff attorney Angelo Guisado, who is one of the CCR attorneys working on this case and who traveled to Mexico to meet with our clients, wrote this about his experience: “What I saw was nothing short of strategic, cruel antipathy. This policy is a reflection of a larger reality: the noxious racist and anti-immigrant sentiments entrenched in the U.S. government.”

The case has also gotten the attention of Senator Dianne Feinstein of California. This past week, she requested policy clarification and data from Homeland Security Secretary John Kelly, demanding to know what guidance CBP officers had been given on asylum seekers. “These are not singular events,” Feinstein wrote in her letter. “They provide very concerning details suggesting that CBP officials are exceeding their authority and, if true, have the consequence of categorically denying important protections for vulnerable populations fleeing persecution.”

Also this past week, Bertha Justice fellow Stephanie Llanes met and discussed next steps in the case with our colleagues at the National Day Laborer Organizing Network. She also participated in the Black Alliance for Just Immigration’s Black border strategy meeting and delegation, which was held to develop a strategy to address the unique challenges facing Black immigrants and refugees living, detained, or as a result of U.S./Mexico border enforcement.

While it is gratifying that an elected official has cast a light on the humanitarian crisis at the southern border, there are unfortunately many more politicians and members of the Trump administration who are instead stoking anti-immigrant racism and tearing families apart. In the wake of the horrific deaths of 10 migrants in the back of a tractor trailer, Texas lieutenant governor Dan Patrick used the tragedy to endorse his proposed ban on sanctuary cities. The Justice Department introduced new conditions that would ban federal funds from being given via grants to sanctuary cities. Furthermore, ICE is more emboldened than ever, conducting coordinated raids across the country, and seemingly reveling in demonstrating contempt and inhumanity toward the immigrants they encounter.

CBP’s unlawful conduct can constitute a death sentence for asylum seekers, many of whom are being actively pursued during their dangerous journey to the border. For every person who we have been able to help with this lawsuit, and for every person Al Otro Lado provides assistance to, so many more are being denied this opportunity. And with those denials, a terrifying question of survival looms. We will continue to report on developments in this case and our work with Al Otro Lado and the incredibly brave individuals who are risking everything to escape violence and gain asylum in the U.S.

Where we’ll be in August

This month is shaping up to be a busy one for us. CCR senior staff attorney Rachel Meeropol and communications associate Lauren Gazzola will be at the Animal Rights National Conference in Washington, D.C., from August 3-6. Rachel will be speaking on the Know Your Rights 101 panel and at a morning plenary titled "Animal Rights in Age of Trump."  Lauren will deliver a keynote speech at the evening plenary, “A Call to Action.”

The Animal Rights National Conference is the U.S. animal rights movement's annual national conference. It is also the world's largest and longest-running animal rights gathering, hailing back to 1981. For more information and to register, visit www.arconference.org.

On Saturday, August 5, CCR senior staff attorney Omar Farah will join a panel at the 2017 National Lawyers’ Guild #Law4thePeopleConvention that will explore recent ways in which Muslims have struggled to safeguard their rights against government surveillance, oppressive legislation and Executive Orders, and bias-based attacks. The panelists will provide guidance for legal activists on how to combat these unrelenting assaults. Visit our website for more information about the panel, and for information about the convention, visit the NLG website.

On Tuesday, August 8, CCR executive director Vince Warren will join artist and activist Mariam Ghani for a discussion on identity and laws and policies put into place in the name of "national security" as part of the Guggenheim Museum’s Summer of Know series. The conversation will be moderated by Amara Antilla, assistant curator. Visit our website for more information.

Finally, on Friday, August 11, we’ll be at Netroots Nation in Atlanta, where Vince is participating in a panel titled, “No One Is Above the Law, Not Even the President: Attorney Generals and the Trump Administration.” For more information, and to register, visit the conference website.

Necessary to the Security of a Free State