Vincent Warren is a leading expert on racial injustice and discriminatory policing and is the executive director of the Center for Constitutional Rights. He oversees the organization's groundbreaking litigation and advocacy work, using international and domestic law to challenge human rights abuses, including racial, gender and LGBTQIA injustice. Under his leadership, the Center for Constitutional Rights successfully challenged the NYPD’s stop-and-frisk policy and profiling of Muslims, ended long-term solitary confinement in California’s Pelican Bay Prison, and established the persecution of LGBTQIA people as a crime against humanity. The Center for Constitutional Rights is currently challenging the abuse of migrants at the U.S. Southern Border, the Muslim Ban, the torture of prisoners in Abu Ghraib, and the criminalization of transgender people, as well as providing legal and policy support to Black, Brown, and Native organizers across the country.

Previously, Vince monitored South Africa's historic Truth and Reconciliation Commission hearings, and was a senior staff attorney at the ACLU and a criminal defense attorney for the Legal Aid Society in Brooklyn. He is a graduate of Haverford College and Rutgers School of Law.

Vince is a frequent guest on MSNBC and Democracy Now! and has appeared on Moyers & Company with Bill Moyers, CNN, and Fox News. His writing has been featured in the New York Times Room for Debate, the Guardian, on the Huffington Post, and on CNN.com, among other publications. 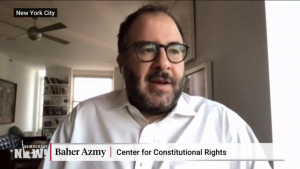 Having trouble watching the video? You can also view it on Democracy Now!'s website .

Will 'Dreamers' remain protected in the US?

Having trouble seeing the video? Watch it on Al Jazeera's website . 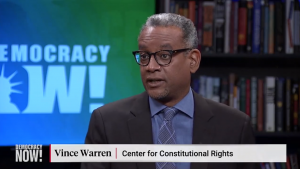 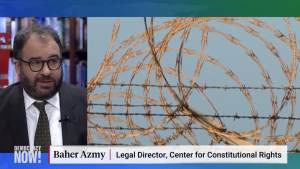 END_OF_DOCUMENT_TOKEN_TO_BE_REPLACED

We’re on the brink of a full-throttled return to officially sanctioned US torture. Our impulsive president has said he wants to bring back waterboarding “and a hell of a lot worse” and has now named Gina Haspel as the new CIA chief. Haspel personally oversaw torture at a CIA black site in Thailand...

How to Turn the KKK Into the Counter-Protesters

Our hearts go out to the families of those who lost their lives and were injured over the weekend in Charlottesville. We also want to deeply thank all who went to the streets to counter protest this particular expression of white supremacy. The protests turned predictably tragic because Trump is...

Who Does The Constitution Serve?

Host Brian Lehrer leads the conversation about what matters most now in local and national politics, our own communities and our lives. Jamil Smith fills in for Brian for the week. On this show: Michael Isikoff , chief investigative correspondent at Yahoo News, talks about the latest on the...

Trump’s firing of FBI Director James Comey, who is leading an investigation into his campaign’s collusion with the Russian government, is a dark moment in American history. World history is replete with dictators, despots, and authoritarians who have been rightly condemned for using their office to...
END_OF_DOCUMENT_TOKEN_TO_BE_REPLACED