Last week, in our landmark case, Ziglar v. Abbasi, the U.S. Supreme Court reversed a federal appeals court ruling that former high-level Bush administration officials may be sued for their roles in the post-9/11 profiling and abuse of Muslim, Arab, and South Asian men. 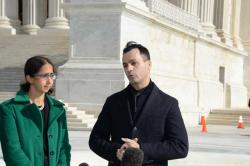 Justice Breyer, joined by Justice Ginsburg, read a powerful dissent from the bench, and compared the majority’s decision to other shameful moments in U.S. history when the courts looked the other way, noting that there have been “far too many instances where the executive or legislative branch took actions during time of war that, on later examination, turned out unnecessarily and unreasonably to have deprived American citizens of basic constitutional rights.”

As CCR senior staff attorney Rachel Meeropol, who argued the case, put it: “The Court’s decision allows for high-level officials to violate the Constitution without fear of personal accountability—a dangerous message in this time of rampant state-sponsored discrimination against Muslim and immigrant communities. As Justice Breyer noted in his dissent, ‘If you are cold, put on a sweater, perhaps an overcoat, perhaps also turn up the heat, but do not set fire to the house.’ I fear our house is ablaze.”

Like nearly a hundred other men, Benamar Benatta, one of the Abbasi plaintiffs, was detained as a "terrorism suspect" for many months based solely on his race, religion, ethnicity, and immigration status, and abused in brutal detention conditions. Benamar expressed a profound disappointment in the Court’s decision. “This is a total failure of justice in my opinion. To this day we see high-level officials either retired or still holding office talk and praise the effectiveness of torture and mistreatment of detainees despite mounting evidence to the contrary! It is only by holding high-level officials to account when their policies are ineffective or discriminatory that a country can properly heal and look forward to the future.”

The ruling is disheartening, but at the same time, there is more work to be done. The Court sent our claim against Warden Hasty, for allowing our clients to be abused at the Metropolitan Detention Center, back to the appellate court to determine if it may proceed. This means our clients may still be compensated for the terrible harm done to them, and that we will keep fighting to hold our government accountable for violating the Constitution — and we will keep you informed, as always, on our progress.

The 90-minute panel discussion included ACLU president Susan Herman, Brooklyn Law School professor K. Sabeel Rahman, and David Azerrad of the Heritage Foundation. Vince, citing the need for recognition of shared values and calling on us to create spaces for better, more honest conversations, stated that it’s more important than ever to challenge and resist the dismantling of democracy. He also emphasized the need for us to fight for one another: “I fundamentally reject that social advancement for any one particular group means a retraction for another group.”

"The benefits of collaboration are not abstract. This is a concrete example of how advocacy can influence the law."

CCR is honored to be included in Catalysts for Collaboration, which “seek[s] to encourage those who work for a free and open internet to collaborate across disciplinary silos in litigation. Our landmark stop-and-frisk lawsuit, Floyd v. City of New York, is featured as one of the case studies. Whether you're familiar with Floyd or new to the subject, it's a worthwhile and informative read, featuring several CCR folks, plus Joo-Hyun Kang of Communities United for Police Reform.