Rachel holds an undergraduate degree from Wesleyan University and graduated from NYU Law School. She has co-edited and written two editions of the Jailhouse Lawyers Handbook, a do-it-yourself litigation manual for prisoners distributed free by CCR and the National Lawyers Guild, and was the contributing editor of America’s Disappeared: Secret Imprisonment, Detainees, and the War on Terror, published by Seven Stories Press in 2005.

Rachel’s recent writing includes, “Activists are fighting to speak. Are you willing to listen?” on the Huffington Post, “Death row: America’s torture chamber” in The Guardian, and “Attention Left, Liberal and Radical Groups – Pennsylvania Has Been Monitoring You” on Common Dreams. She and her writing have appeared in outlets including The New York Times, The Boston Globe, The Guardian, Dan Rather Reports, and ProPublica.

In-depth: You’re a prisoner & you have rights 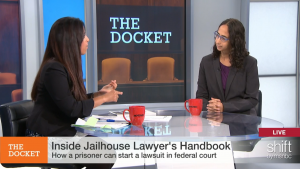 Rachel Meeropol, Senior Staff Attorney at the Center for Constitutional Rights, explains why the ‘ The Jailhouse Lawyer... 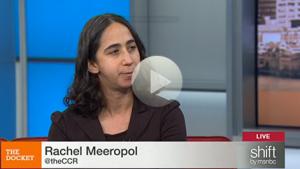 I say corporations are Destroying the Planet. So Sue Me?

This Thursday, a Canadian logging company named Resolute Forest Products will be in federal court, arguing that Greenpeace, STAND.earth, and “Jane Does 1-20” are part of a criminal racketeering enterprise. The crime: calling Resolute a “forest destroyer” in public campaign material, when Resolute’s...

No Justice When the Stakes Are High

This piece was originally published on the American Constitution Society's ACSblog . Having litigated the case that would become Ziglar v. Abbasi for the last fifteen years, since the summer I graduated from law school, my first impressions of the Supreme Court’s 4-2 decision were somewhat...

Are Bush officials above the law?

Today, nearly 14 years after the case began, the Supreme Court granted John Ashcroft and other Bush-era government officials’ requests to review CCR’s class action challenge to the post-9/11 immigration detentions. In Turkmen v. Ashcroft , the Supreme Court will directly confront, for the first...

It’s been almost fifteen years since 9/11, and the sweep of Arab, South Asian, and Muslim men from the streets of New York and New Jersey in the immediate aftermath of the attacks. Those of you who lived in New York City then surely remember it well: within days of the attacks, Middle Eastern men...
END_OF_DOCUMENT_TOKEN_TO_BE_REPLACED