CCR in the streets! 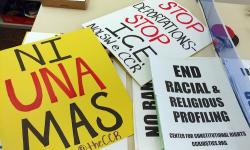 Yesterday, May 1, was May Day – International Workers’ Day – an official holiday in most countries. It’s a day when working people bring their grievances with capitalism and demands for equality into the streets.

This year, May Day was a day of mass protest against everything represented by the reactionary Trump regime, including its oppressive and racist policies on immigration and labor, and the broken system that facilitated his rise to power.

That’s why, yesterday, the CCR office was closed. CCR management and the union representing our staff, the National Organization of Legal Services Workers, agreed that this is a critical moment for all of us to honor the general-strike call and join with the fight-back movement in the streets. Because we’re not only parts of a progressive legal organization; we are also activists, organizers, educators, and members of affected communities.

Hitting back against suppression of speech on college campuses 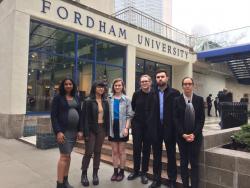 Students for Justice in Palestine at Fordham

Last week, CCR and Palestine Legal filed a lawsuit on behalf of students at Fordham University over the institution’s refusal to grant club status to Students for Justice in Palestine (SJP), claiming that SJP would lead to “polarization.” CCR deputy legal director Maria LaHood criticized Fordham’s rationale, saying, “If Fordham’s guarantee of freedom of inquiry means anything, it’s that students who want to advocate for Palestinian rights must be able to host events, invite guest speakers, distribute flyers, and post materials just like any other group. Even if the expression of views seeking justice in Palestine or demanding respect for human rights through BDS is considered polarizing or offensive to some, it is protected speech; indeed, it is the ideas that challenge us and foster debate that need to be protected most.”

The lawsuit has garnered a considerable amount of press. The New York Daily News, the New York Post, New York magazine, and even Inside Higher Ed have reported on it, just to name a few outlets.

Censorship of Palestinian rights advocacy is widespread, particularly on college campuses. Fordham’s treatment of SJP is part of a broader pattern of repression against Palestinian human rights activism, particularly on campuses, which includes administrative disciplinary actions, harassment, firings, baseless legal complaints, and false accusations of terrorism and anti-Semitism. Palestine Legal responded to 650 such incidents of suppression targeting speech supportive of Palestinian rights from 2014 to 2016. By bringing this lawsuit,  these Fordham students are determined to ensure that they, and others, can speak freely about an urgent human rights issue.

Fordham student and plaintiff Ahmad Awad, who is one of the club’s founders, told the Bergen Record, “I want to have civil rights and equality for all, especially for Palestinian people. I want an understanding of what they have to deal with on a daily basis and the horrible occupation they are forced to endure. I feel the best way to bring change is establishing at Fordham a group that brings a different dialogue and perspective to the discussion table about the Palestinian-Israeli conflict.”

“Students go to Fordham to exchange ideas and advocate for the disenfranchised, as Jesuit values would presumably encourage,” said Palestine Legal staff attorney Radhika Sainath. “The law is clear: Fordham can’t promise freedom of expression and then take it away when it comes to advocacy for Palestinian rights.”

CCR senior staff attorney Darius Charney and legal worker Ian Head published an op-ed in the New York Times, outlining the clear flaws and falsehoods in the NYPD’s body-worn camera pilot program, which we fought against in court. In “Don’t Let the NYPD Co-Opt Body Cameras,” they write:

The whole point of this body camera pilot is to curb police officers’ violations of New Yorkers’ rights. That’s why a federal court ordered the program in 2013 in Floyd v. New York City, which we litigated. The decision in the case said that body cameras could be “uniquely suited to addressing the constitutional harms” that the court found were pervasive in everyday street encounters known as stops-and-frisks.

As it stands, the policy, called an “operations order” in department parlance, allows officers to view not only their own camera recordings but also those of colleagues before they complete reports or make official statements to investigators. This permits officers to fit their statements to video recordings, which public defenders say is already a significant problem.

Civilians don’t have this luxury. If New Yorkers want to see footage so that they can file misconduct complaints about incidents captured on police cameras, they must file either a Freedom of Information Law request for the video footage, which can take months to years, or give an interview to investigators without an opportunity to review the video first.