A Celebration of CCR at 50

In the past 50 years, CCR has cemented its reputation as a legal pioneer, and our work has been consistently ahead of the curve in the field, both in recognizing a problem and in suggesting novel or radical legal responses to it. The common threads of creativity and passion weave through our work—so it’s only logical that our 50th anniversary celebration on October 6 would feature creative and passionate performers and collaborators. Tomorrow night will be a memorable night for many reasons. 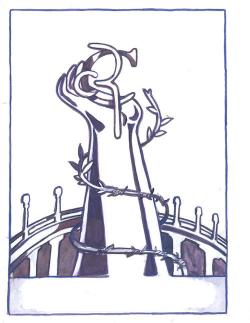 We have the pleasure of hosting what are sure to be stellar live performances. Barbara King and the Spirit of Jazz will be performing during the cocktail hour. Famed activist orchestra Dream Unfinished has composed a multimedia, interactive tribute to late CCR visionary and leader Michael Ratner. We have a secret special musical act for the main event that you really won’t want to miss, a musical performance from the legendary Brian Jackson, and famed international deejay and producer DJ Center will bring the house down at our after-party. Throughout the night, we’ll be featuring remarks from CCR family and celebrating Michael’s life, work, and spirit.

In addition, we will be exhibiting several pieces of artwork by our client Ghaleb Al-Bihani, who has been detained without charge in Guantánamo since 2002, and cleared for transfer since 2014. Ghaleb, who discovered a talent for art in routine classes offered to detainees, told us, “Painting makes me feel as if I am embracing the universe….I also see things around me as if they were paintings, which gives me the sense of a beautiful life.”

Ghaleb created this particular drawing for CCR on the occasion of our 50th as an expression of thanks to us and to all our supporters for our steadfast support of him over the years. The drawing will be sold via silent auction during party, and will be featured alongside artwork by CCR client Djamel Ameziane, who was released from Guantánamo in 2013.

It's not too late to get tickets for tomorrow night! We hope you’ll join us to celebrate the past 50 years of CCR’s illustrious history and toast to our next 50 years, in which we continue to innovate, pioneer, and create new memories.