Every four years, the U.N. Human Rights Committee evaluates whether a government is in compliance with the International Covenant on Civil and Political Rights (ICCPR) and is following previous recommendations on areas that need improvement. Last week, the U.S. government received its report card. The grades range from “A” to “E”, with C1 or below considered unsatisfactory. As the copious amounts of red ink in the report card below show, the U.S. government is flunking. 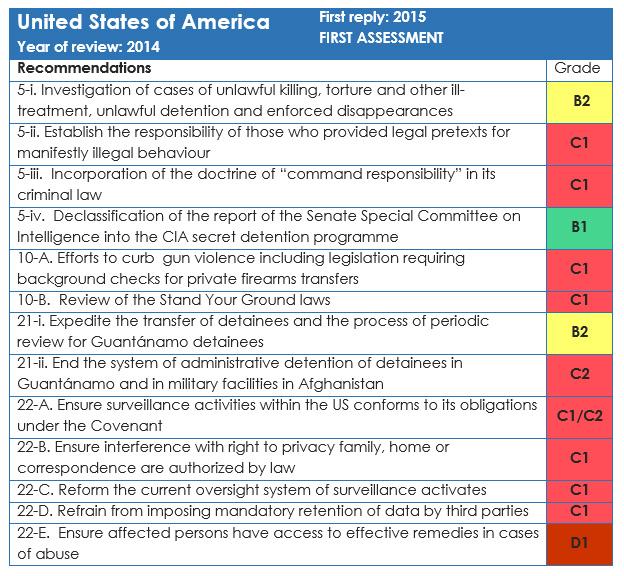 This report card is the outcome of an ICCPR review process that began in 2014, when a U.S. government delegation met with the U.N. Human Rights Committee in Geneva to report on all steps taken to address human rights violations previously identified by the U.N. Committee. In its opening statement at the onset of the review, the U.S. delegation stated that they viewed the “protection of civil and political rights as something that is more than a set of legal requirements, but as fundamental to our cultural identity, developed throughout our nation’s history.”

Because government officials cannot be trusted to paint an accurate picture of the U.S. human rights record, CCR travelled to Geneva as part of an 80-person delegation of U.S.-based NGOs to aid the U.N. Committee in fact-checking the U.S. government’s account. Ensuring public scrutiny of U.S. actions from international bodies like the U.N. Human Rights Committee is a key part of CCR’s advocacy work, and helps us bring an international human rights law perspective into our domestic litigation, lobbying, and public education work.

In Geneva, CCR briefed Committee members on a number of critical issues, including the NYPD's racially discriminatory stop-and-frisk practices and its religious profiling and surveillance of Muslim communities; the epidemic of prolonged solitary confinement in U.S. prisons; the continued indefinite detention without charge of our clients at Guantánamo; and the policy of force-feeding those hunger-striking as a means of protest, including our client Tariq Ba Odah, whose case was recently highlighted by the New York Times Editorial Board.

The Committee addressed many of these concerns in a series of scathing concluding observations on U.S. compliance with the ICCPR, and gave the U.S. government a year to implement recommendations and report back on its progress.

A year later the U.S. had little to show for its efforts.

Far from closing Guantánamo, the practice of indefinite detention continues with no end in sight. Currently, 116 prisoners remain in limbo, the overwhelming majority in their fourteenth year of detention without charge. Despite a few dozen transfers in the last year and a half, 52 men, long cleared for release, remain imprisoned.

The Periodic Review Boards at Guantánamo continue, but at a glacial pace—in two years less than a third of the prisoners eligible have actually had a review. A year after we told his story to the Committee in Geneva, Tariq Ba Odah continues to be subjected to the cruel and degrading practice of force-feeding, and worse, medical experts say that he is on the “precipice of death”, so severely malnourished that he needs urgent medical care that he can’t get in Guantánamo. For Tariq and our other cleared Yemeni clients—Fahd Ghazy, Mohammed Al Hamiri, and Ghaleb Al Bihani, progress on Guantánamo means only one thing: freedom.

And while the U.S. declassified the executive summary and key findings of the Senate Torture Report in December, the full report—totaling more than 6,000 pages—remains classified. Evidence and startling examples of CIA savagery and treachery continue to mount, yet the U.S. government has continued to look the other way. Real transparency will be the declassification and release of the full report and Panetta Review and the first step for real accountability is for the U.S. to open a criminal investigation of the CIA program—how it was authorized, carried out, and covered-up. Torture is illegal, plain and simple. Those responsible for these crimes must be prosecuted.

With regards to prisons in the States, the US continues to hold prisoners in isolation with terrifying ramifications for their health and well-being, as demonstrated in a New York Times science feature on the research that CCR commissioned and compiled for our class-action lawsuit on behalf of prisoners in solitary in California’s Pelican Bay prison.

And while discriminatory policing was the subject of much of the March 2014 ICCPR review, the U.S. continues to kill Black, Latino and other people of color at startling rates – the Guardian just estimated that there have been just under 700 police killings in 2015 thus far – compounding the reality that local police departments continue to violate peoples’ lives, dignity and well-being without fear of punishment or accountability.

Flunking is not an option when it comes to human rights. At stake are real lives and fundamental freedoms.