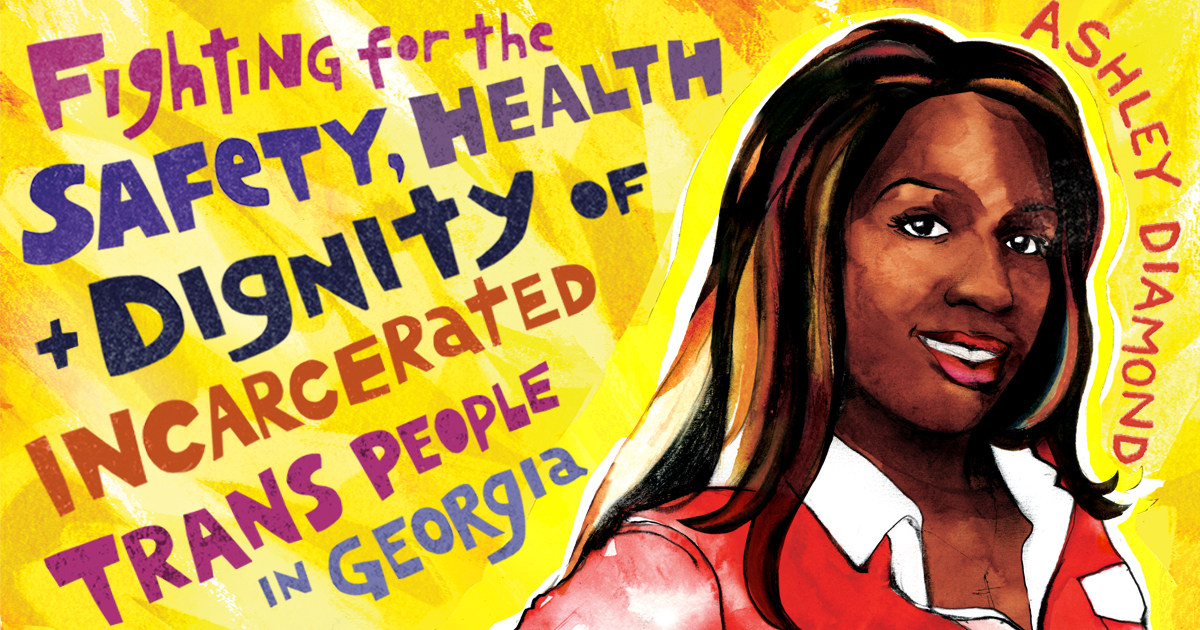 "This fight is not just my fight, it's our fight. My hope is that the future is brighter for people like me. I hope this lawsuit forever changes the way transgender people in Georgia are treated."

Update: In August 2022, Ashley Diamond was released from prison and will serve the remainder of her sentence on parole. Read more at the press release.

Ashley Diamond is a Black trans woman and social justice activist from Rome, Georgia whose landmark lawsuit against the Georgia Department of Corrections (GDC) made national headlines in 2015. She was re-imprisoned after a technical parole violation and while incarcerated at Coastal State Prison, a men's facility in Garden City, Georgia she was subjected to brutal and unrelenting abuse and mistreatment by GDC. Ashley was sexually assaulted repeatedly, denied vital healthcare for her gender dysphoria, and faced other threats to her safety. In November 2020, Ashley sued GDC for the second time for its failure to protect her from sexual assault and provide her with adequate healthcare. In August 2022, Ashley was granted parole and released from GDC custody.

In Ashley’s first case (“Diamond I”), the court found that she had a constitutional right to be protected from sexual assault and provided treatment for gender dysphoria. Ashley settled her lawsuit in 2016, securing system-wide policy changes related to medical care for trans people incarcerated in Georgia prisons, sexual assault prevention, and personnel training.

Notably, the United States Department of Justice (DOJ) weighed in on the lawsuit with a Statement of Interest that discussed the unconstitutionality of “freeze-frame” policies that prevented many incarcerated trans people from accessing hormone therapy and asserted that prison officials are obligated to assess and treat gender dysphoria, just as they would any other medical or mental health condition. Following that intervention, and after receiving a series of complaints of abuse, DOJ opened an investigation into GDC in 2016. This was the first DOJ investigation of its kind into the treatment of LGBTQIA+ people in prisons. The investigation is ongoing (see below for more information).

Though the system-wide policy changes were significant, Ashley’s recent experience and those of other incarcerated trans people show that GDC’s written trans medical care and sexual violence prevention policies are in reality hollow promises  – prompting this lawsuit. Ashley’s situation was dire and urgent, but GDC took no immediate action to transfer Ashley out of a men’s facility. By naming officials and staff at GDC as defendants, the lawsuit demands that GDC fulfill its legal obligations to provide Ashley, and all incarcerated trans people, medically necessary treatment for gender dysphoria and protection from sexual assault.

Currently, GDC's trans medical care policy is a ceiling when it should be the floor for treating gender dysphoria. In practice, Ashley and other trans individuals in GDC custody may receive hormones, but even that treatment is often inconsistent and only provided after long delays and complicated processes of approval. However, they rarely receive other critical gender-affirming treatment or care items  – for example, permission to wear cosmetics and jewelry, access to gender-appropriate clothing items and grooming care, being addressed by the correct gender, prevention of harassment by staff, access to surgery if desired, ability to remove body hair, permission to wear their hair at their desired length, and competent, holistic mental health care for treatment of gender dysphoria and any PTSD resulting from experiences of anti-trans violence and harassment while incarcerated. GDC's policies fail to meet the minimal Standards of Care recommended to treat gender dysphoria by the World Professional Association for Transgender Health (WPATH Standards) and recognized as the overwhelming consensus of the healthcare community.

GDC fails to adhere to its own policies as well as federal laws that prohibit sexual assault, abuse, and harassment

This case exposes how GDC's policies and practices perpetuate transphobia and gender and sexual-based violence. Federal laws like the Prison Rape Elimination Act (PREA) and GDC's own policies acknowledge that trans people in custody face a heightened vulnerability to sexual assault, and a series of factors should be considered when determining housing placement, including the individual's desired placement and safety risks. GDC had full knowledge that Ashley faced repeated sexual assault in a men's facility from her previous incarceration, and yet it still put her in danger by placing her in men's facilities again. She was sexually assaulted more than 14 times in the past year by other incarcerated people and GDC staff during her most recent time in GDC custody.

The actions of one defendant, Rodney Jackson, Unit Manager at Coastal, offer a prime example of staff contributing to an unsafe environment and signaling to other staff and incarcerated people that GDC would not protect Ashley from abuse. A day before Ashley moved into her living quarters in Coastal State Prison, a men's facility, Jackson called a dormitory-wide meeting and announced her status as a trans woman, disclosed confidential medical information, and described her as "a freak," "he," and "it." Shortly after this meeting, Ashley was assaulted.

The Department of Justice

In April 2021, DOJ filed a Statement of Interest in Diamond v. Ward, et al. that affirms that prison officials violate the U.S. Constitution and the Eighth Amendment's prohibition on cruel and unusual punishment when they refuse trans women placements at female facilities when needed for safety, or deny trans people gender dysphoria care beyond hormone therapy without conducting individualized assessments of their needs. On September 14, 2021, DOJ announced an investigation of conditions in Georgia state prisons, and that it will also "continue its existing investigation into whether Georgia provides lesbian, gay, bisexual, transgender and intersex prisoners reasonable protection from sexual abuse by other prisoners and by staff."

As a Black trans woman, Ashley experiences the compounding oppressions of anti-Blackness, misogyny, and transphobia. Her brutal experiences while incarcerated and on parole illustrate the precarity and bias faced by trans people nationwide. Trans people are often forced to deal with a multitude of structural biases at the federal, state, and local level and must navigate the discrimination-to-incarceration pipeline where they face discrimination in education, employment, health care, housing, and access to other basic services, and overpolicing and surveillance. This leaves them with limited choices, forces them into criminalized economies, and then incarcerates them as punishment for their survival.

Many of these issues persist outside of prisons, too. Probation and parole are often an extension of the brutality, control, and transphobia that trans people are subjected to while incarcerated. Trans people experience restrictive probation and parole policies, and face challenges finding trans-inclusive re-entry support and resources. Read more about Ashley's experiences at her online profile.

"We are the voice of change. Being Black is hard, it's even harder and definitely deadly being trans, but the best is coming."- Ashley Diamond

From the start, Ashley has been committed to using her voice to amplify the experiences of other incarcerated trans people. Her activism is part of a rich legacy of resistance and leadership of Black trans women, including those who have organized in prisons.

Together with the Southern Poverty Law Center, we are holding the Georgia Department of Corrections accountable, helping to make more visible the experiences and courageous organizing of trans people in Georgia prisons and working with and uplifting the incredible work of grassroots allies who are fighting for the safety, dignity, and rights of all trans people.

Ashley Diamond is a Black, transgender woman and social justice and prisoners' rights activist whose landmark victory against the Georgia Department of Corrections (GDC) in 2016 made national...
Read More