In 2018, the Louisiana Mid-Continent Oil and Gas Association (LMOGA) drafted and proposed an amendment to Louisiana’s Critical Infrastructure law, which was passed by the legislature, that is so...

On November 9, 2021, the Center for Constitutional Rights and the Descendants Project, an organization founded to advocate for descendants of people once enslaved in Louisiana’s river parishes, filed...

Arkansas Times v. Waldrip is a case that challenges a 2017 Arkansas anti-BDS law that requires companies that contract with the state to pledge not to boycott Israel or reduce their fees. The Center...

In June 2021, due to a "terrorism enhancement" that the judge imposed at the prosecution's request, Jessica Reznicek was sentenced to eight years in federal prison. Jessica pleaded guilty to a single...

Jordahl v. Brnovich is a case that challenges Arizona’s 2016 anti-BDS law that forbids the state from contracting with companies that boycott Israel. The Center for Constitutional Rights and...

Amawi v. Paxton and Pluecker, et al. v. Board of Regents of the University of Houston System, et al. are two consolidated cases that challenge the 2017 Texas anti-BDS law that forbids the state from...

CCR, together with Louisiana Bucket Brigade, Atchafalaya Basinkeeper, and 350 New Orleans, has filed a petition in Louisiana state court seeking the release of records relating to the communications...

On behalf of the Louisiana Bucket Brigade, the Center for Constitutional Rights filed a public records request with the Louisiana Department of Environmental Quality (LDEQ) seeking records related to...

“Corporate capture” is a phenomenon where private industry uses its political influence to take control of the decision-making apparatus of the state, such as regulatory agencies, law enforcement entities, and legislatures. When corporations draft legislation privately with lawmakers that they have significant influence over, this results in laws and policies that benefit corporations, while often harming the environment, low-income people, and communities of color.

The Center for Constitutional Rights has a long legacy of defending progressive political movements from attacks their opponents wage using the law. Corporate entities like the American Legislative Exchange Council (ALEC) have used political influence to pass a series of laws that result in attacks against our allies. ALEC is an incubator and platform for spreading policies that support the political agenda of its corporate and conservative members. ALEC has become one of the most powerful, and lesser known, platforms of its kind in U.S. politics today.

In recent years, the Center for Constitutional Rights has defended several movements facing repressive laws that are affiliated with ALEC, such as animal rights activists targeted by Ag-Gag laws; water protectors that resist oil and gas infrastructure development targeted by Critical Infrastructure laws; and Palestinian rights activists targeted by anti-Boycott, Divestment, and Sanctions laws. ALEC has played a significant role in developing and promoting all these state laws with its members.

In the wake of these fights, the Center for Constitutional Rights has teamed up with our movement allies to focus on the source of some of these laws while we continue to defend our allies from the attacks directed at them. This work has involved litigating to demand that ALEC no longer meets with lawmakers in private to draft legislation; publishing research into ALEC’s activities; and supporting communities affected by ALEC to connect with each other for joint advocacy efforts when ALEC meets.  One result of this collaboration is a report the Center for Constitutional Rights produced with our allies the Dream Defenders, Palestine Legal, The Red Nation and the US Campaign for Palestinian Rights.  The report is called "ALEC Attacks: How evangelicals and corporations captured state lawmaking to safeguard white supremacy and corporate power".  The report covers the origins of ALEC and the long legacy that ALEC inspired laws have had on people of color. 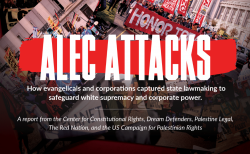 Beyond our work addressing ALEC, the Center for Constitutional Rights is also targeting other ways corporations use their power to assume the authority of the state to advance their own private agendas. We have filed and litigated public records requests to reveal the extent of the private relationships between corporations and state agencies in the process of approving licenses corporations need for building fossil fuel operations in Louisiana. We have also litigated to demand that fossil fuel corporations exerting the authority of the state to expropriate people’s land should be subject to the same transparency requirements as state agencies.

The Center for Constitutional Rights Corporate Capture Project will develop additional litigation and political advocacy activities in the coming years to address the corporate control of law and policy making, which is a root cause of corporate human rights abuses.

Black community leaders from Louisiana who addressed committee earlier this month hail recommendations August 30, 2022, Geneva – For the first time, the UN Committee on the Elimination of Racial Discrimination (CERD) is calling on the U.S. government to begin the process of providing reparations to...
May 19, 2022

Greenfield Louisiana relying on illegal rezoning ordinance to try to build massive grain terminal on land in historic Black community May 19, 2022, St. John the Baptist Parish, Louisiana – An organization that advocates for descendants of enslaved people filed a motion requesting a temporary...
February 15, 2022

Billionaire Investor Chris James, hailed as a green hero, is behind project seeking to make use of an old zoning ordinance shrouded in corruption that threatens the health, culture, and very existence of a historic Black community November 9, 2021, St. John the Baptist Parish, Louisiana ‒ The...
October 11, 2021

On Indigenous Peoples’ Day, the Center for Constitutional Rights Stands in Solidarity

October 11, 2021 — In recognition of Indigenous Peoples’ Day, the Center for Constitutional Rights issued the following statement: From our offices on occupied Lenape territory in lower Manhattan, we stand in solidarity with the nearly seven million Indigenous people in this country, who continue...