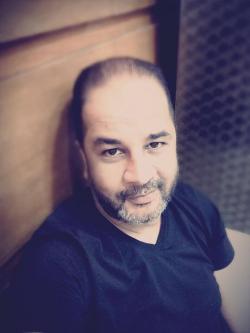 Yasser Ebrahim is one of the original plaintiffs in Ziglar v. Abbasi (formerly Turkmen v. Ashcroft), a lawsuit filed in 2002 on behalf of a class of Muslim, South Asian, and Arab non-citizens swept up in connection with the 9/11 investigation. From October 2001 to June 2002, Yasser was detained at the Metropolitan Detention Center (MDC) in Brooklyn, New York, where he was held in harsh and punishing solitary confinement in the Administrative Maximum Special Housing Unit (ADMAX SHU). Like nearly a hundred other men, Yasser was detained as a "terrorism suspect" based solely on his race, religion, ethnicity, and immigration status, and abused in brutal detention conditions for the many months it took the FBI and CIA to clear him of any connection to terrorism.

In January 2001, Yasser entered the U.S. on a tourist visa. He had made several earlier visits, and this time returned with his younger brother Hany. They shared an apartment in Brooklyn with several friends from Egypt and Morocco. Yasser began a website design business, and when he wasn't working, he loved going to the theater, working out, and keeping up with new tech gadgets and cars. He reflects nostalgically about his time in the U.S.: "I miss the freedom, how everything was possible. I can recall the smell of freshness in everything in the morning, the subway, the coffee and the hot bagels."

On September 30, 2001, Yasser's life was forever changed. He was in his apartment with Hany and their roommates, when FBI and INS agents came to their home. The agents interrogated the men asking them questions about their immigration status and terrorist activity in the United States, without advising them of their rights. They all denied any involvement in the September 11th terrorist attacks or any other terrorist activity. When the interrogation was over, the agents arrested Yasser, Hany, and an Egyptian roommate, and denied their request to call an attorney. Without any of their consent, the agents conducted a search of the apartment, seizing personal belongings. They were taken to the Varick Street immigration facility in Manhattan, where they were questioned again. Yasser and Hany were held for approximately 24 hours at the INS facility in Manhattan.

On October 1, 2001, Yasser and Hany were taken to MDC in handcuffs, chains, and shackles. When they arrived, they were fingerprinted, strip searched, and given orange jumpsuits to wear. They were escorted upstairs to the Special Housing Unit on the ninth floor, had their heads repeatedly slammed into the wall and called "Fucking Muslims" and "terrorists" along the way.

"Being detained then is still the most horrible thing that ever happened to me. I have witnessed how bad anyone's life could get if he was hated by everyone around him for a crime he never had anything to do with. Being tortured and abused and seeing my younger brother go through this every day is an image I still struggle to erase from my memory," Yasser recalls about his time in MDC.

Yasser was placed in the ADMAX SHU without justification and remained in harsh conditions for the entire length of his detention at MDC. He was locked in his cell for nearly 24 hours a day every day. He was denied access to the outside world, arbitrarily and abusively strip-searched, subjected to sleep deprivation and interference with his religious practice, denied basic personal items like soap and toilet paper, and deprived of adequate food.

His brother was held in these restrictive conditions with him for months, but in February of 2002, Hany was moved into the prison's general population without explanation. For the following months they were unable see each other, and worried about each other constantly. The only solace was that they were allowed to write letters back and forth to each other, delivered by prison guards.

The FBI never developed any evidence to tie Yasser to any terrorist activity, or indicate that he might be dangerous. His identity as a Muslim from Egypt was the only reason he was suspected of a connection to terrorism. INS could have removed him within days of his deportation order, but he was held for nine months solely for investigation.

Yasser was finally released and deported on June 6, 2002. He faced many hardships when he returned to Egypt, where the stigma of detention followed him. He was questioned extensively by Egyptian security officials who had trouble understanding how he could have been detained for such a long time without charge by the U.S., and it was difficult for him to persuade people of his innocence and that his detention was just a big mistake.

Before his detention, Yasser "thought that the American constitution was stronger than anything and cannot be violated regardless of the circumstances," but his experience showed him that officials could manipulate the constitution, and people would look the other way.

"It is important to strengthen the freedom principles of America, those principles that many Americans sacrificed to maintain. This lawsuit is sending a strong message to those that wish to tamper with that. This lawsuit sends a message to the regular American citizen that if you accept the violation of rights of a human being just because he is not American, the day will come when it happens to your fellow citizens or yourself, and it will be too late. I don't wish to see what happened to me happen again to anyone because they are [profiled] because of their color, race, or religion."

In 2009, Yasser and four other plaintiffs reached a monetary settlement with the government. To continue the work of holding high-level officials accountable, CCR filed an amended complaint with additional plaintiffs, and the case remains pending.