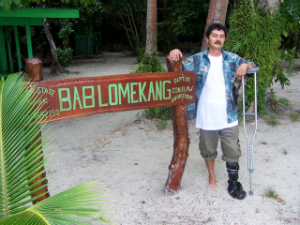 Ahmad Abdulahad is a thirty-eight year old ethnic Uighur who, until his release to Palau in October 2009, was unlawfully imprisoned at Guantanamo Bay since 2002. The United States government cleared him for release in December 2005. In October 2008, the Bush administration acknowledged that he is not an enemy combatant.

Mr. Abdulahad was born in the Xinjiang Autonomous Region, a western province of the People’s Republic of China known to its native Uighur population as “Turkistan” or “East Turkistan.” In Xinjiang, Mr. Abdulahad studied for three years at a vocational college and received a diploma. Mr. Abdulahad is a husband and father of three young children.

In Xinjiang, Mr. Abdulahad, like his fellow Uighurs, was unable to practice his religion freely, attend mosque, or express his basic human rights. Significantly, Mr. Abdulahad experienced Chinese oppression and persecution first hand. The Chinese government had instituted a coercive birth limitation policy under which authorities forcibly subject pregnant Uighur women to state-sponsored abortions. Pursuant to this policy, the Chinese government approached Mr. Abdulahad's home and threatened to enforce an abortion on his wife if she had any additional children.

It was against this backdrop that Mr. Abdulahad fled his homeland and escaped this severe religious and political persecution. In 2000, he fled Xinjiang, initially to Kyrgyzstan and later to Pakistan, before ultimately settling in Kabul, Afghanistan. During the pre-war period, Uighur refugees from Xinjiang often fled to Afghanistan, which offered a temporary refuge from the invariable risk of extradition that Uighurs routinely faced in other Central Asian states.

In the fall of 2001, Mr. Abdulahad was living peacefully in Kabul. Following the September 11, 2001 terrorist attacks, the United States commenced military operations in Afghanistan against al Qaeda and the Taliban. In light of the escalating hostilities, Mr. Abdulahad fled north to search for a safe place to reside. The roads were clogged with other refugees, as well as Taliban soldiers fleeing the advance of the Northern Alliance. Although he was unarmed and was not supporting or participating in any combat, hostilities or military action of any kind, Mr. Abdulahad was captured, along with other foreigners, by the forces of General Abdul Rashid Dostum, a notorious Afghan-Uzbek warlord who has since been implicated in major war crimes and human rights abuses. (See Blood-Stained Hands: Past Atrocities in Kabul and Afghanistan’s Legacy of Impunity, Human Rights Watch (2005)).

At this time, the U.S. military was distributing bounty leaflets throughout Afghanistan promising “wealth and power beyond your dreams” for the handover of “Taliban.” In exchange for these financial rewards, the Northern Alliance, as well as local warlords and villagers, were turning over anyone they could find. General Dostum’s forces sold Mr. Abdulahad to the U.S. military for a $5,000 bounty. Mr. Abdulahad, like hundreds of men, was swept up in a conflict in which he had taken no part.

Mr. Abdulahad was taken to Qalai Janghi Prison near Mazar-E-Sharif and held there along with other prisoners. In November 2001, some of the prisoners staged a revolt against their captors that was quelled by U.S. Special Forces. Although he took no part in this uprising, Mr. Abdulahad suffered severe injuries to his left leg during an airstrike. In early 2002, Mr. Abdulahad was strapped to a gurney and forcibly transported to Guantánamo. Shortly after his arrival at Guantanamo, Mr. Abdulahad underwent a below-knee amputation of his left leg.

Mr. Abdulahad currently wears a prosthesic device that was supplied by the U.S. military. He experiences severe pain and discomfort when he walks on this prosthesis. The poorly fitted device rubs painfully against his residual limb when he is walking, sitting or standing, which has caused blistering of his skin, a condition which is aggravated in hot, humid climates. This prosthesis has significantly limited his ability to walk short distances, manage routine activities on his own, and stand for brief periods of time. Due to the limited medical care he received in Guantanamo, Mr. Abdulahad has been unable to achieve full ambulation. To engage in daily activities, he must rely on the assistance of his fellow Uighurs. Though he is only thirty-eight years old, he requires the assistance of crutches to ambulate independently.

Mr. Abdulahad's near-decade long confinement at Guantanamo had been severely exacerbated by the loss of his limb. To make a successful transition to life as a free man, Mr. Abdulahad must be permanently resettled in a modern, industrialized nation that can provide him with the high quality medical care he will need to achieve full ambulation. Because his prosthesis and socket (which holds the prosthesis in place) have not been properly fitted, he will require considerable medical care. This will include frequent and ongoing attention from a skilled prosthetist who can craft a new, viable socket and select the correct prosthesis for his residual limb. Providing him with this high quality medical care will enable him to walk long distances, work full-time and have a meaningful impact on the kind of life he can make for himself.

Mr. Abdulahad is a well-educated, ambitious and peaceful young man. Of the Uighurs in Palau, Mr. Abdulahad is one of the best – if not the best – English speakers. Despite the adversity he has faced, he is extraordinarily motivated. Although he appreciates that his physical condition may limit his future employment opportunities, he is looking forward to finding employment, becoming self-sufficient and regaining much of the mobility he had before Guantanamo.

Mr. Abdulahad requires permanent resettlement in a country with an existing Uighur community that can help him overcome the unique physical, emotional and linguistic challenges faced by immigrants with disabilities. Numerous studies demonstrate that the success of a post-amputation rehabilitation program depends in large part on the patient’s ability to access a community willing to provide counseling, transportation to health care providers and assistance in social integration. Physicians, prosthetists and amputation survivors consistently emphasize the critical importance of a strong social network capable of providing physical, emotional and day-to-day logistical support to an amputee recovering from the inevitable psychological trauma that accompanies such an extraordinary surgery.