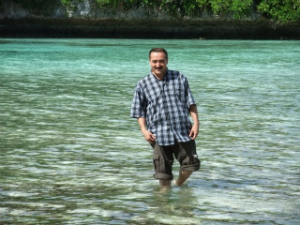 Abdul Ghappar Abdul Rahman is a thirty-six year old ethnic Uighur who, until his release to Palau in October 2009, was wrongfully incarcerated in the Guantánamo Bay since 2002. The United States government cleared him for release in August 2003. In October 2008, the Bush administration acknowledged that he is not an enemy combatant.

It was against this backdrop that Mr. Abdul Rahman made the difficult decision to leave his homeland to escape the religious and political persecution he suffered as an ethnic Uighur. In June 2001, he fled China, traveling initially to Kyrgyzstan and then to Pakistan. However, he was unable to remain safely in these countries, which are notorious for forcibly returning Uighur expatriates to China. Mr. Abdul Rahman heard that other Uighurs were living peacefully in a village near Jalalabad, Afghanistan, and he knew that he could travel to Afghanistan inexpensively. During the pre-war period, Uighur refugees from Xinjiang often fled to Afghanistan, which offered a temporary refuge from the invariable risk of extradition that Uighurs routinely faced in other Central Asian states.

In the fall of 2001, Mr. Abdul Rahman was living peacefully outside Jalalabad with several dozen other Uighurs. Following the September 11, 2001 terrorist attacks, the United States commenced military operations in Afghanistan against al Qaeda and the Taliban. Mr. Abdul Rahman, along with a group of seventeen other Uighurs, traveled east into the mountains and continued to Pakistan, hoping to find safety from the U.S. bombardment.

In Pakistan, Mr. Abdul Rahman and his Uighur companions were greeted by local tribesmen who welcomed them into their village and provided them with food and shelter for the night. This was not an act of charity. At this time, the U.S. military was distributing bounty leaflets throughout the border areas of Pakistan promising “wealth and power beyond your dreams” for the handover of “Taliban.” In exchange for these financial rewards, Pakistani tribesmen and villagers were turning over anyone they could find. Unbeknownst to the Uighurs, their hosts had already determined to kidnap them and turn them in for bounty. Although they were unarmed and had not supported or participated in any combat, hostilities or military action of any kind, Mr. Abdul Rahman and his fellow Uighurs were awoken in the night and taken to a police station where they were held with other foreigners abducted in Pakistani tribal areas.

Mr. Abdul Rahman and his seventeen Uighur companions were sold to the U.S. military for approximately $5,000 each. Shortly thereafter, Mr. Abdul Rahman, along with his Uighur brothers, was transported to the U.S. Naval Station at Guantánamo Bay, Cuba. There, he remained unlawfully imprisoned for nearly eight years simply because he was a refugee with nowhere to go.