"It has become our destiny now to die without being guilty of any wrongdoing, knowing that even death, which could relieve us from this injustice and this suffering, is unreachable to us. Here we are dying slowly under continuous psychological torture while the world is watching." Sharqawi Al Hajj, Guantánamo Bay, Cuba, 2018 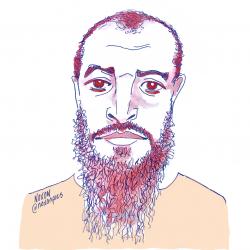 Sharqawi Al Hajj , 47, a citizen of Yemen, has been imprisoned in Guantánamo since 2004, after over two years in CIA sites. Like most of the 40 prisoners still being held, the government has never charged him with a crime, will likely never charge him, and may never release him. Because he is gravely ill today, he could die in Guantánamo. In June 2021, the government approved Al Hajj for transfer through the Periodic Review Board process, creating the first possibility Al Hajj has had for release in 19 years of captivity.

In a reversal of policy under two prior administrations, Trump said he would not release any remaining detainee, regardless of individual circumstance and, indeed, no detainee, with one limited exception, has been released since January 2017. The single transfer was of an individual released pursuant to a plea deal brokered under the Obama administration.

After four years under the Trump administration with virtually no transfers, and nearing two decades of detention for many of the remaining detainees, the situation in Guantánamo has reached a crisis point for Sharqawi and other men. These are men suffering the unique cruelty of indefinite detention, combined with the effects of years of torture of the sort documented in scores in Guantánamo and CIA sites where detainees were held. They comprise an aging, increasingly sick population nearing a breaking point.

Sharqawi’s mental and physical health have declined dramatically over the last two years. In 2017, his attorneys filed an emergency motion for an independent medical evaluation after he collapsed in his cell following a hunger strike and hospitalization in Guantánamo. Preceding his collapse, he had reported severe, long-standing symptoms, including acute abdominal and urinary pain, extreme weakness and fatigue, and recurring jaundice. An outside medical assessment in support of his emergency motion stated that his physical ailments, in combination with his hunger strikes and the effects of his CIA torture, could lead to “total bodily collapse.” Since then, his condition, and particularly his mental health, have worsened to an alarming point. In October 2018, his attorneys alerted the court and the government to new signs of mental decline in another filing. In July 2019, Sharqawi made unprecedented statements about wanting to take his life, and, in August 2019, he cut his wrist during a phone call with his lawyer. After leaving Sharqawi's emergency motion for outside medical care pending for two years, and in the face of his demonstrably worsening health, the district court denied the motion in September 2019, characterizing his suicide attempt as a "scratch." He has continued to do self-harm, and his status today remains precarious. At his Periodic Review Board hearing in April 2021, his counsel detailed his declining health in a statement to the Board.

Sharqawi’s medical situation is profiled in the Center for Victims of Torture (CVT) and Physicians for Human Rights (PHR) report, Deprivation and Despair: The Crisis of Medical Care at Guantánamo (2019).

Sharqawi is among the 119 CIA detainees named in the Senate Select Committee on Intelligence's Study on the CIA's Detention and Interrogation Program. Before Guantánamo, Sharqawi was detained for over two years in secret prisons in Jordan and Afghanistan, as detailed in public unclassified district court filings in his habeas case.  In Jordan, he was beaten regularly and threatened with electrocution and physical violence. He was then rendered to a CIA prison in Afghanistan, where he was kept in complete darkness and subjected to continuous loud music. He remained in that prison for approximately five months before being transferred to Bagram Air Force Base, then Guantánamo. In June 2011, his federal habeas judge found that Sharqawi had been subjected to "patent ... physical and psychological coercion" in Jordan and Kabul.

Sharqawi is part of a coordinated habeas petition filed in January 2018 on behalf of 11 detainees, which argues that the duration of their prolonged, indefinite detention violates the Due Process Clause and the 2001 Authorization for Use of Military Force. Sharqawi’s petition is still pending a decision in the D.C. district court.

Sharqawi Al Hajj is a 47-year-old citizen of Yemen who has been detained without charge at Guantánamo since 2004, after over two years in CIA sites. He faces the prospect of a death sentence in...
Memorandum Opinion in Al-Hajj v. Obama (June 8, 2011)
Newsweek: Will I Die at Guantanamo Bay? After 15 Years Without Charges, I Deserve Justice
My Client Has Spent More Than a Third of His Life Imprisoned in Guantánamo