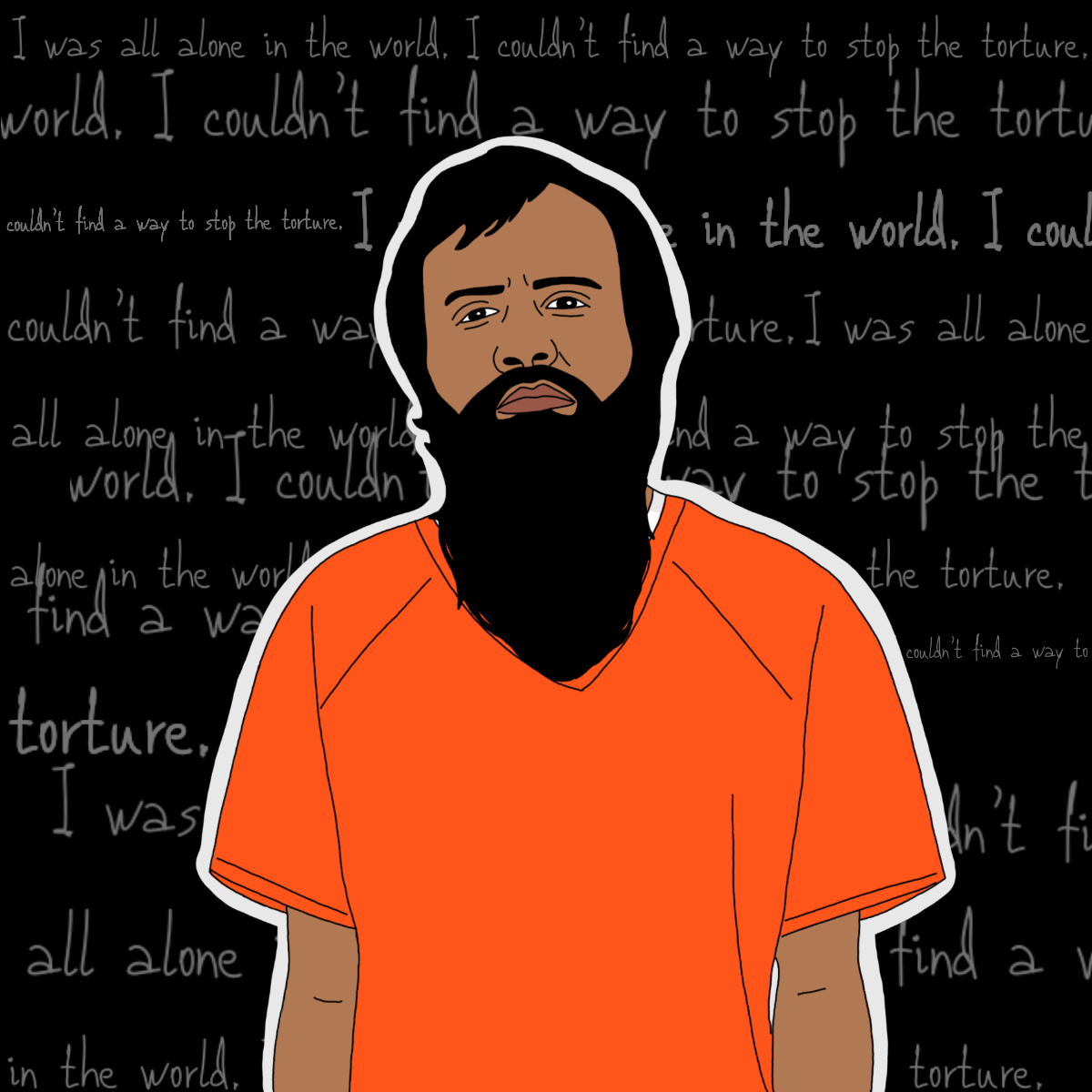 "Solitary confinement has destroyed me...It was like a huge mountain that was on top of me. And the pressure on me was so high it squeezed tears out of my eyes...I had no sense of [time] passing, no definition to mark it...I was all alone in the world. I couldn't find a way to stop the torture."- Mohammed al Qahtani

Mohammed Al Qahtani was detained without trial at the Guantánamo Bay prison for twenty years. He suffers from schizophrenia, diagnosed years before his detention, and major depression, and post-traumatic stress disorder (PTSD) stemming from his brutal torture in U.S. custody. Mohammed experiences a host of symptoms, including hallucinations, screaming, insomnia, crying for hours, banging his head against walls, impaired concentration and memory, hypervigilance, hopelessness, and physical pain throughout his body, among others.

He remains the only individual to be detained at Guantánamo whose abuse a senior U.S. government official admitted was "torture." Even though the U.S. government dropped all charges against Mohammed in 2008, it continued to detain him for an additional 13 years, without providing him with competent treatment of his mental illness, and without providing an end date for his detention. Mohammed's already fragile mental health began rapidly deteriorating by 2018. In February 2021, his legal team made public recent suicide attemps driven by schizophrenic hallucinations. He was repatriated to psychiatric care in Saudi Arabia on March 7, 2022.

Mohammed was born in Saudi Arabia in 1979 to a large family. His health problems began when he was in a car accident at age eight and was thrown from the car and suffered a traumatic brain injury. As a young adult, Mohammed struggled with major depression and mental illness. His family witnessed uncontrolled crying and an inability to deal with basic life functions. At one point the Riyadh police pulled him naked from a garbage dumpster he had thrown himself into. Later, in Mecca in May 2000, he was arrested by police after throwing himself half-naked into traffic and was confined to a psychiatric hospital where he was diagnosed with schizophrenia.

It is now known that the combined effect of Mohammed's mental illness and early brain injuries severely impaired his capacity for independent and voluntary decision-making, and likely left him profoundly susceptible to manipulation by others.

On December 15, 2001, Mohammed was detained by Pakistani security forces. Soon after, at only 22 years-old, he was turned over to U.S. officials, who subsequently transferred him to Guantánamo on February 12, 2002.

The U.S. government already knew that Mohammed was suffering from mental illness when the Department of Defense and the Federal Bureau of Investigation began to interrogate him shortly after his arrival at Guantánamo. In August 2002, he was placed in solitary confinement and held there for at least five months, completely isolated from other human beings. In those first few months at Guantánamo, the FBI observed him "talking to non-existent people, reporting hearing voices" and "crouching in a corner of the cell covered with a sheet for hours on end" even before military interrogators and psychiatrists implemented the torture plan that was designed to "break" Mohammed and "drive him crazy."

The torture Mohammed experienced exacerbated the hallucinations, suicidal thoughts, and depressive episodes caused by his pre-existing mental illnesses. It also caused him to develop post-traumatic stress disorder and experience flashbacks and suicidal thoughts. Mohammed's torture became widely known because interrogation logs were leaked to Time magazine in 2005. The documents detail his harrowing experience in U.S. custody, which included prolonged solitary confinement, sleep deprivation, physical violence, and grotesque sexual humiliation, along with other forms of psychological torture. His torture was also referenced years later in the Senate Armed Services Committee Report on the treatment of detainees in U.S. custody.

Mohammed remains the only person that the United States government has publicly conceded was tortured in U.S. custody. In an interview with The Washington Post, Susan Crawford of the Department of Defense and head of the military commissions at the time, admitted the following:

"We tortured Mohammed al-Qahtani.... His treatment met the legal definition of torture...The techniques they used were all authorized, but the manner in which they applied them was overly aggressive and too persistent ... You think of torture, you think of some horrendous physical act done to an individual. This was not any one particular act; this was just a combination of things that had a medical impact on him, that hurt his health. It was abusive and uncalled for. And coercive. Clearly coercive. It was that medical impact that pushed me over the edge."

In May 2008, Crawford directed the withdrawal of charges against Mohammed.

In January 2020, the United Nations Working Group on Arbitrary Detention issued an opinion calling on the United States to immediately release Mohammed, noting the "appalling level of physical and psychological torture" he has endured throughout his detention at Guantánamo. The Working Group noted that there was no legal basis for his detention and it had and continued to violate Mohammed's human rights. They called on the U.S. to also provide Mohammed with compensation or some other form of reparations for the harm he has suffered. To date, the U.S. has not issued a public response to the UN about this matter, despite being invited to do so.

Through Mohammed's federal habeas case, Dr. Emily Keram, a doctor with the U.S. Department of Veteran Affairs who is certified in psychiatry, neurology, and forensic psychiatry, was appointed by the court to conduct an independent psychiatric evaluation. After a series of visits beginning in 2015, she confirmed his diagnosis of schizophrenia and major depression, now combined with post-traumatic stress disorder (PTSD) caused by his torture and abuse in confinement. The public release of Dr. Keram's report in 2016 was a turning point in Mohammed's case. She confirmed what his family, lawyers, and the U.S. authorities had long known, and, notably, she documented why his schizophrenia, an uncurable illness, required the kind of treatment and care that he could not receive at the prison.

The systematic torture that Mohammed survived at Guantánamo left him unable to trust American military doctors; one of the psychiatrists who helped design his torture program has been publicly reported as having been in the room during his interrogations under torture. The interrogation tactics employed by the U.S. government would have profoundly traumatized even a person who was not already suffering from mental illness. For Mohammed, who has endured a lifetime of mental health problems, it was devastating. According to Dr. Keram, Mohammed's "pre-existing psychotic, mood, and cognitive disorders made him particularly vulnerable to [...] the conditions of confinement and interrogation. The government's treatment of Mohammed capitalized on this vulnerability and has led him to feel "profoundly isolated, hopeless, and helpless."

Given the complicity of the medical professionals in his torture and the routine cycling of staff at Guantánamo, Mohammed was not able to build enough trust for effective treatment while he remained detained. Dr. Keram believes that he needs to be treated by Saudi doctors who understand his culture and speak Arabic; that any recovery from PTSD could take place at Guantánamo, where he was tortured; and that successful treatment for his schizophrenia, which will be life-long, requires the involvement and support of Mohammed's family. All these factors argued strongly for his repatriation to psychiatric care in Saudi Arabia.

Building on Dr. Keram's findings, Mohammed's legal team at the Center for Constitutional Rights, CUNY Law School, and Cornell Law School advocated for a Mixed Medical Commission to evaluate him. Mixed Medical Commissions are allowed under Army Regulation 190-8 and are intended as a means of evaluating the medical needs of prisoners of war to see whether their medical condition entitles them to repatriation. Army regulations provide that the commission must include experts from neutral countries to conduct the evaluation. Once the commission has completed its evaluation, the United States must implement its recommendations within three months.

On March 6, 2020, a federal judge agreed that Mohammed was entitled to an evaluation by a Mixed Medical Commission and ordered the government to provide it. The government sought to reverse the judge's decision, but the D.C. Circuit Court of Appeals dismissed the government's appeal, concluding that the case can move forward. In September 2020, more than a dozen human rights, civil liberties, and faith groups sent a letter to DOD and DOJ urging that the government immediately take steps to implement the Mixed Medical Commission. However, on January 11, 2021, the Department of Justice filed a motion asking the district court to vacate Judge Collyer's March 6, 2020 order, citing to a last-minute Trump administration memorandum purporting to make an exception excluding men imprisoned at Guantánamo from Army Reg. 190-8. The parties were still briefing the motion when the court dismissed the case in the wake of transfer.

On March 22, 2021, a coalition of human rights, civil liberties, and faith groups – joined by torture treatment programs from across the country – sent a letter to the Secretary of Defense and the Acting Army Secretary urging the Biden administration to rescind the January 11 memo and take the necessary steps to convene a Mixed Medical Commission or repatriate Mohammed to psychiatric care in Saudi Arabia. On March 7, 2022, he was repatriated.