Pardiss Kebriaei is a Senior Staff Attorney at the Center for Constitutional Rights, where she works on challenging U.S. government abuses in the national security context. She was lead counsel for CCR in Al-Aulaqi v. Panetta, which challenged the killings of three American citizens in U.S. drone strikes in Yemen, and Al-Aulaqi v. Obama, which challenged the authorization for the targeting of an American citizen added to secret government “kill lists.” She represents current and former Guantanamo detainees, including Ghaleb Al-Bihani, a Yemeni man cleared for release through the government’s Periodic Review Board process after having been designated as a “forever” detainee, but who remains detained without charge, and another Yememi client who, in 2009, was in the last group of detainees to be repatriated to Yemen. She represents the families of two detainees who died in Guantanamo in 2006, whose reported “suicides” have been thrown into doubt by whistleblowers and investigative journalists, in the cases Al-Zahrani v. United States in the Inter-American Commission on Human Rights, and, previously, in Al-Zahrani v. Rumsfeld in U.S. federal courts. She represents Fahad Hashmi, who pled to charges of material support for terrorism after three years in pre-trial solitary confinement and Special Administrative Measures (SAMs) and was subsequently held in the Administrative Maximum prison in Colorado, the nation’s federal “supermax” prison. She advocates on behalf of other cases as part of the No Separate Justice Campaign, a grassroots initiative formed to shed light on unjust domestic terrorism prosecutions. Prior to coming to the Center for Constitutional Rights she worked at the Center for Reproductive Rights. She has also taught courses at Hunter and Brooklyn Colleges of the City University of New York. She graduated from Northwestern University and the University of Pennsylvania Law School.

Her recent writing includes "Life After Guantanamo," Harper's Magazine, April 2015; "The Torture that Flourishes from Gitmo to an American Supermax," The Nation, Janunary 2014;  on the hunger strike at Gitmo, “We are dying a slow death here,” MSNBC, April 13, 2013; and "U.S. Targeted Killing Policy: A Response to Jeh Johnson," Yale Law & Policy Review, 2013. She has appeared on many outlets, including PBS News Hour, CBS Evening News, Democracy Now! and MSNBC.

Why is Guantánamo Bay still open? 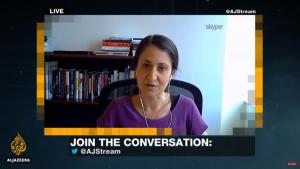 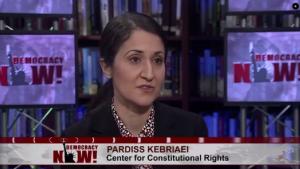 Trump Leads GOP Charge Embracing Torture: "I'd Bring Back a Hell of a Lot Worse Than Waterboarding" 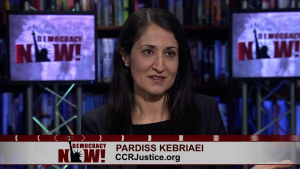 In the final debate before Tuesday’s primary in New Hampshire, Republican presidential contenders battled it out...

A Family Broken Up: Freed After 8 Years at Guantánamo, a Father & Son Are Still Kept Apart 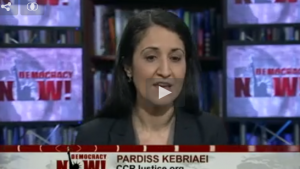 We look at the extraordinary story from Guantánamo of a father and son who were held for many years and what became of...

END_OF_DOCUMENT_TOKEN_TO_BE_REPLACED

I represent one of the last remaining detainees in Guantánamo, Sharqawi Al Hajj, a 43-year-old man from Yemen whom the United States has been holding without charge for over 15 years and plans to keep in Guantánamo indefinitely. Recently he gave me a small arts-and-crafts tree that he made in...

This week, CCR made an emergency request in the district court in Washington, DC, for an independent medical evaluation of Sharqawi Al Hajj , a 43-year-old citizen of Yemen who remains detained at Guantánamo, where men have been tortured, attempted suicide, attempted starvation, become numb, become...

As President Obama’s terms in office come to an end, eight years after he entered office he has yet to deliver on one of his most prominent campaign promises: to close the prison at Guantánamo Bay. He is now poised to leave it to the next administration. Though the prison was opened under President...

Why a Guantanamo Detainee Would Refuse a Chance to Leave

Earlier this year, a man named Mohammed Bawazir, one of dozens of remaining Guantanamo detainees whom the Obama administration has cleared for release and is working to transfer, rejected an offer of resettlement in a third country. The 34-year-old Yemeni has been detained without charge for over...
END_OF_DOCUMENT_TOKEN_TO_BE_REPLACED