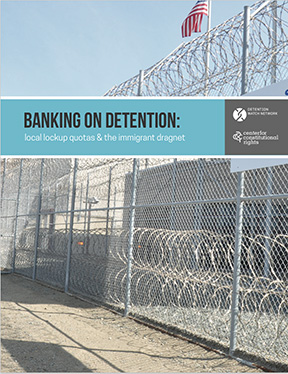 Banking on Detention: Local Lockup Quotas and the Immigration Dragnet (2015) explores and exposes the depth of local lockup quotas in immigrant detention across 15 facilities in half of Immigration and Customs Enforcement's (ICR) field offices under the Obama administration. Major areas with local quotas include: Los Angeles, San Antonio, Phoenix, Miami, Seattle, Houston, San Diego, Buffalo, New Orleans, and Newark. The report draws on data obtained from a Freedom of Information Act (FOIA) request and subsequent litigation filed by Detention Watch Network (DWN) and the Center for Constitutional Rights, along with the Seton Hall Law Clinic.

Through FOIA, DWN and CCR requested information and documents pertaining to the so-called "detention bed quota," the decision-making surrounding the quota, and its impact on detention policy and detention contracting decisions. Not only did the information we received helped advocates and congressional representatives during the Obama administration push for ending the Congressional bed quota, but documents revealed to the public the local lock-up quotas that have become pervasive in both privately and publicly-run immigrant detention.

In 2016, DWN and CCR published an updated report, which included more information obtained through FOIA about the local lockup quotas.

Top lines from the report: