The Center for Constitutional Rights is excited to partner with the Film Forum on the September 19th screening of MIDNIGHT TRAVELER, one family's extraordinary story of migration and borders filmed on mobile phones. Center for Constitutional Rights Advocacy Director Nadia Ben-Youssef will join Writer/Editor/Producer Emelie Mahdavian and Producer Su Kim for a discussion and Q&A after the 7:50 p.m. screening.

You can purchase tickets on the Film Forum website and use special code CCRJ for discounted tickets for this or any of the screenings. MIDNIGHT TRAVELER runs from September 18th through October 1st. 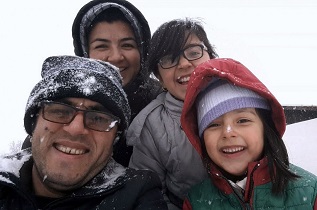 “A documentary that feels like a modern-day message in a bottle, an urgent appeal for help from a family that’s still searching for a home.” (Scott Tobias, Variety)

In 2015, the Taliban in Afghanistan call for the death of Hassan Fazili, a filmmaker who, with his wife, runs Kabul’s Art Café, a progressive meeting place. The couple and their two young daughters begin a harrowing 3500-mile, 3-year “journey to the edge of Hell,” across Iran, Turkey, Greece, Bulgaria, and Serbia – ultimately arriving in Hungary. Utilizing only mobile phone cameras, they tell an extraordinary story of ordinary people caught between terror and the inhumanity of Kafkaesque bureaucracies.