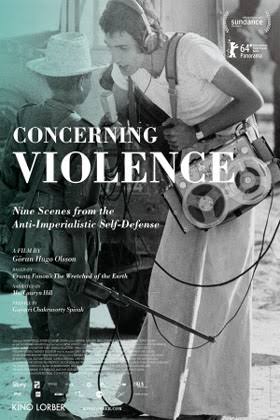 The Bertha Justice Institute at the Center for Constitutional Rights (CCR), in partnership with US Human Rights Network (USHRN), is proud to invite you to a free screening of the July Freedom Flicks selection, Sundance award-winning documentary Concerning Violence . This special screening comes the night before CCR’s Law4BlackLives conference, a national gathering of lawyers, law students, legal workers, and jailhouse lawyers who are committed to building a world in which #BlackLivesMatter.

Chronicling 9 scenes from Africa’s anti-imperialist movements in the 1950s and 1960s, Concerning Violence is based on Frantz Fanon’s enduring essay of the same title from his seminal 1961 publication, The Wretched of the Earth.

Narrated by Lauryn Hill, Concerning Violence is a prescient documentary in light of recent events in Ferguson, Baltimore, New York, and countless other struggles for liberation. It insists we think critically about the change that we want to see and how to achieve it in the face of systemic racism, patriarchy, and myriad other forms of oppression.

We will have the honor of being joined by Mireille Fanon Mendès-France, Chief Rapporteur of the UN Working Group on People of African Descent, Executive Director of USHRN Ejim Dike, and others, for a short conversation after the film.