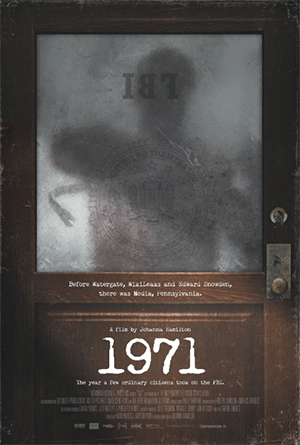 Before Edward Snowden, before WikiLeaks, and before Watergate, there was The Citizens’ Commission to Investigate the FBI. Join us, on March 31, for a free screening of 1971, an engrossing documentary that tells the story of a band of Citizens’ Commission members who, in 1971, broke into a small FBI office in Media, Pennsylvania.

The documents they retrieved and subsequently leaked to the media would reveal the FBI’s illegal surveillance of U.S. citizens and its COINTELPRO program, which led to the first-ever Congressional investigation into American intelligence agencies.

After the screening, we will be joined by Betty Medsger who, in March 1971, was a reporter for the The Washington Post and wrote the first stories about the Media break-in revelations. She is the author of The Burglary: The Discovery of J. Edgar Hoover's Secret FBI. We will also be joined by CCR board member and senior community organizer at the NAACP LDF, Lumumba Akinwole-Bandele.