A federal judge dismissed a lawsuit filed by the Jewish National Fund (JNF) and others against a U.S.-based Palestinian rights organization. The JNF had accused the US Campaign for Palestinian Rights (USCPR) of engaging in “material support for terrorism,” citing their speech and expressive activity, including their support for the Palestinian Boycott, Divestment and Sanctions movement. The JNF—a quasi-state institution in Israel that acquires and administers land for the sole benefit of the Jewish people—also wanted to hold the USCPR liable for their participation in the “Stop the JNF” campaign, an advocacy initiative that sought to highlight the JNF’s own unlawful and discriminatory practices.

In an opinion, the court characterized the plaintiffs’ arguments as, “to say the least, not persuasive.”

A series of attacks on cis/trans women and non-binary people during this year’s Women’s History Month have laid bare how prevalent and deadly misogyny and cisheteropatriarchy remain, particularly for those who are marginalized due to racism, transphobia, xenophobia, and whorephobia—those who are most often left out of the “girlboss” and “lean in” culture of many Women’s History Month celebrations. We’re reaffirming our commitment to a broad-based vision of gender self-determination and name the principles that guide how we approach dismantling cisheteropatriarchy.

Biden's repeal of Trump-era ICC sanctions are welcome but overdue

On Friday, the Biden administration revoked a Trump-era Executive Order and sanctions against International Criminal Court (ICC) Prosecutor Fatou Bensouda and senior aide Phakiso Mochochoko. Trump’s sanctions set a dangerous precedent for attacks on victims, lawyers, human rights advocates, and courts, and Biden’s repeal is a welcome – but overdue – step toward curtailing U.S. obstruction of accountability at the ICC for the most serious crimes. Prosecutor Bensouda righty moved to open an investigation into war crimes and crimes against humanity in Palestine and Afghanistan, including of U.S. torture, because grave and widespread crimes against civilians in both situations had gone unpunished. Both the United States and Israel had the opportunity to investigate and hold their own citizens accountable for international crimes – and failed to do so. Victims have the right to turn to the ICC as a court of last resort to end impunity. These investigations must now proceed expeditiously. 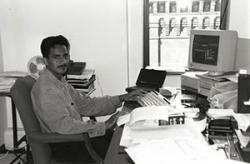 Photo: IT manager Orlando Gudino in 1997.

The Center for Constitutional Rights wants to congratulate Orlando Gudino, our IT Manager, for celebrating his 25th anniversary at the organization! When Orlando started at CCR, there were less than 20 staff members. So much has changed over the years, but one constant has been Orlando's kind and patient presence. Thank you, O, for all that you have done for and given to the organization and staff throughout the years!