A federal court has again blocked a Trump administration ban that categorically denied asylum to anyone at the southern border who had transited through a third country en route to the United States, with very limited exceptions.

WIN! Second Circuit affirms that NYPD misconduct and disciplinary records must be disclosed

On Tuesday, the Second Circuit Court of Appeals denied the New York City police unions’ (along with corrections officer and firefighter unions’) attempt to stop the City of New York from releasing officer misconduct and discipline records to the public, following the June 2020 repeal by the New York State Legislature of the police secrecy law 50-a.

“Police unions have been trying to undermine and overturn the legislature and the public will that led to the repeal of 50-a because they want to preserve police impunity and shield abusive officers from consequences. The decision from the Second Circuit affirms that the public has the right to know when police brutalize or sexually harass New Yorkers and escape discipline, in spite of police unions’ baseless claims and fear mongering,” said Joo-Hyun Kang, Director of Communities United for Police Reform.

On Wednesday, we joined more than 75 organizations calling for the Biden administration to repeal the Trump-era Executive Order that imposed sanctions on the International Criminal Court (ICC) Prosecutor, which threatens civil and criminal penalties against advocates supporting ICC investigations. The letter reads:

There is an immediate need to act to reset U.S. policy regarding the ICC. Most urgently, we are alarmed by recent calls for the U.S. government to maintain or even expand the sanctions put into place by the Trump administration in June 2020 currently targeting the court’s work.

These actions were an unprecedented attack on the court’s mandate to deliver justice and the rule of law globally, an abuse of the U.S. government’s financial powers, and a betrayal of the U.S. legacy in establishing institutions of international justice. They were also an attack on those who engage with the court, including human rights defenders and victims. These extraordinary measures have put the U.S. at odds with many of its closest allies. They also have been challenged on constitutional grounds domestically.

Keeping in place the executive order authorizing sanctions would be inconsistent with the new administration’s laudable commitments to respecting the rule of law and pursuing multilateral cooperation in support of U.S. interests. It would also transform a shameful but temporary action into a standing license for other governments to attack multilateral institutions when they disagree with those bodies’ actions.

Continue reading the letter on our website. Learn more about our work at the ICC in support of Palestinian victims and victims of U.S. torture in the so-called “war on terror.”

The Black Arts Movement had its symbolic beginnings when poet LeRoi Jones, later known as Imamu Amiri Baraka, founded the Black Arts Repertory Theater in Harlem, which housed workshops, poetry, playwriting, music, and painting. Politically motivated artists, including poets, musicians, and writers, were calling for the creation of art that would reflect pride in Black history and elevate the beauty of Black identity. “The Black Arts Movement stands as the single most controversial moment in the history of African American literature,” read a Time Magazine editorial decades later.

Continue reading the piece from week 4 of this series on our website.

In our weekly Creating Black Futures series, another piece of our weekly Black History Month 2021 programming, we are highlighting partners and organizations doing movement work today to create a better tomorrow. We invite you all to continue to educate yourselves around the issues confronting Black communities and to contribute to the leaders who are working to create solutions. This week our call to action is to begin to learn, understand, and celebrate the importance of the protest songs of the 1960’s and 1970’s:

The Civil Rights Movement had a soundtrack. Fifty years later, the tracks are familiar to us all. It wasn’t just movie stars and other entertainers embedded in the marches and funerals who sang and contributed songs. Regular folks, the activists, the students, the preachers, and all the other protestors used music to raise their collective voice against white supremacy and the racial injustice that was keeping the United States stalled in the Jim Crow era.

Read more and listen to the soundtrack on our website.

First, this month we are elevating the powerful history of agendas for Black liberation within the U.S. and globally, through art, dialogue, and uplifting our movement partners. Join us for an exciting two-day live art event in celebration of art, expressions, and creations advancing Black liberation.

On February 25 and 26, from 3-6 p.m., the Center for Constitutional Rights’ Instagram will be taken over with live performances.

Head to our website to see the full line up!

To access the screening, visit the Kino Marquee website. Register for a Kino Marquee account (or login if you already have one). Click the blue "Redeem Pass" button then enter CCR28NT. Note: this code can only be used once per customer and must be redeemed by February 26, 2021. You will have seven days to watch the film from the time you redeem it. Viewings are limited. Be sure to redeem your code now!

For more information about this screening, visit our designated event page. Learn more about our upcoming events on our website.

TODAY: Join us for "The Unchecked Growth of Presidential Power" 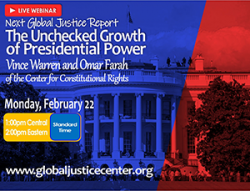 Over the last four years there has been a growing concern about the unrestrained power of President Trump. That was a factor in 81 million people voting against him last November. He was able to make frequently impulsive decisions with no one in the White House or even Congress or the courts able to hold him to account. The fear was that he was becoming a monarch who believed he was entitled to continue to rule even beyond his four-year term.

As threatening as this was to democracy, it was a bizarre extension of a tendency in the U.S. presidency that has been building for over 70 years. The Cold War fostered a political context where increasing authority was given to the President. This was particularly so in the area of foreign affairs, leading some to worry about an Imperial Presidency. But it also frequently applied to domestic matters. When there is a feeling of insecurity, many seek comfort in authoritarian leaders.

Join the event on Zoom.