In response to a decision issued by the Pre-Trial Chamber of the International Criminal Court last week, recognizing that the territory of the State of Palestine — Gaza and the West Bank including East Jerusalem — falls within Court’s jurisdiction for investigation, we issued the following statement Friday:

We applaud today’s decision, in particular its recognition of the Palestinian people’s right to self-determination and its rejection of the idea that cases with “political consequences” are somehow beyond the reach of judicial scrutiny.  In the wake of attempts by the Trump administration to intimidate and punish the ICC prosecutor for moving to open an investigation into Israeli war crimes and crimes against humanity, today’s decision is a powerful and necessary assertion of the rule of law. The ICC’s decision is a testament to the decades-long principled and tireless efforts by Palestinian advocates, often at personal risk and under difficult circumstancces, to break the cycle of impunity for crimes committed against Palestinian civilians. Today marks an important step in a broader human rights struggle towards justice for Palestine.

On Tuesday, more than 100 non-governmental organizations joined a letter led by the Center for Constitutional Rights and the Center for Victims of Torture, urging President Joe Biden to close the prison at Guantánamo Bay, Cuba and end indefinite military detention.

The letter emphasizes the devastating and ongoing consequences of the prison, including the effect of a post-9/11 national security framework on domestic racial justice struggles and efforts to end police violence. The letter reads, in part:

“Guantánamo embodies the fact that, for nearly two decades following the September 11, 2001 attacks, the United States government has viewed communities of color – citizens and non-citizens alike – through a security threat lens, to devastating consequences. This is not a problem of the past. Guantánamo continues to cause escalating and profound damage to the men who still languish there, and the approach it exemplifies continues to fuel and justify bigotry, stereotyping, and stigma. Guantánamo entrenches racial divisions and racism more broadly, and risks facilitating additional rights violations.”

For more information, and to read the letter to the Biden administration, go to our website.

Hundreds of migrants die every year in the unforgiving terrain in and around the greater-Sonoran desert, on the U.S. side of the border, while crossing into the United States in search of safe haven; some estimates reach into the thousands.

No More Deaths and the Center for Constitutional Rights filed a Freedom of Information Act lawsuit against Customs and Border Protection (CBP). The lawsuit filed Wednesday seeks information regarding CBP policies and practices that advocates say are fueling the missing persons crisis at the border. The lawsuit seeks documents on policies, procedures, and protocols that attorneys say are crucial to understanding the causes and effects of the crisis.

“For years, Border Patrol has acted without any transparency about their supposed rescue operations,” said No More Deaths Abuse Documentation Coordinator Parker Deighan. “Meanwhile, families and advocates searching for missing people have experienced Border Patrol’s hostility and refusal to help.” 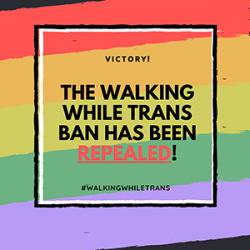 Since 1976, police officers across New York State have used P.L. 240.37 — a discriminatory, anti-loitering statute that purports to ban “loitering for the purposes of prostitution” — to unfairly target and harass Back and Brown women simply for existing in public spaces. Since its inception, this law, which has been dubbed the “Walking While Trans Ban” and “Stop & Frisk 2.0” because it has disproprotionately been used to target and criminalize transgender people, has allowed officers to profile, stop and frisk, and even jail people without any compelling evidence, for as little as wearing a short skirt or hailing a taxi.

On February 2, after years of hard-fought advocacy spearheaded by Black trans women and trans communities of color, Governor Andrew Cuomo signed a repeal into law. “By repealing the Walking While Trans Ban, our Black and Latinx trans siblings across New York State will stop living in perpetual fear of being unlawfully stopped and frisked,” said Senior Staff Attorney Chinyere Ezie. “This win is for the late Marsha P. Johnson, Sylvia Rivera, Layleen Polanco, Lorena Borjas, and all trans people who have been harassed and violated by the police for simply living as their authentic selves.”

To honor Black history is to celebrate Black futures. In our weekly call to action, we will highlight different partners and organizations who are doing movement work today to create a better tomorrow. We invite you all to continue to educate yourselves around the issues confronting Black communities and to contribute to the leaders who are working to create solutions. This week, we are centering the movement to see the BREATHE Act adopted nationwide.

The BREATHE Act is a comprehensive proposal to divest resources from law enforcement and mass incarceration and invest them in an inspiring model of community safety. With four main goals — divest federal resources from prisons and policing; invest in other forms of community safety; allocate funds to building healthy, sustainable, and equitable communities; and hold law enforcement officials accountable—the BREATHE Act heeds calls to radically reimagine our ideas of justice and safety. The Act seeks to eliminate the ability of law enforcement to commit violence against and otherwise harm Black and Brown people with impunity.

The first argument begins at 9:30 a.m. EST, and Scott will be the seventh case to be argued. This will be a telephonic argument, and the audio will stream live on the court’s YouTube channel.

Scott v. Pennsylvania Board of Probation and Parole was filed on behalf of six individuals serving mandatory sentences of Death By Incarceration, also known as life without the possibility of parole in the criminal legal system, for “felony murder,” or crimes in which they did not take or did not intend to take a life. This lawsuit builds off of years of organizing and advocacy by activists, organizers, and lawyers at the Abolitionist Law Center (ALC), Amistad Law Project (ALP), and the Coalition to Abolish Death By Incarceration (CADBI).

This case was recently covered by NPR’s Morning Edition. Listen to and read their reporting on NPR’s website. Learn more about the oral argument on our website.