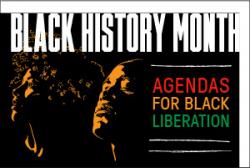 We are launching our celebration of Black History Month today and will update you with events and actions throughout the month. We begin with a reflection on “the radical imaginings of our ancestors.”

To honor Black history is to celebrate Black futures and the radical imaginings of our ancestors. Generations of Black freedom fighters have put forward liberatory political, social, and economic platforms, and Black artists have charted a future where Black people live abundant, healthy, safe, and joy-filled lives. Black History Month is an opportunity to study and uplift the work of the Black organizers, cultural workers, and militants who make a transformed world irresistible.

Our political commitment – which has grounded and guided the Center for Constitutional Rights for 55 years – is to center the future vision of Black communities and to protect the ability of movements for justice to realize their freedom dreams. This month, we invite reflection on the political values and the guiding principles behind historic and contemporary Agendas for Black Liberation that have informed our relationships, our analysis, and our practice.

Policing: Virtual Forum on Community Safety for Youth by Youth 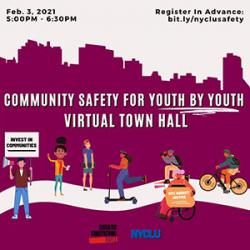 Please register on Zoom for the virtual event.

Communities United for Police Reform (CPR) members and partners are hosting a series of virtual town halls and other events called “Redefining Community Safety,” to engage the public and communities most harmed by the NYPD and create a real plan for change in New York City. After the town halls, CPR will incorporate findings from the Redefining Community Safety series into a report to present to the public and the New York City Council.

Brick by Brick: ICYMI, watch our community event on Death By Incarceration

“Serving a Death By Incarceration [sentence] was the worst thing to ever happen to me in my life. I felt like my country just threw me away.”

Last Tuesday, Cynthia Alvarado was just one of the incredible speakers who joined us and our partners, Abolitionist Law Center, Amistad Law Project, and the Coalition to End Death By Incarceration, for a powerful event, “Brick by Brick: A community forum on ending Death By Incarceration in Pennsylvania.”

We recorded the event so you can still watch!

It’s a space to hear personal experiences with Death By Incarceration (DBI, commonly known as life without the possibility of parole) from formerly incarcerated people and family members of people currently serving these sentences. Advocates and lawyers share an overview of Death By Incarceration in the state, organizing efforts to abolish harsh sentencing practices, and an update on the lawsuit, Scott v. Pennsylvania Board of Probation and Parole, which will be argued before the court February 8. The case is the first of its kind to argue that Pennsylvania’s imposition of DBI sentences for felony murder is unconstitutional because it is a cruel, disproportionate punishment.

'The Activist Files' podcast: Criminalization Black Protest -- When We Resist

Throughout its history, law enforcement has deemed Black activism a national security threat. Law enforcement has used its powers to chill the speech and movements of Black activists and activism that’s done on behalf of issues that impact Black communities. In Criminalizing Black protest: When we resist, the 34th episode of “The Activist Files,” two activists working to bring attention to the environmental racism in St. James Parish, Louisiana, which is a historic Black community under threat of destruction by Formosa Plastics, share their stories of how police criminalized their activism.

Anne Rolfes, director of the Louisiana Bucket Brigade, was arrested, charged with terrorism, and faced up to 15 years in prison. Pastor Gregory Manning, head of Broadmoor Community Church and a member of the Coalition Against Death Alley was arrested, charged with a felony for allegedly inciting a riot, and faced six months to 21 years in prison. They share the details of what led to their arrests. Pam Spees, a senior staff attorney at the Center for Constitutional Rights, provides information on the trends she’s seeing in laws that are increasingly criminalizing activists and how activists can stay safe in movement spaces.