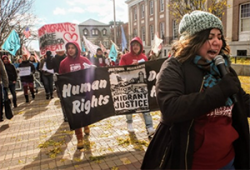 In a settlement to a major federal lawsuit, Immigration and Customs Enforcement (ICE) has agreed not to deport the immigrant activists who sued the agency after suffering retaliatory arrests, and to instruct officers not to target people “for exercising First Amendment rights.” Immigrant farmworkers with Vermont-based human rights organization Migrant Justice led a march to Burlington’s federal courthouse to claim victory and file the settlement in Migrant Justice v. Wolf.

“With this settlement, we have shown that we won’t back down in the face of ICE’s abuses. They have tried to silence us by terrorizing our community and targeting our leaders, but we are here today to say that we will not be silenced,” said Victor Diaz, a Migrant Justice leader and plaintiff.

Plaintiffs were represented in the lawsuit by the ACLU of Vermont, the Center for Constitutional Rights, the National Center for Law and Economic Justice, the National Immigration Law Center, and Gibson, Dunn & Crutcher LLP.

Toolkit for the movement -- standing with frontline communities 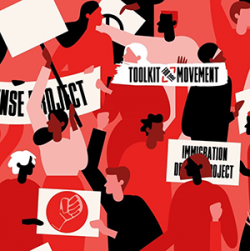 For us, our communities, and movement partners on the frontlines, 2020 has been a year of converging and overlapping pandemics — one novel and new, others, centuries old. The impact of COVID-19, systemic anti-Black racism, and authoritarian repression have disproportionately harmed our people: those who survive at the margins, and those whose existence and resistance threatens the intolerable status quo.

On Wednesday, we launched Toolkit for the Movement, a collection of resources to support and protect our communities.

The resource contains: the newly-updated If An Agent Knocks, offering information and advice for individuals targeted by the FBI or other federal agents; FOIA Basics for Activists, updated with a case study and annotated FOIA requests, which breaks down how to use the Freedom of Information Act (FOIA), a tool that anyone can use to expose government and corporate actions and equip themselves with the information they need to organize; and, together with Immigrant Defense Project, an updated version of our Defend Against ICE Raids and Community Arrests Toolkit to resist the criminalization, deportation, family separation and much more.

You can find the full toolkit on our website.

We also released episode 31 of “The Activist Files,” a discussion between Staff Attorney Angelo Guisado and Senior Legal Worker Ian Head on our resources Combatting White Supremacist Organizing: Tools to Protect Our Communities from Violence, a toolkit for opposing, managing, and healing from white supremacist activity before, during, and after it comes to town and If An Agent Knocks, riginally published in 1989, it has been updated for these increasingly authoritarian times.

Listen to the latest episode of “The Activist Files” on our website.

Cameroonians are at risk of deportation 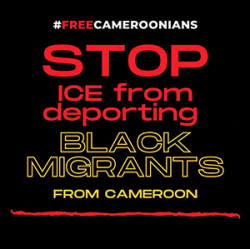 Along with the Leadership Conference on Civil and Human Rights and 79 other civil rights groups, we urged Donald Trump and Acting Homeland Security Secretary Wolf to immediately provide the maximum protection possible through a Deferred Enforced Departure (DED) or Temporary Protected Status (TPS) designation for Cameroonians. The move is necessary to ensure that the United States does not return anyone to a country, like Cameroon, that has become temporarily unsafe for its residents.

The groups called on Trump and Wolf to honor the foundational American values of offering safety and security to those in need by granting the designation right away. With Cameroon rapidly descending into multiple crises with devastating human consequences, it is imperative that the United States ensure nationals and those who habitually last resided in Cameroon are able to remain here.

WATCH: "The Moments Leading Up to the Infamous Photo Op"

On June 1, at the height of the Black Lives Matter protests following the police killings of George Floyd and Breonna Taylor, Donald Trump deployed a militarized national guard to violently clear the streets of demonstrators peacefully gathering in Lafayette Square outside of the White House. What ensued was 39 minutes of chaos and confusion as officers used tear gas, rubber bullets, smoke canisters, flash grenades, and riot tactics to clear a path for Trump to walk through the square to St. John's Episcopal Church for a photo op holding a Bible. St. John’s Episcopal Church had been damaged by fire the previous night. Just moments before the photo op, Trump had called upon governors to "dominate the streets" and threatened to send military forces to “solve the problem.”

A new documentary film “Photo Op” delivers an urgent blow-by-blow account of Trump's June 1 photo op, and the decisions that led to the unprecedented use of force on Black Lives Matter protesters on Lafayette Square in front of the White House. The film interweaves powerful interviews — including an exclusive interview with a whistleblower from the National Guard who was on duty that day — visceral images taken by protesters and never before heard audio of police commands during the operation. The hour-long documentary features our executive director Vince Warren.