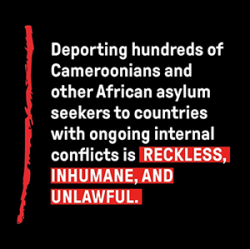 For the second time in under a month, U.S. Immigration and Customs Enforcement (ICE) and the Department of Homeland Security (DHS) are planning to deport a group of Cameroonian asylum seekers back into an active war zone where they face imminent persecution and death. This targeted mass deportation comes after 60 Cameroonian and 28 Congolese asylum seekers were secretly and forcibly deported from the U.S. to their respective countries on October 13, 2020, many having been tortured into signing their deportation papers while in ICE detention.

Even as the Trump administration has consistently demonstrated its racist antipathy to African and other Black migrants, in recent months we have witnessed a dramatic escalation of its anti-immigrant policies with the deportation of hundreds of Cameroonians and other African asylum seekers to countries with ongoing internal conflicts. Human rights organizations have documented a harrowing, violent, and escalating conflict in Cameroon and a culture of impunity that promotes persecution and killing that extends to those who had sought refuge in the U.S. under international law.

These mass deportations are reckless, inhumane—and unlawful. Under international law, the United States is bound by the fundamental principle of non-refoulement, which prohibits a country from returning or expelling an individual to a country where they have a well-founded fear of persecution and/or torture. The deportations also appear to target Cameroonians, in part because they have consistently resisted — through litigation, hunger strikes, and public protest — the harsh and unjust confinement in immigration detention.

ICYMI: Working at the Center for Constitutional Rights panel discussion

In case you missed it, the full panel can be found on Zoom. Use the code “CCRBLSA2020!” to access the recording.

WATCH: Demands from the People: Grassroots Reflections after the 2020 Presidential Election

The day after the presidential election, we hosted an intimate roundtable with frontline human rights defenders, impacted people, and public intellectuals to reflect on our current political moment and to invite international vigilance and solidarity. Demands from the People: Grassroots Reflections after the 2020 Presidential Election was hosted in partnership with the US Human Rights Network and the Hawai'i Institute for Human Rights, and addressed UN Member States in connection with last week’s Universal Periodic Review of the United States.

The recording of the briefing can be accessed on our YouTube page, and a full transcript of the conversation can be found on Google Drive.