Last week, Mijente, the Immigrant Defense Project (IDP), CUNY Law School’s Human Rights and Gender Justice Clinic (HRGJ), and the Center for Constitutional Rights filed a Freedom of Information Act (FOIA) request to demand information on contracts between Immigration and Customs Enforcement (ICE) and the Department of Homeland Security (DHS) and commercial information technology and data service providers RELX Group and Thomson Reuters. The request follows documentation and reporting on the role of the “data broker firms” in providing information that is used by U.S. government agencies in immigration enforcement operations.

“As we have seen in our years of tracking ICE raids, ICE relies heavily on secrecy and manipulation to enact its harmful deportation agenda,” said Mizue Aizeki, Deputy Director of the Immigrant Defense Project. “As millions and millions of tax dollars continue to enrich tech corporations’ growing role in ICE operations, we must uncover the details of these hidden deals.”

In response to Thursday’s ruling by a panel of the Second Circuit Court of Appeals temporarily blocking New York City’s publication of NYPD officer disciplinary records, Communities United for Police Reform, the Center for Constitutional Rights, and the law firm of Orrick, Herrington & Sutcliffe LLP issued the following statement:

The ruling is very narrow, and very temporary: it blocks publication only during the appeal of the district court order that publication may proceed while the lawsuit is pending. While we are disappointed by further delay in the publication of these records, the ruling is no indication that the underlying order allowing publication was incorrect. We are confident that, on the merits, the appeals court will agree that public access to officer disciplinary records through the City’s plan to publish searchable databases is long overdue.

On the Blog: Allegations of Forced Sterilization in ICE Detention Evoke a Long Legacy of Eugenics in the United States

Following the revelations brought to light by whistleblower Dawn Wooten of inhumane living conditions, a lack of protections against COVID-19, extreme medical abuses, and coerced sterilization practices in the privately-owned ICE detention center in Irving County Georgia, Advocacy Associate maya finoh writes in their latest for the blog:

Forced sterilization, considered a form of torture by the United Nations, is just one way in which governments have weaponized reproduction to subjugate communities that are considered undesirable and expendable in a nation. As European colonialism swept across the Global South, a logic of genocide and population control was used to stifle insurrection and set in motion the white supremacist subjugation of Black, Indigenous, and Brown people. In the United States, the present-day context of forced sterilization reached its peak in the eugenics movement that gained immense popularity in the early 1900s. From 1907 until the late 1970s, state governments intentionally engaged in a practice of sterilization to “prevent anyone with undesirable traits—disabilities, poverty, a criminal record, specific racial backgrounds—from procreating.”

Join us to listen to our Supreme Court case Tanzin v. Tanvir 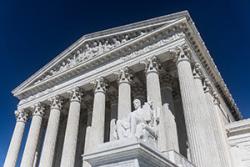 Join the Center for Constitutional Rights, CLEAR, and the law firm of Debevoise & Plimpton for Supreme Court argument in our case, Tanzin v. Tanvir. CUNY School of Law Professor Ramzi Kassem will argue.

The first argument begins at 10:00 a.m., and Tanzin v. Tanvir will follow. This will be a telephonic argument with a live audio link.

This case was filed on behalf American Muslim men who were placed or kept on the No-Fly List by the FBI in retaliation for their refusal to spy on their Muslim communities. The case asks the simple question, can government officials be held accountable when they coerce people to become informants and retaliate against them when they refuse? The precise legal question before the Court is whether Congress intended in the Religious Freedom Restoration Act (RFRA) for individuals to be able to receive damages when government officials have interfered with their freedom to practice their religion. We are asking the Supreme Court to affirm the court of appeals’ decision to allow our clients to pursue their claims.

For more information about the case, visit our Tanvir case page and FAQ page. 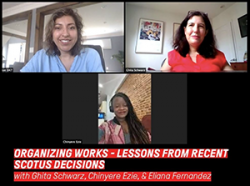 What impact can organizers have on the Supreme Court’s decisions? Our Senior Staff Attorneys Ghita Schwarz and Chinyere Ezie discuss this with Make the Road New York’s Lead Organizer Eliana Fernandez on the 30th episode of “The Activist Files.”

The organizers spoke about Wolf v. Vidal, the decision that preserves Deferred Action for Childhood Arrivals (DACA), in which Eliana was a plaintiff, and the Bostock/Zarda/Stephens cases, in which the Court found that an employer who fires an individual merely for being gay or transgender violates Title VII of the Civil Rights Act of 1964. The movement lawyers and activist agreed the organizing and narrative shifting in some of the cases had the justices so worried for the credibility of the Court that it tipped the balance in their decisions.