News: From the Streets to the Supreme Court: Protecting our Communities from Federal Repression

From the Streets to the Supreme Court: Protecting our Communities from Federal Rrpression 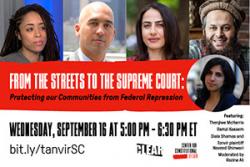 We’re just a few weeks away from Supreme Court arguments in Tanzin v. Tanvir, our case brought on behalf of American Muslims who were placed or kept on the No-Fly List by the FBI for refusing to spy on their communities. Join the Center for Constitutional Rights, CUNY School of Law, and CLEAR for a virtual panel discussion, From the Streets to the Supreme Court: Protecting our Communities from Federal Repression, from 5-6:30 p.m. ET, Wednesday, September 16.

What happened to the Tanvir plaintiffs is part of a long history of federal agents abusing tools at their disposal to target Black, Brown, and Indigenous communities—a history that is ever-present. We are seeing in real time the dizzying expanse of tools used by federal agents to target, suppress, and surveil individuals and movements across the country.

Don’t forget to register! We hope you will join us for this important discussion. 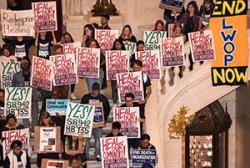 Join Senior Staff Attorney Pardiss Kebriaei and Bertha Justice Fellow Lupe Aguirre as they discuss abolishing life prison sentences with Good Pitch, which brings together documentary ﬁlmmakers with foundations, NGOs, campaigners, philanthropists, policymakers, brands, and media around leading social and environmental issues — to forge coalitions and campaigns that are good for all these partners, good for the ﬁlms, and good for society. Good Pitch is a project of Doc Society, a nonprofit committed to enabling great documentary films and connecting them to audiences globally.

Pardiss and Lupe will highlight our work in Scott v. Pennsylvania Board of Probation and Parole. They will also participate in a project from the Coalition to Abolish Death By Incarceration (CABI), called On Both Sides. CABI is a grassroots organization led by the people most impacted by mass incarceration: the men and women serving life without parole, their families, friends, and advocates.

Pardiss and Lupe will be presenting from 10 a.m. - 1 p.m. ET, Wednesday, September 16. Click here to register.

*Photo credit: 'Rally in PA Capitol to end death by incarceration' by joepiette2 is licensed under CC BY-NC-SA 2.0

The post-9/11 era has defined nearly every aspect of the 21st century. Its most striking ideologies, laws, and policies — boundless executive powers, a secret and global torture program, indefinite detention of Muslim men and boys at Guantánamo, warrantless mass surveillance, blatant disregard for international law, and colossal profits for private military contractors — are now further entrenched in American society, building on a long and already shameful history of state-sanctioned brutality and cruelty. The reverberations of 9/11 are felt far and wide, but for some, its legacy is particularly acute. For our clients, partners, and so many communities across the globe, the aftermath informs their lived realities. Nineteen years later, they are still seeking answers, justice, and healing.

In the weeks and months following 9/11, confronted with a climate of fear and uncertainty, the Center for Constitutional Rights stood up to position itself between those in power and communities under attack. Today, we are still there, resolute in our commitment to protect those still targeted and to fight impunity.

We continue to litigate against private military contractors that conspired in the torture of people held at Iraq’s Abu Ghraib prison. We are on the verge of bringing to the U.S. Supreme Court one of our several cases challenging Muslim profiling. We continue to seek international justice for the U.S.’ role in war crimes and other human rights abuses arising out of the war in Afghanistan and the global torture program. We were the first to represent men held at Guantánamo, securing their right to challenge their detention, and we will be among the last until the prison is closed.

Asylum seekers who have been turned back by U.S. Customs and Border Protection (CBP) from ports of entry along the U.S.-Mexico border asked a federal court to permanently stop the Trump administration’s Turnback Policy and declare it unlawful. Under the policy, CBP agents have rejected asylum seekers using unlawful tactics, including metering—forcing asylum seekers to get on months-long waiting lists in dangerous Mexican border towns, before they are permitted to seek asylum under U.S. law.

The motion for summary judgment filed Sept. 4 explains how U.S. law, the Constitution, and international legal principles require that asylum seekers be given access to the U.S. asylum process and prohibit them from being turned back at the border. The motion also emphasizes that asylum seekers have been seriously injured, raped, and even killed after CBP officials turned them back at ports of entry. Advocates say the policy has created a humanitarian crisis for those marooned on the Mexican side of the border and that migrants there are in serious danger of disappearances, kidnappings, rape, and sexual and labor exploitation.

“We first brought this case in July 2017— although an entire litany of horrid immigration policies have come and gone, this one is still here, still needlessly denying thousands of individuals the basic humanitarian protections they deserve,” said Angelo Guisado, staff attorney at the Center for Constitutional Rights. “I hope those families we met in 2017 know that we’re still fighting for them. We will not rest until this policy is eliminated.”