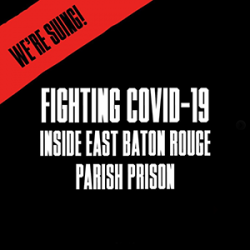 On Tuesday, several civil rights and racial justice organizations pushed back on efforts by the Sheriff and Warden of the East Baton Rouge Parish Prison to silence the detainees trapped inside the facility and to hide from community members and taxpayers what the organizations say is really happening in the jail.

The Sheriff and Warden, defendants in a federal lawsuit filed by the advocates, claim that the jail has the coronavirus pandemic under control, but the plaintiffs and other witnesses in the jail insist that nothing is further from the truth and that, in fact, the jail is experiencing a second wave of active coronavirus cases.

They say the jail is refusing to test individuals (including asymptomatic individuals who can also transmit the virus), to track the spread of the virus, or to enforce critical protective rules such as social distancing and mask-wearing.

When asked if they would undertake widely accepted safety measures like this, officials working in the jail said, “Why would we?” The plaintiffs and their witnesses call East Baton Rouge Parish Prison one of the nation’s deadliest jails and say they want the world to see what’s happening behind closed doors.

Last week, we joined 30 national, state, and local civil rights organizations in filing a “friend of the court” amicus brief in the case Fulton v. City of Philadelphia, asking the Supreme Court to reject a First Amendment challenge to laws that protect LGBTQIA+ people from discrimination. The case was brought by a Catholic Social Services agency that argued it should be allowed to discriminate against same-sex couples seeking to become foster parents because of the First Amendment. If the Supreme Court affirms this argument, it would allow entities to sidestep state and federal anti-discrimination laws, including laws that forbid discrimination based on race, due to religious or moral objections. Our brief urges the Supreme Court to stand with LGBTQIA+ parents and support the rule of law. 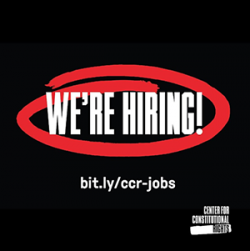 We’re hiring! The Center for Constitutional Rights is looking for a Database and Online Giving Manager to be responsible for the organization’s Constituent Relationship Management database (currently through CiviCRM) and the Development Department’s Raiser‘s Edge donor management system. This person will be responsible for online and other types of gift processing, acknowledgments, and financial reporting.

Applications are due September 16. Details, salary, and benefits and instructions on how to apply can be found on our website.